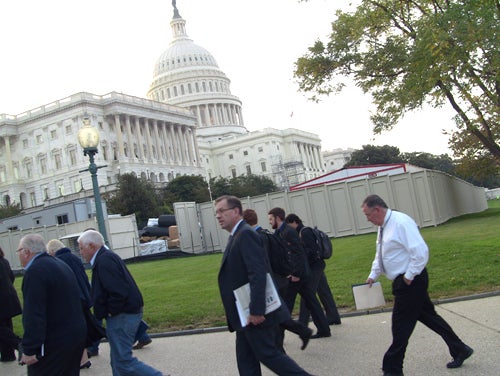 “I don’t think there will ever again be sustained economic growth.”  —U.S. Rep. Roscoe Bartlett (R–MD)

“We need to recognize that the U.S. economy is no longer capable of growing at three percent per year.”  —Jeff Rubin, former chief economist, Canadian Imperial Bank of Commerce (CIBC)

If there is one unshakable belief in America today it’s that the U.S. economy can and must continue to grow.

That’s why the messages delivered in November in Washington D.C. at a gathering of oil geologists, scientists, economists and others challenging that core belief went largely unheeded in the nation’s capital.

The approximately 300 people who attended the 7th Annual Conference of the Association for the Study of Peak Oil–USA (ASPO-USA) in the shadow of the U.S. Capitol were told that economic growth is no longer possible as oil production flattens and declines, that U.S. energy independence is impossible and that domestic shale gas will fall far short of fueling American prosperity even while polluting the nation’s vital aquifers.

“This is a place where facts don’t have the weight I would like them to have,” one congressional staffer said of Washington while meeting on Capitol Hill with a delegation from the ASPO-USA conference, held over three days at the nearby Hyatt Regency with its opening session at the Congressional Auditorium in the U.S. Capitol.

The facts presented at the conference, titled Truth in Energy, were grim. Global conventional oil production has reached a plateau after 150 years of fueling the fastest and greatest growth in history, according to various speakers, and as production heads into irreversible decline, Americans should prepare for a future of fewer jobs, less money, reduced mobility and dramatically diminished energy use.

Despite repeated conference invitations to the U.S. Department of Energy, no department representative attended, nor did a major media outlet provide coverage. Inside the Beltway, awareness of concepts like “peak oil” and “net energy” lags behind, leading to misguided and ultimately, futile, policy attempts to prolong oil-fueled prosperity.

“With oil over $100 per barrel, the U.S. economy stops growing,” echoed another speaker, Richard Heinberg, author of The End of Growth: Adapting to Our New Economic Reality. “There is no liquid fuel substitute for oil,” he said. 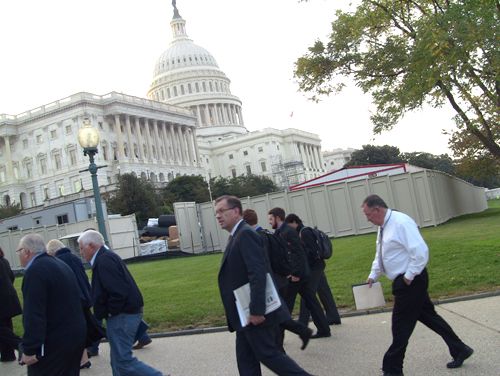 ASPO–USA conference attendees walk to a session in the Congressional Auditorium at the U.S. Capitol. (Photo by Megan Bachman)

Oil reservoirs are exhausted at a predictable rate. Likewise, we can track how fast the planet’s finite pool of petroleum is being depleted. And over the last few years, global oil production stagnated while the thirst for oil grew in developing (and populous) nations like China and India. This imbalance between supply and demand has given us recession-inducing high oil prices, conference goers were told. Those facts are not frequently disputed.

While not in attendance at the conference, influential energy industry consultant Daniel Yergin had his views challenged. Yergin argues that unconventional fossil fuels, new extraction techniques and biofuels will bridge the energy gap. But peak oil analysts at the conference insisted that those options are taking an increasing amount of energy inputs to yield the same amount of useful energy, a phenomenon known as declining net energy. As a result, there will be far less available energy.

In the U.S. in 1930 it took one barrel of oil equivalent to extract 100 barrels of oil from the ground. Today, the U.S. imports oil that yields just 19 barrels for each barrel of oil equivalent invested, despite advances in oil drilling technology and vast capital investments. Extracting the oil from unconventional formations like tar sand and oil shale takes even more energy and by some estimates, ethanol takes more energy to produce than it provides in fueling vehicles.

If Yergin, as well as Energy Secretary Steven Chu and Senate and House members, understood the simple concept of net energy, they might see that the growth fueled by cheap and easy-to-extract oil is coming to an end because alternatives to oil fall far short of meeting current energy demand. Such an understanding is also lacking among policy wonks who debate over small changes in efficiency as well as among environmentalists and Wall Street occupiers—all of whom live in communities lacking the resiliency and self-sufficiency to survive the end of the global growth economy.

The day before the conference began, a group of attendees, including myself as an ASPO-USA board member, met with congressional staffers to try to convince them, and their bosses, to at least be a little concerned about peak oil’s growth-busting potential. Congress was not by itself to blame for this lack of concern, we said, because the U.S. Energy Information Agency (EIA) annually publishes misleading production forecasts.

The week prior, ASPO-USA held a press conference on the steps to the Department of Energy calling out the agency for its false data, demanding Secretary Chu respond to facts that fly in the face of his DOE analysis, and urging the DOE to create a plan to deal with oil supply disruptions

“Pushing producers to be more transparent in their oil data sets is like slamming your head against a wall,” another congressional staffer told us during the briefings. But it’s one thing for OPEC and oil-producing nations like Saudi Arabia and Russia to lie to us, and another to be deceived by our own government.

During our congressional briefings, it felt like we were the ones slamming our heads against the wall. We were told that:

• Ethanol could free America from its dependence upon foreign oil (while at the conference chemical engineer and energy analyst Robert Rapier noted that turning all arable land in the world into biofuels would replace only 40 percent of global oil).

• Oil companies (while not acknowledging the growth killing potential of declining conventional oil production) are using the peak oil argument to speed development of unconventional fuels.

• We will always need to build more roads for more vehicles, that shale gas and “clean” coal will power America (and pollute the climate) for centuries, and that the strategic petroleum reserve is more than adequate to handle oil shortages, including if the strategically vital Straight of Hormuz leading into the Persian Gulf was blocked.

• In sum, there is no short-term oil supply problem, and there will be no long-term one.

It is not surprising that those in the seat of power won’t touch peak oil. After all, as the energy available to our society diminishes year after year, collapse is inevitable. And collapse runs contrary to the story of American ingenuity and triumph. As retired CIA analyst and now journalist Tom Whipple pointed out at the conference, America’s most dominant religion is not Christianity but the belief in economic growth, and those who contradict that core belief are heretics. 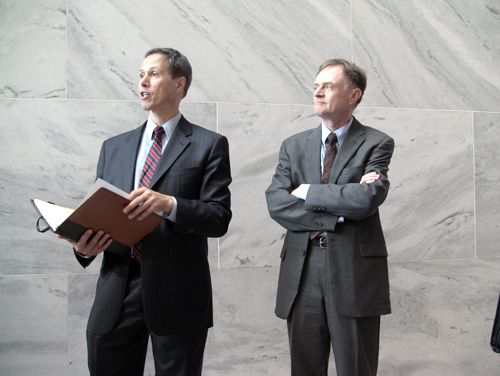 Preparing for a post-growth society might not be popular, but conference attendees nonetheless got a dose of suggestions. Agricultural researcher Wes Jackson maintained that soil is more important than oil and suggested a sustainable agricultural system based upon perennial polycultures

which use many crops within the same space to feed people, rather than rely on such annual monocultures as corn, now increasingly turned into ethanol to feed cars.

“The number one killer of our continent has been the corn plant,” Jackson said, adding that this commodity crop has eroded our once nutrient-rich soils, which prospered in diverse ecosystems. “The only true economies are natural ecosystems,” he said.

People have to take care of essential needs in their communities, according to several conference speakers, and should learn how to live off of contemporary energy (sun, wind, water) rather than finite, depleting ancient underground energy stores (fossil fuels).

“Our fetish in the modern world is having energy available on demand—we’ve built our life around that,” said author and conference speaker John Michael Greer. “But the rest of the world has dealt with a world where you use energy only when it’s there.”

Contrary to some claims at the conference that clean, renewable energy can provide as much energy to power industrial society as fossil fuels, Greer and others argued that one way or another we will have to live with far less energy and that hoping for a green utopia, rather than building household and local resiliency in the face of peak oil, is more likely to end in misery and despair.

Greer said the “alternative to industrial society is not living in caves.” As he sees it, the alternative is returning to a normal, far less energy-intense human existence.

Sociologist William Catton referred to our abnormal, energy appetite as Homo Colossus. “We were becoming a different kind of creature,” he said of the dawn of the fossil-fuel era, adding that the average American today is equivalent to a 41-ton dinosaur in daily energy use.

As global oil extraction declines, economic growth halts and ecological deficits mount, Americans face a moral choice, Catton said. “We have to forgo luxuries, or others will forgo necessities,” he said.