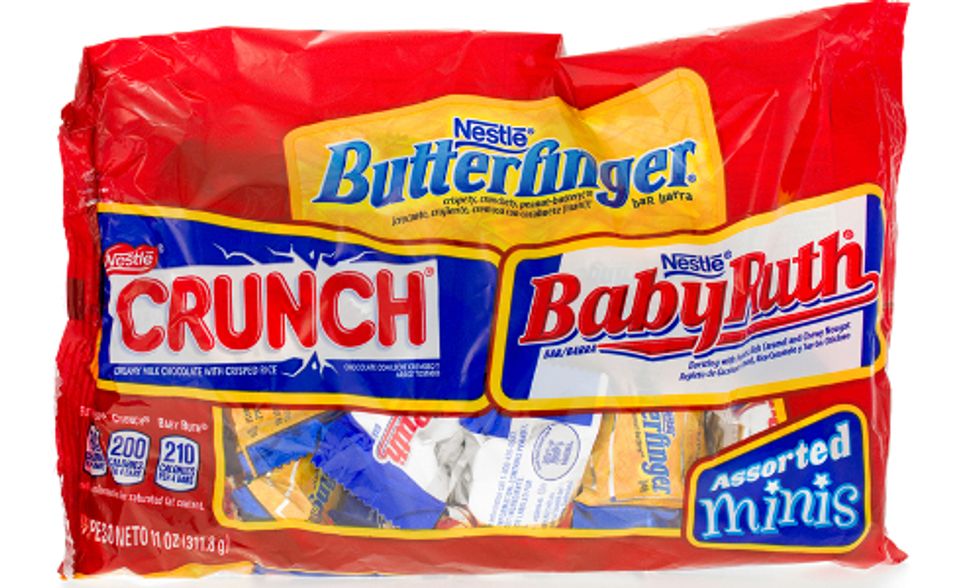 They still won't be health foods, but Nestlé, the world's largest food company, has announced it will remove artificial coloring and flavoring from all its candy products sold in the U.S. It will be phasing them out throughout the year and plans to have removed them all by the end of 2015. The company said they will start arriving in stores by the middle of the year and will be identified by the words "No artificial flavors or colors" on the packaging. The move will affect 10 brands and more than 250 products including legacy candies like Butterfinger, Baby Ruth, Oh Henry!, Sno-Caps and Raisinets, dating back to the 1920s.

These are among the Nestlé-brand candies that will no longer have artificial flavors and colors by the end of 2015.
Photo credit: Shutterstock

“We know that candy consumers are interested in broader food trends around fewer artificial ingredients," said Doreen Ida, president for USA Confections & Snacks. "As we thought about what this means for our candy brands, our first step has been to remove artificial flavors and colors without affecting taste or increasing the price. We’re excited to be the first major U.S. candy manufacturer to make this commitment.”

The company will substitute natural ingredients for the artificial ones. For instance, in the Butterfinger, it will replace Red 40 and Yellow 5 with annatto, a carotenoid-based food coloring which comes from the seeds of the tropical achiote tree. And it will replace artificial vanillin with real vanilla in the Crunch bar.

Despite the self-congratulation and despite calling itself "the world's leading nutrition, health and wellness company," Nestlé been under fire from healthy food activists for failing to do in the U.S. what it has already done in Europe, although not entirely of its own will. In 2010, the EU began requiring warning labels on products containing six artificial dyes that have been linked to hyperactivity in some children, so many companies chose to drop those ingredients.

According to The Guardian, Nestlé UK actually took the step of removing the ingredients years ago. In an article dated Aug. 10, 2008, it said, "Major manufacturers such as Cadbury Trebor Basset, Nestlé UK and Unilever, as well as own-brand retailers such as Tesco, Asda and Marks & Spencer, say they either do not use the colourings or will have removed them by the end of the year, well in advance of Britain's voluntary ban, which starts at the end of 2009."

The U.S. Food and Drug Administration (FDA) has so far made no steps in that direction. Red 40 and Yellow 10, two of the ingredients Nestlé is removing, have been approved for human consumption by the FDA, despite some studies and pressure from groups such as the Center for Science in the Public Interest, which has organized petition campaigns directed both at the FDA and food companies, urging the to remove the additives.

Even the FDA Doesn't Know What Chemicals Are in Your Food