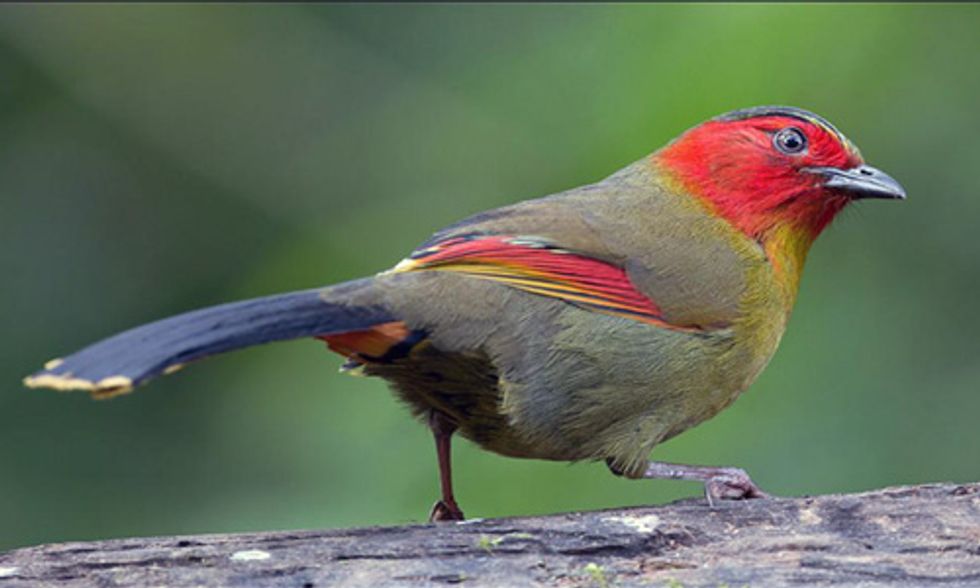 A team of bird-watchers stumbled upon a bird that hasn't been seen in eastern Nepal for almost 200 years.

The red-faced liocichla (Liocichla phoenicea) hasn't been spotted for 178 years and was thought to be locally extinct, according to Australian Geographic. A group of ornithologists spotted the bird on a 10-day bird watching tour.

“We were excited when we first spotted a pair of red-faced liocichla in the forest," Hem Sagar Baral, of the Zoological Society London and leader of the tour, told the Kathmandu Post. “The sighting of the bird after more than a century and a half has raised hopes of finding more such species that have not been sighted for a very long time."

The bird-watching group originally saw just two red-faced liocichlas, but when they returned to the spot the next day, they saw eight birds, including a male-female pair, Australian Geographic reported.

“When we confirmed it was the red-faced liocichla we all felt so happy—we were so excited," Tikaram Giri, a senior field ornithologist, said. “We never thought and never expected to see it so easily."

The red-faced liocichla is widely distributed throughout Vietnam, Bhutan, Laos, Myanmar and Bangladesh.

Discoveries of species previously thought to be extinct are not uncommon, Australian Geographic said. Several species of birds, mammals, insects, reptiles and plants have been rediscovered after years of no sightings.

Diana Fisher, University of Queensland fellow, said about a third of all mammals ever feared to be extinct have been rediscovered.

“There are large numbers of poorly known species around the world only known from a single museum specimen as well," Fisher told Australia Geographic. “So it is hard to know anything much about them or where they exist."

But there is still reason for the bird-watching group in Nepal to celebrate.

Nepal is home to 878 species of birds, 8 percent of the world's known birds. Even with the abundance, a lot of the species are close to being labeled as threatened.

“Nearly 20 percent of Nepal's birds (167 species) are threatened with extinction in the country including 37 species which are threatened on a global scale," the Zoological Society London wrote.

Another 62 species are closing in on having a threatened status, the Weather Channel reported. Nine species are believed to be extinct in Nepal because they have not been spotted since the 19th century.