Why It’s Time to Curb Widespread Use of Neonicotinoid Pesticide 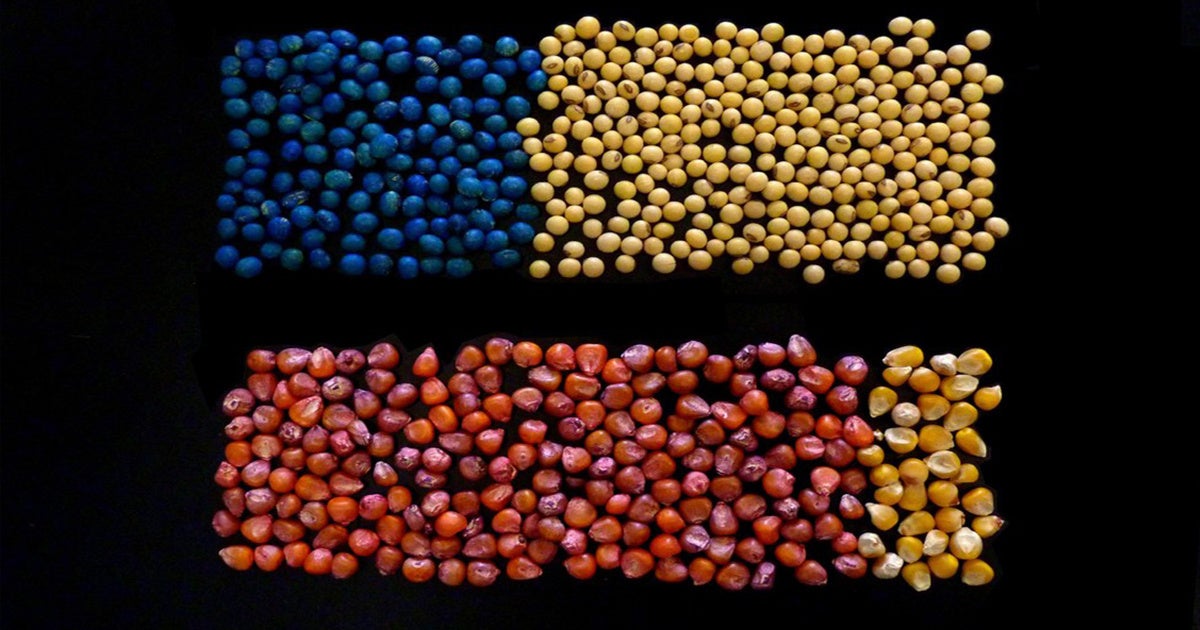 Planting season for corn and soybeans across the U.S. corn belt is drawing to a close. As they plant, farmers are participating in what is likely to be one of the largest deployments of insecticides in U.S. history.

Almost every field corn seed planted this year in the U.S.—approximately 90 million acres’ worth—will be coated with neonicotinoid insecticides, the most widely used class of insecticides in the world. The same is true for seeds in about half of U.S. soybeans—roughly 45 million acres and nearly all cotton—about 14 million acres. In total, by my estimate, these insecticides will be used across at least 150 million acres of cropland, an area about the size the Texas.

Neonicotinoids are very good at killing insects. In many cases they require only parts per billion, equivalent to a few drops of insecticide in a swimming pool of water.

In recent years, concerns have been raised about the influence of neonicotinoids on bee populations. As an applied insect ecologist and extension specialist who works with farmers on pest control, I believe the focus on bees has obscured larger concerns. In my view, U.S. farmers are using these pesticides far more heavily than necessary, with potential negative impacts on ecosystems that are poorly understood.

Most neonicotinoids in the U.S. are used to coat field crop seeds. Their role is to protect against a relatively small suite of secondary insect pests—that is, not the main pests that tend to cause yield loss. National companies or seed suppliers apply these coatings, so that when farmers buy seed, they just have to plant it. 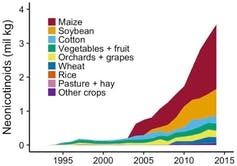 The percentage of corn and soybean acreage planted with neonicotinoid seed coatings has increased dramatically since 2004. By 2011, more than 90 percent of field corn and 40 percent of soybeans planted were treated with a neonicotinoid. Between 2011 and 2014, the area treated crept toward 100 percent for corn and 50 percent for soybeans. And the mass of neonicotinoids deployed in each crop doubled, indicating that seed suppliers applied about twice as much insecticide per seed. Unfortunately, many farmers are unaware of what is coated on their seeds, while others like the peace of mind that comes from an apparently better protected seed.

Unlike most insecticides, neonicotinoids are water soluble. This means that when a seedling grows from a treated seed, its roots can absorb some of the insecticide that coated the seed. This can protect the seedling for a limited time from insects. But only a small fraction of the insecticide applied to seeds is actually taken up by seedlings. For example, corn seedlings only take up about 2 percent, and it only persists in the plant for two to three weeks. The critical question is where the rest goes.

Clothianidin is a neonicotinoid used almost exclusively as a coating on seed corn. Maps from USGS.

Because neonicotinoids are water soluble, the leftover insecticide not taken up by plants can easily wash into nearby waterways. Neonicotinoids from seed coatings are now routinely found polluting streams and rivers around the country.

Here it is likely that they are poisoning and killing off some of the aquatic insects that are vital food sources for fishes, birds and other wildlife. In the Netherlands, neonicotinoids in surface waters have been associated with widespread declines in insectivorous bird populations—a sign that concentrations of these insecticides are having strong effects on food webs.

Neonicotinoids also can strongly influence pest and predator populations in crop fields. My lab’s research has revealed that use of coated seeds can indirectly reduce crop yield by poisoning insect predators that usually kill slugs, which are important crop pests in mid-Atlantic corn and soybeans fields.

More broadly, planting coated seeds generally decreases populations of insect predators in crop fields by 15 to 20 percent. These predatory insects can eat insect pests, such as black cutworm and armyworm, that can reduce yield. Crop fields with fewer resident predators are more vulnerable to pest infestations. 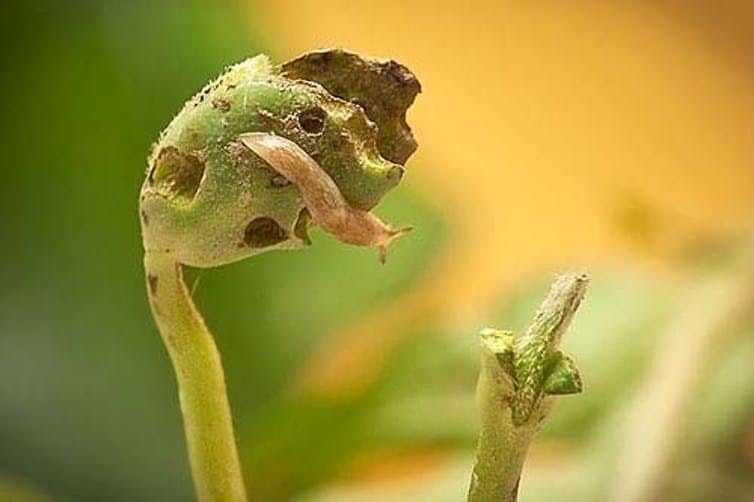 Slugs, shown here on a soybean plant, are unaffected by neonicotinoids, but can transmit the insecticides to beetles that are important slug predators. Nick Sloff / Penn State University, CC BY-ND

Neonicotinoid advocates point to reports—often funded by industry—which argue that these products provide value to field crop agriculture and farmers. However, these sources typically assume that insecticides of some type are needed on every acre of corn and soybeans. Therefore, their value calculations rest on comparing neonicotinoid seed coatings to the cost of other available insecticides.

History shows that this assumption is clearly faulty. In the decade before neonicotinoid seed coatings entered the market, only about 35 percent of U.S. corn acres and 5 percent of soybean acres were treated with insecticides. In other words, pest populations did not cause economically significant harm very often.

Importantly, the pest complex attacking corn today is more or less the same as it was in the 1990s. This suggests that it is not necessary to treat hundreds of millions of acres of crops with neonicotinoid seed coatings.

From Overkill to Moderation

Should the U.S. follow the European Union’s lead and pass a broad ban on neonicotinoids? In my view, action this drastic is not necessary. Neonicotinoids provide good value in controlling critical pest species, particularly in vegetable and fruit production. However, their use on field crops needs to be reined in.

In the Canadian province of Ontario, growers can only use neonicotinoid seed treatments on 20 percent of their acres. This seems like a good start, but does not accommodate farmers’ needs very well.

Integrated Pest Management (IPM), a control strategy based on using pesticides only when they are economically justified, offers valuable guidelines. It was introduced in the late 1950s in response to issues stemming from overuse of insecticides, including environmental damage and pest populations that had evolved resistance. Field-crop growers have a good history of using IPM, but current use of neonicotinoids ignores pest risk and conflicts with this approach.

To implement IPM in field crops with neonicotinoids, seed companies need to acknowledge that the current approach is overkill and poses serious environmental hazards. Extension entomologists will then need to provide growers with unbiased information on strengths and limitations of neonicotinoids, and help farmers identify crop acres that will benefit from their use. Finally, the agricultural industry needs to eliminate practices that encourage unnecessary use of seed coatings, such as bundling together various seed-based pest management products, and provide more uncoated seeds in their catalogs.

These steps could end the ongoing escalation of neonicotinoid use and change the goal from “wherever possible” to “just enough.”