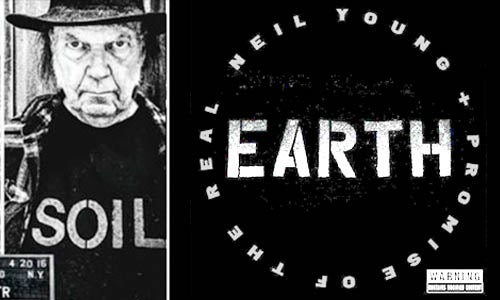 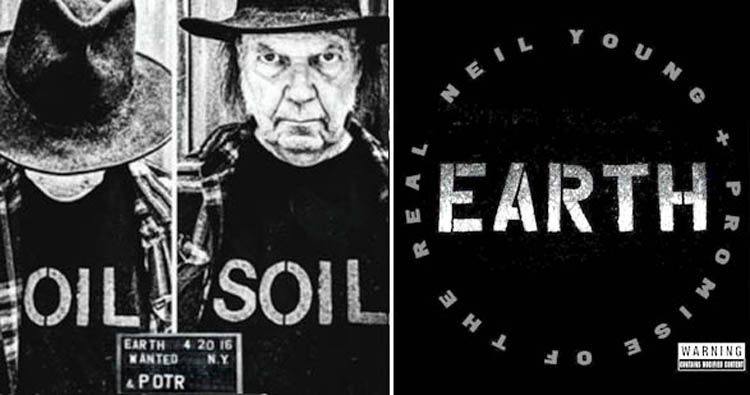 We made a live record and every creature on the planet seemed to show up. Suddenly all the living things of Earth were in the audience going crazy. Then they took over the stage, letting their wild sounds mingle with the Vanilla Singers perfect corporate harmony. Earth’s creatures let loose, there were Bee breakdowns, Bird breakdowns and yes, even Wall Street breakdowns, jamming with me and Promise of the Real! The show was non stop bliss for 98 minutes, no breaks. EARTH does not fit on iTunes. It breaks all their rules (and couldn’t all really be heard that way anyway) No one who was there will ever forget the love, wonder and beautiful madness of EARTH. I know I won’t. Neil

EARTH consists of recordings from Young’s tour last year with the band Promise Of The Real for his preceding album, The Monsanto Years. AlterNet described Young’s 36th studio album, as a “concept-based criticism” of Monsanto, the world’s biggest seed company, and also a condemnation of other multinational agriculture giants like Syngenta, Dow, Dupont and Bayer that have also, like Monsanto, “garnered control of global seed production.”

Promise Of The Real guitarist Lukas Nelson lauded the new LP. “I just listened to our new record EARTH with Neil Young … One of the single greatest audio experiences I’ve ever had,” he wrote on Instagram.

The world premiere of EARTH will be hosted by the Natural History Museum in Los Angeles on May 6. And, according to an announcement about the event, it’s sure to be spectacular:

Against the backdrop of the Museum’s blossoming outdoor Nature Gardens, musician and icon Neil Young will present the first public playback of his upcoming release, EARTH, in its entirety in Pono high definition fidelity audio, before its June 17 release. The album features “After the Gold Rush,” “Vampire Blues,” and an explosive 29-minute version of “Love & Only Love,” and includes some unexpected accompaniment—the sounds of many different kinds of wildlife.

The Grammy Award-winning artist and environmental crusader said in a press release that EARTH “flows as a collection of 13 songs from throughout my life, songs I have written about living here on our planet together. Our animal kingdom is well represented in the audience as well, and the animals, insects, birds, and mammals actually take over the performances of the songs at times.”

Young also told Rolling Stone last year that EARTH is “like nothing that I’ve done. It’s more like a giant radio show.”

“It has no stops,” he continued. “The songs are too long for iTunes, thank God, so they won’t be on iTunes. I’m making it available in the formats that can handle it … Imagine it’s a live show where the audience is full of every living thing on Earth. And also they overtake the music once in a while and play the instruments. It’s not conventional, but it is based on live performance.”

On Tuesday, Young kicked off his 2016 world tour with Promise Of The Real in New Braunfels, Texas with guest star and legendary rocker Willie Nelson.

The tour then stopped by Nashville, Texas’s Ascend Amphitheater yesterday. The concert received rave reviews from local publication, The Tennesseean:

At 70 years old, the rock icon hasn’t lost a step. His voice is still in fine form, and the audience sang along reverently to every word of classics like “Heart of Gold” and “Long May You Run.” After an opening set from singer-songwriter Steve Earle (whose debut album “Guitar Town” turned 30 this year) and half a dozen of his own solo songs, Young brought out his backing band Promise of the Real: Five rootsy rockers including Willie Nelson’s sons, Lukas and Micah Nelson—and played another 90 minutes.

1. “People Want to Hear About Love” (from The Monsanto Years)

6. “Western Hero” (from Sleeps With Angels)

8. “Hippie Dream” (from Landing On Water)