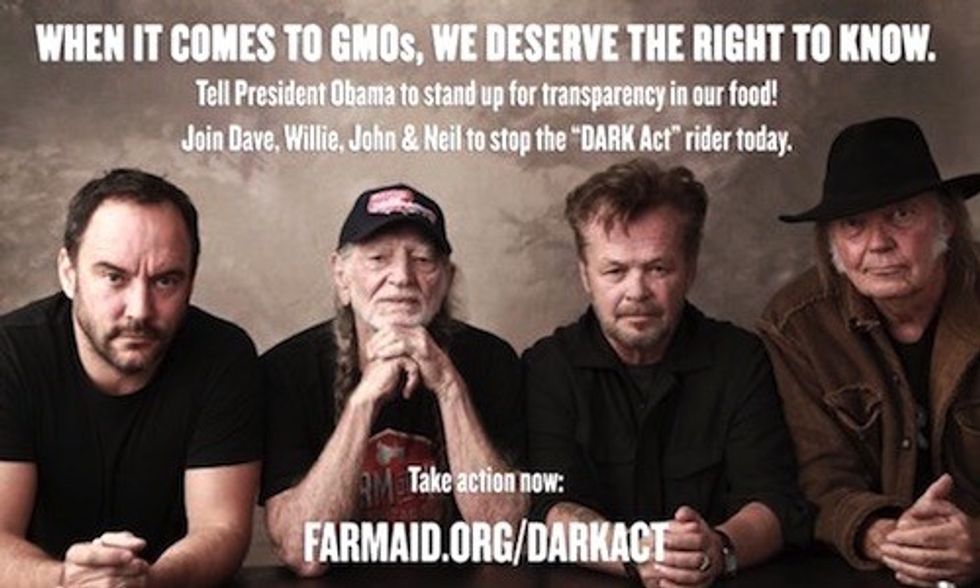 Dave Matthews, Willie Nelson, John Mellencamp and Neil Young are speaking out against the controversial Safe and Accurate Food Labeling Act (H.R. 1599), also known as the Deny Americans the Right to Know, or DARK Act.

The legislation would require the Food and Drug Administration (FDA) to regulate the distribution and labeling of genetically modified foods (GMOs), thus preempting states' rights to label GMOs themselves.

Dave Matthews, Willie Nelson, John Mellencamp and Neil Young join the overwhelming margin of American voters who say consumers should have the right to know if their food is genetically modified. Photo credit: Farm Aid

The famous musicians, who serve as board members of Farm Aid, signed a joint letter calling on President Obama to stop the DARK Act rider, which some lawmakers in Congress are trying to sneak onto to the year-end omnibus spending bill.

"Giant food, chemical and biotech corporations have spent millions of dollars to block our right to know what's in our food. Their latest effort is to pass what's been called the DARK (Deny Americans the Right to Know) Act," Farm Aid wrote on a Facebook post last Friday. "It would preempt GMO labeling laws already passed in Connecticut, Maine and Vermont and obstruct mandatory federal labeling of GMOs."

In their joint letter, Matthews, Nelson, Mellencamp and Young bring up the "clear public support for labeling and transparency in the food system." According to Just Label It, 89 percent of American voters are in support of mandatory GMO labeling.

Additionally, the letter states, "That same right is already held by citizens in 64 countries and it is a right that we, as board members of Farm Aid, have fought to attain for some time."

Farm Aid is a nonprofit organization that organizes its famous annual benefit concert to raise money for family farmers in the U.S. Nelson, Young and Mellencamp organized the first Farm Aid concert on Sept. 22, 1985, in Champaign, Illinois. Matthews joined the Farm Aid board of directors in 2001. The 30th anniversary of Farm Aid was held on Sept. 19, 2015 in Chicago, Illinois. To date, Farm Aid has raised $48 million for the country's family farmers.

"This is an issue that matters dearly to farmers and eaters alike," the letter continues. "As citizens, we believe transparency is fundamental to our democracy and indispensable to a fair and competitive marketplace. It is unconscionable that the will of multinational corporations would trump something so essential to American life."

Introduced by Rep. Mike Pompeo of Kansas, H.R. 1599 passed the House of Representatives in July and currently languishes in the Senate.

Unless it's stopped by a federal ban, Vermont's law will have far-reaching implications for the labeling of GMO food products in the U.S. For instance, once (or if) Vermont's law kicks off, it will trigger Connecticut's and Maine's own GMO labeling mandates.

"The White House has a critical role in shaping the outcome of this rider," the letter concludes. "There is no room for corporate riders like this in the omnibus appropriations bill and we urge you to stand up for what Americans want."

Read the full signed letter below. Those interested in joining the rockers' cause can visit this link.