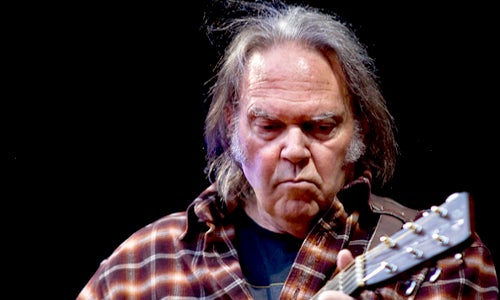 Neil Young’s latest tour, Honor the Treaties and also featuring Diana Krall, is a music tour with a political message.

Young is using his spotlight to draw attention to the massive injustice and environmental degradation associated with tar sands development in Alberta. In an interview regarding the message of his tour, Young said:

Canada is trading integrity for money, that’s what’s happening under the current leadership in Canada… It’s an embarrassment to any Canadians.

The Honor the Treaties tour began on Jan. 12 in Toronto and ends on Jan. 19 in Calgary. Prior to each concert, Young is taking part in a press conference about oil sands development alongside environmentalist Dr. David Suzuki, Chief Allan Adam of the Athabasca Chipewyan First Nation, and climate scientists.

All the proceeds from the Honor the Treaties tour go to the legal defense fund of the Athabasca Chipewyan First Nation (ACFN). ACFN spokesperson Eriel Deranger said:

We are honored that Neil Young and Diana Krall are standing with ACFN during this crucial time. Our struggle to preserve the Athabasca Delta isn’t about us but for all Canadians who care about protecting our lands.

The ACFN has been embroiled in a legal battle on several fronts against both the Canadian government and the extractive industry, challenging the encroachment of tar sands development into their land and the violation of their treaty rights.

In Dec. 2013, Shell Oil received approval from the federal government to nearly double the size of its Jackpine Mine in ACFN territory on the Athabasca River.

The Jackpine Mine expansion would devastate the river and its surrounding ecosystem, and severely limit the ability of the AFCN to practice their traditional livelihood—a right that is guaranteed to them in treaties between the sovereign leadership of the First Nations and the nation of Canada. To make matters worse, Shell has also proposed a new, additional mine in northern Alberta, the Pierre River Mine. The ACFN are taking legal action against both projects to protect their people, land and way of life.

If the Canadian government goes forward with its plan to fully extract the Alberta oil sands, the consequences of the development have been described as “game over for the planet.” The mining, refining and combustion of the oil sands would emit dangerous amounts of greenhouse gases that could warm the world past a global climate tipping point.

Because of these global consequences, Young is asking for widespread support of the ACFN legal defense. Early indications show that the public is behind Young, as initial polls suggest Young’s comments are supported by nearly 70 percent of respondents.

I want my grandchildren to grow up and look up and see a blue sky and have dreams that their grandchildren are going to do great things and I don’t see that today in Canada. I see a government just completely out of control.