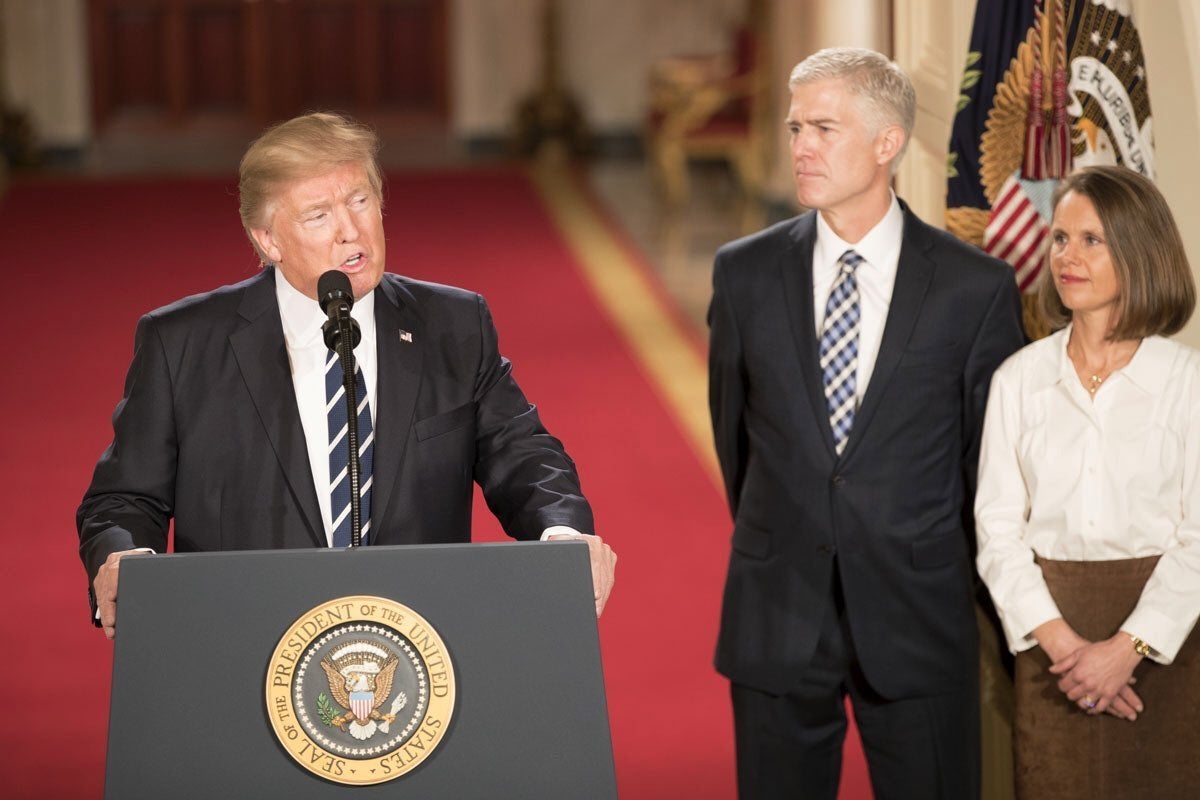 President Donald Trump‘s nomination of Judge Neil Gorsuch to the Supreme Court has been criticized by environmental groups and human health advocates, who fear that the conservative judge would side with corporations, limit the federal government’s regulatory responsibilities, and gut environmental and health protection if confirmed.

The 49-year-old federal appeals court judge from Colorado has been described as an “heir” to the late Justice Antonin Scalia, whose seat Gorsuch would be filling.

During his announcement Tuesday, Trump praised Gorsuch for being a principled constitutionalist. “Judge Gorsuch has a superb intellect, an unparalleled legal education, and a commitment to interpreting the Constitution according to its text,” Trump said.

Gorsuch said in the East Room, “I pledge that if I am confirmed I will do all that my powers permit to be a faithful servant of the Constitution and laws of this great country.”

Several news outlets have noted that his mother, Anne Gorsuch Burford, served as U.S. Environmental Protection Agency (EPA) director under President Ronald Reagan. She has been accused of wanting to dismantle the agency and notoriously resigned under fire after serving 22 months in the administration over mismanagement of a $1.6 billion program to clean up hazardous waste dumps.

Earthjustice, the nation’s largest environmental law organization, is calling on the Senate to reject Gorsuch as Supreme Court Justice, citing his history of rulings against workers’ rights, that he’s a friend of big business, that he has shown hostility to the rights of the disabled and that he has protected police officers charged with excessive force.

Gorsuch is perhaps best known for the case, Hobby Lobby Stores, Inc. v. Sebelius, in which he agreed with the majority opinion that corporations are persons and should not be required to pay for contraceptive coverage under the Affordable Care Act.

“Gorsuch has a lengthy record of decisions that seek to benefit corporations and restrict the federal government’s regulatory responsibilities. His decisions also reflect a history of limiting the rights of women, the disabled, workers, and many others,” said Earthjustice President Trip Van Noppen.

“A review of Gorsuch’s writings and decisions indicate that he would seek to overturn well-established Supreme Court precedents and prevent the federal government from enforcing bedrock environmental laws such as the Clean Air Act and Clean Water Act,” Van Noppen said. “Gorsuch’s record suggests he would take the court in a far-right direction doing irreparable harm to the health of communities, while failing to protecting wildlife, our public lands and restricting efforts to combat climate change.”

The international climate campaign 350.org called Gorsuch “a friend of big polluters and a foe of workers, the disabled and the environment.”

“With Trump torching the Constitution and the climate, now isn’t the time to approve an extreme Supreme Court nominee. Gorsuch is a friend of fossil fuel companies and a foe of workers, the disabled, and the environment,” said 350.org Executive Director May Boeve. “Millions of people are marching in the streets to resist Trump’s radical agenda and our counting on their Senators to join them. This couldn’t be a clearer test of whose side politicians are really on.”

“Neil Gorsuch, empowered by spineless Congressional Republicans and an incompetent and malicious Trump administration, could inflict serious damage to people in this country,” Leonard said. “We need the U.S. Supreme Court to protect the people’s rights to live free, safe and equal lives and to uphold federal laws like the Clean Power Plan which help ensure our right to survival and limit the human and environmental impact of climate change.”

“There is no evidence in Gorsuch’s track record that indicates he would be a champion for these legal protections, but an abundance of evidence indicates that he would be a champion for corporate protections,” she added. “With this Supreme Court nomination, political forces like the Heritage Foundation and the Koch Brothers are applauding a step towards a democracy powered by the wealthy.”

The Center for Biological Diversity said that based on Gorsuch’s track record, he will consistently rule in favor of wealthy corporate interests at the expense of environmental safeguards, civil rights and social justice.

Kierán Suckling, executive director of the Center for Biological Diversity, also pointed out that Trump’s pick for the Supreme Court was made possible only by the extraordinary, unprecedented, year-long blockade by Senate Republicans of President Obama’s pick of DC Circuit Judge Merrick Garland.

“We should never forget that this was a stolen seat,” Suckling said. “Gorsuch should be filibustered, and every Democrat of conscience should vote against his confirmation. Putting him onto our highest court could inflict incredible, irreversible damage upon our nation’s natural heritage.”

The Sierra Club, which joined a rally against Trump’s pick on the steps of the Supreme Court on Tuesday, has also opposed the pick.

“As the highest court in the country, the Supreme Court must be composed of justices that are fair, even-handed, and thoughtful,” Sierra Club Executive Director Michael Brune said. “Unfortunately, Judge Gorsuch, Donald Trump’s choice to fill the vacancy on the Supreme Court, is none of those things and must be rejected. Gorsuch has proven himself hostile to environmental protection, women’s rights, and the rights of workers and cannot be trusted to protect our air, our water, or our communities.

“The Supreme Court has the responsibility of deciding on the cases that protect everything from our clean air and water to our civil rights and liberties. Gorsuch is not fit for that responsibility. Gorsuch has shown he will prioritize his warped ideological views instead of using our Constitution as a guide. His dangerous views favor polluters and industry over the rights of the people. His record shows that he will limit the access of everyday Americans to the courts and prevent agencies like the EPA from fulfilling their mission and doing their job to protect our air, water, and health. He’s even been described as more extreme than Justice Scalia.”