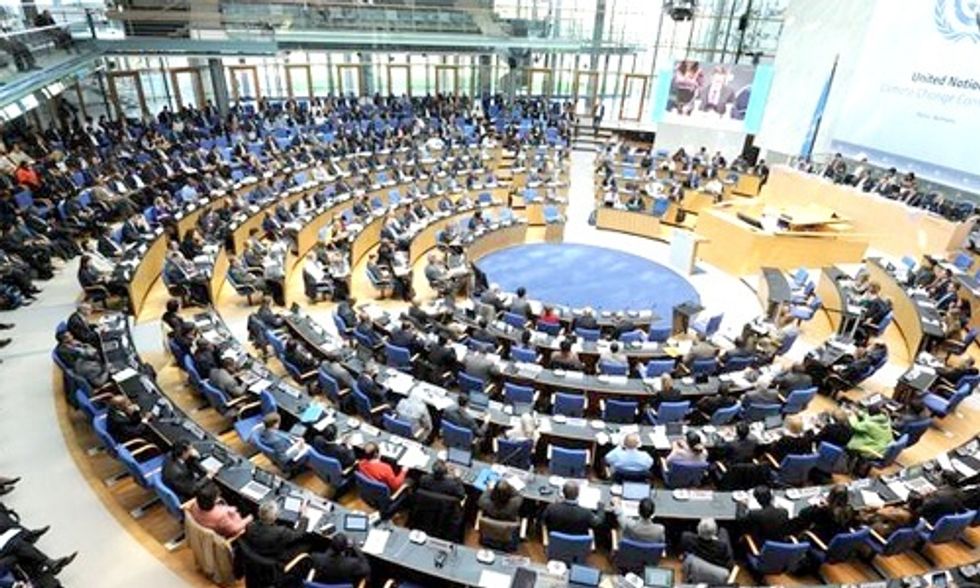 The text of the agreement on how the world will tackle climate change and set targets that will keep global temperatures from rising more than 2°C above pre-industrial levels is being negotiated in Bonn this week.

What’s happening in Bonn and why it matters for the global climate challenge: http://t.co/XkWZ3XyU5f #SB42 #COP21 pic.twitter.com/BOISZSi2MC

The 2°C limit has been set by politicians to prevent the planet overheating dangerously—but the cuts in carbon emissions required to achieve it have so far not been agreed.

It is this gap between the policy goals agreed by world leaders and their lack of action to achieve them that the Bonn conference seeks to address.

The meeting, which opened today, will last for 10 days as working groups grapple with action to reduce carbon emissions, how to finance technology transfer, and how to adapt to sea level rise and other unavoidable consequences of present warming—such as the current heatwave affecting India, where temperatures in some southern states have topped 47°C.

Scientists and environmental groups have said that this year’s negotiations are humanity’s “Last Chance Saloon.” If steep emissions cuts are not agreed upon and implemented quickly, the global temperature has little chance of staying under 2°C—with devastating consequences for the natural world and human civilization.

There are signs that momentum towards agreement is increasing. A report by Globe International, which will be given to delegates, reveals that three-quarters of the world’s annual emissions of greenhouse gases are now limited by national targets.

The 2015 Global Climate Legislation Study shows that the number of climate laws and policies aimed at limiting emissions passed by national governments had increased to 804 this year, up from 426 in 2009 when the Copenhagen climate talks collapsed, and from just 54 in 1997 when the Kyoto Protocol was agreed.

The lead author of the study, Michal Nachmany, a researcher at the Grantham Research Institute on Climate Change, says: “With three-quarters of the world’s greenhouse gas emissions now covered by national targets, we can be more confident about the credibility of the pledges that countries will make ahead of the crucial summit in Paris.

“While collectively these pledges are unlikely to be consistent with the international goal of avoiding global warming of more than 2°C, the existence of national legislation and policies should provide the opportunity for countries to strengthen the ambition of their emissions cuts after the summit.”

Professor Samuel Fankhauser, co-director of the Grantham Institute and co-author of the study, says: “Every five or so years, the number of climate laws and policies across the world has doubled. This growing amount of legislation provides evidence that the world’s major emitters are taking serious steps to tackle climate change in their countries.

“By writing their intentions into law, the world’s leaders have shown that international climate change talks do lead to national action in the vast majority of countries.”

The problem is, as the report points out, that current targets and timetables to achieve them are not enough to limit greenhouse gases sufficiently to get below the agreed 2°C limit.

However, politicians are coming under pressure to improve their pledges. Ahead of the Bonn meeting, a business summit in Paris showed that many companies are pushing their political leaders for action.

This is a marked change from the last two decades, a time when the fossil fuel industry has lobbied to slow decisions on tackling climate change.

Christiana Figueres, executive secretary of the UN Framework Convention on Climate Change, the organizer of the Bonn conference, says: “With some 200 days to the UN climate convention conference in Paris, the growing momentum for change and for action is rapidly gaining ground across countries, companies, cities and citizens.

“News of yet another group of stakeholders committing to long-term emission reduction targets or ambitious investments in renewable energies is emerging almost daily—building confidence and a sense of ‘can do’ among nations as we enter the final six months of 2015.”

Whether this optimism is justified will be seen in the next week as the working groups refine the technical agreements that heads of governments are expected to sign in Paris in December.

Among the many recurring problems that have created a stumbling block is the amount of money pledged by rich nations to developing countries to help them avoid fossil fuel use and adapt to climate change. So far, the pledges to provide billions of dollars in technical help and adaptation have not been followed by the cash.

As well as trying to seal an agreement for action after 2020, the Bonn conference is also working to accelerate action in the five years until then—which are currently covered by no legally-binding international agreement. The particular focus here will be on scaling up the use of renewable energy and energy efficiency in urban areas.

The fact that China and the U.S. are now working together to reach an agreement in Paris is also helping move the talks along.

However, some developing countries, notably India, are still saying their priority is lifting their poor out of poverty, rather than reducing their emissions.

To this end, India is exploiting far more of its coal reserves, and jeopardizing hopes of global reductions in emissions.