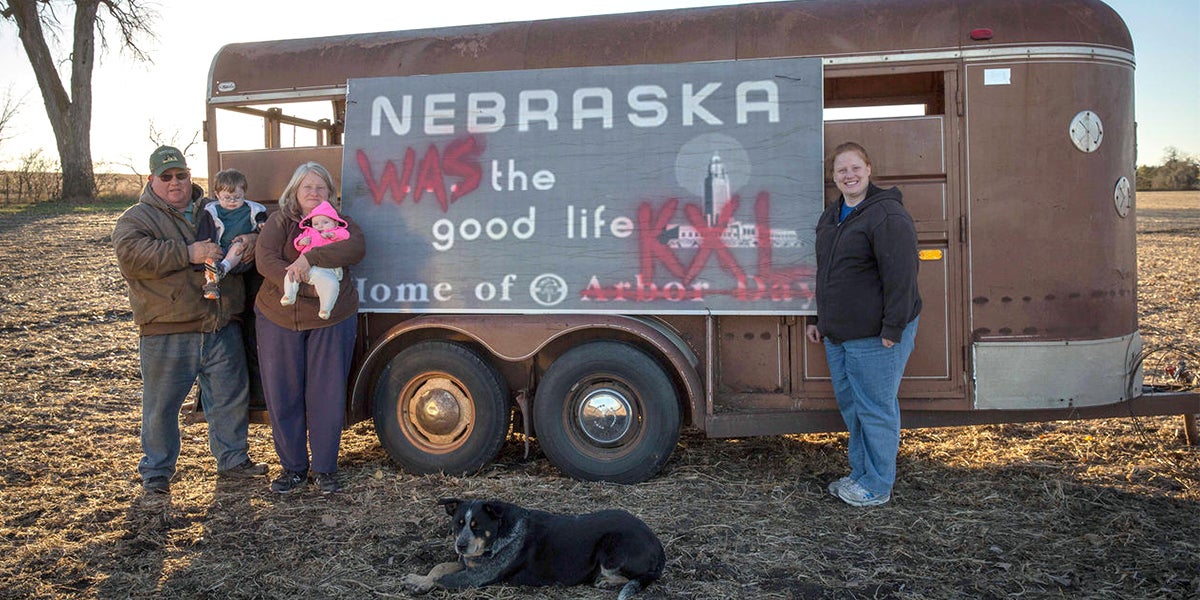 When TransCanada began knocking on doors throughout Nebraska in 2008, most residents didn’t know much about its Keystone XL pipeline or the dirty tar sands oil it would be transporting. The energy company was negotiating easements with local landowners in order to secure a route for its multibillion-dollar project—which would run north to south through the state, directly through the Ogallala Aquifer and across hundreds of Nebraskan rivers and streams. TransCanada threatened landowners with eminent domain if they didn’t comply.

Although the company had some early takers, many Nebraskans along KXL’s proposed route questioned the pipeline’s safety, the risks to their water supply, and the legality of TransCanada’s tactics. With the help of an organizer named Jane Kleeb, they banded together as Bold Nebraska to forge a unified resistance to Keystone XL.

Following years of protest and courtroom battles, a rigorous U.S. State Department environmental review that echoed the concerns of pipeline resisters, and the conflicting decisions of President Obama to reject it and President Trump to later reauthorize it, the bold Nebraskans haven’t given up. After all, as Anthony Swift, director of NRDC’s Canada project, said, “There’s no question that Nebraskans know more than most people how high the stakes are with regard to Keystone XL.”

So, on the KXL front lines in the Cornhusker State, it’s now up to the Nebraska Public Service Commission (PSC) to approve or deny TransCanada’s permits for construction. (The battle is simultaneously playing out in federal court in Montana, where NRDC is suing the Trump administration for unlawfully approving the project.)

Without a route though Nebraska, Keystone XL can’t move forward, and landowners are making sure the five-person commission hears their objections. Many testified during public hearings held this spring, and some will return to the podium as registered intervenors in August, when five days of formal arguments will precede an official decision on the pipeline as soon as September.

Below, several of the intervenors share their stories of resistance:

It wasn’t long after Art and Helen Tanderup retired that TransCanada began trying to claim areas of the couple’s 160-acre farm—owned by Helen’s family for more than a century—so the company could run its Keystone XL pipeline a mere 600 feet from the Tanderups’ house in the state’s eastern sandhills and directly over the Ogallala Aquifer, a primary source of water for a vast stretch of the country’s agricultural heartland. “We have two kids, and we hope to pass this farm on to them and our grandchildren,” Art said. “If this pipeline’s here, we don’t know what we’ll do.”

Their land, which is situated along the historic Ponca Trail of Tears, has since become a hub for the KXL resistance in Nebraska. Landowners and Native Americans whose properties and heritage are directly threatened by the pipeline have joined forces here. Together, they’ve created massive crop art, welcomed supporters for the Harvest the Hope concert (featuring Neil Young and Willie Nelson), and organized the annual sacred Ponca corn planting and harvest.

Part of the battle cry for the pipeline-fighting Tanderups and others has been to “leave tar sands in the ground” and invest instead in renewable energy sources as a means to address global climate change. And the Tanderups have put their money where their mouths are, by installing solar power on their farm and purchasing an electric car, choices they wouldn’t have made before learning about the climate impacts of tar sands oil—thanks to TransCanada.

Susan and Bill Dunavan have moved around a lot, living in New York, California and Lesotho, where they spent time as missionaries. So when they landed in York, Nebraska, in 1979, they were looking forward to living in the countryside in a small, quiet place to raise their family. 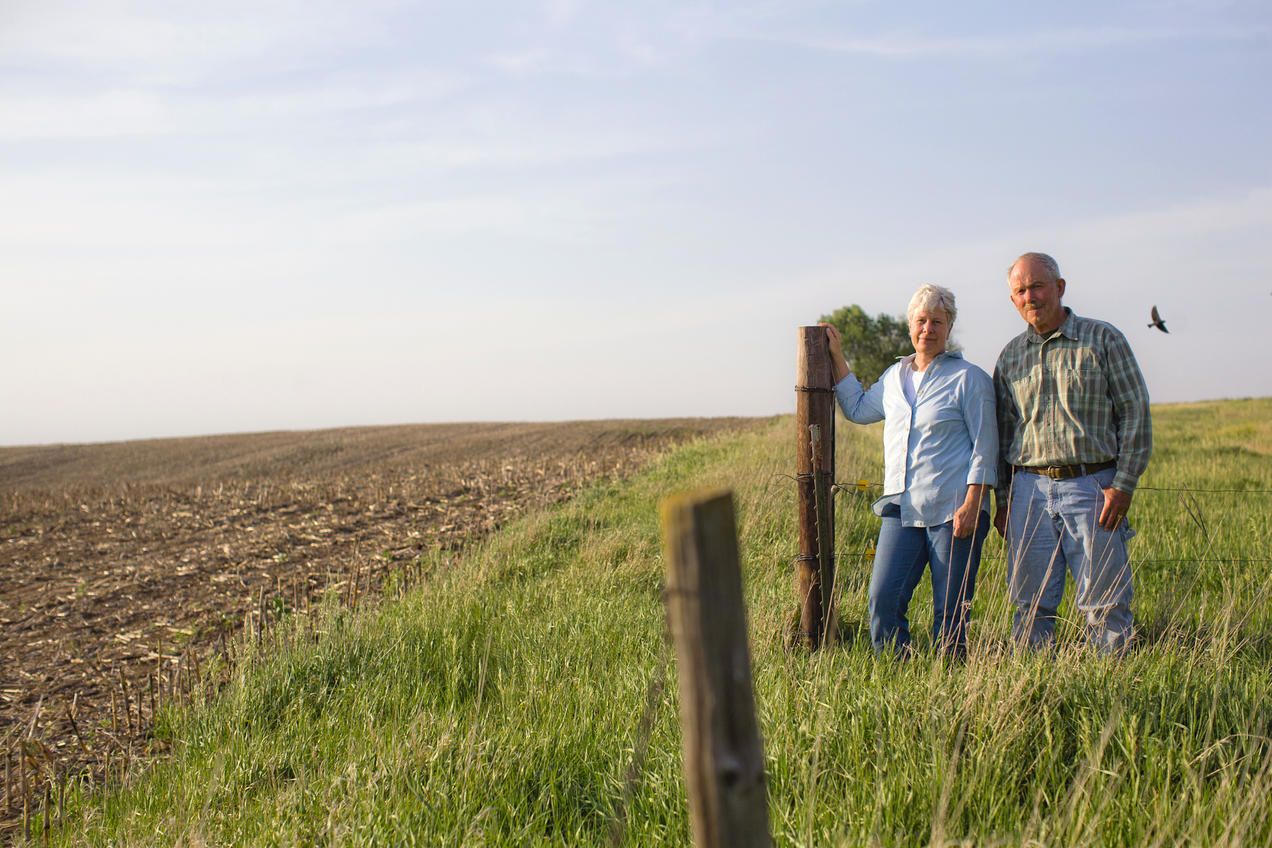 Things turned out quite differently.

“I didn’t realize what kind of trauma we would end up experiencing,” Susan said, referring to the nine-year battle they’ve fought with TransCanada. The Dunavans live on 80 acres of native pastureland, land they’ve been working on restoring to its natural state for decades—and land through which TransCanada wants to run its KXL pipeline. The Dunavans received their first letter from the oil company in May 2008, and soon after, land agents began stopping by to negotiate easements. All told, they’ve received seven offers—of just about enough money to buy a used car—and countless letters threatening eminent domain.

“TransCanada didn’t treat us very well,” Susan said. “I couldn’t understand why they were threatening us with eminent domain when they had no authority.” (It wasn’t until 2015 that TransCanada filed paperwork to exercise this power over the unwilling landowners, a move later nullified with President Obama’s pipeline veto.)

Susan talks about the “dirty tricks” TransCanada has employed to get people to sign their land over. She wonders why her state’s legislators won’t stand up for the citizens they represent and why they’d put the profits of a foreign company above the health and safety of Nebraskans. And if you resist? “They demonize you. They turn you into a radical protester,” she said. “What is so radical about wanting to give clean water to our children?”

A devout Catholic, Susan draws strength from her faith as she fights against Keystone XL. “The integrity of creation is being sacrificed for economic gain,” she said, invoking the words of an Alberta-based bishop. “The scale and the pace of the development of oil sands cannot be morally justified. It’s just wrong.”

For Tom Genung, community is at the heart of the fight against Keystone XL. A member of the Cowboy Indian Alliance—a group of ranchers, farmers and members of tribal communities who have coalesced around their opposition to the pipeline—Tom is quick to honor “the spirits of the indigenous people that lived on these grounds way before we did.” He talks often of the “unlikely alliances”—farmers and Native Americans, Republicans and Democrats—that the battle against KXL has created. 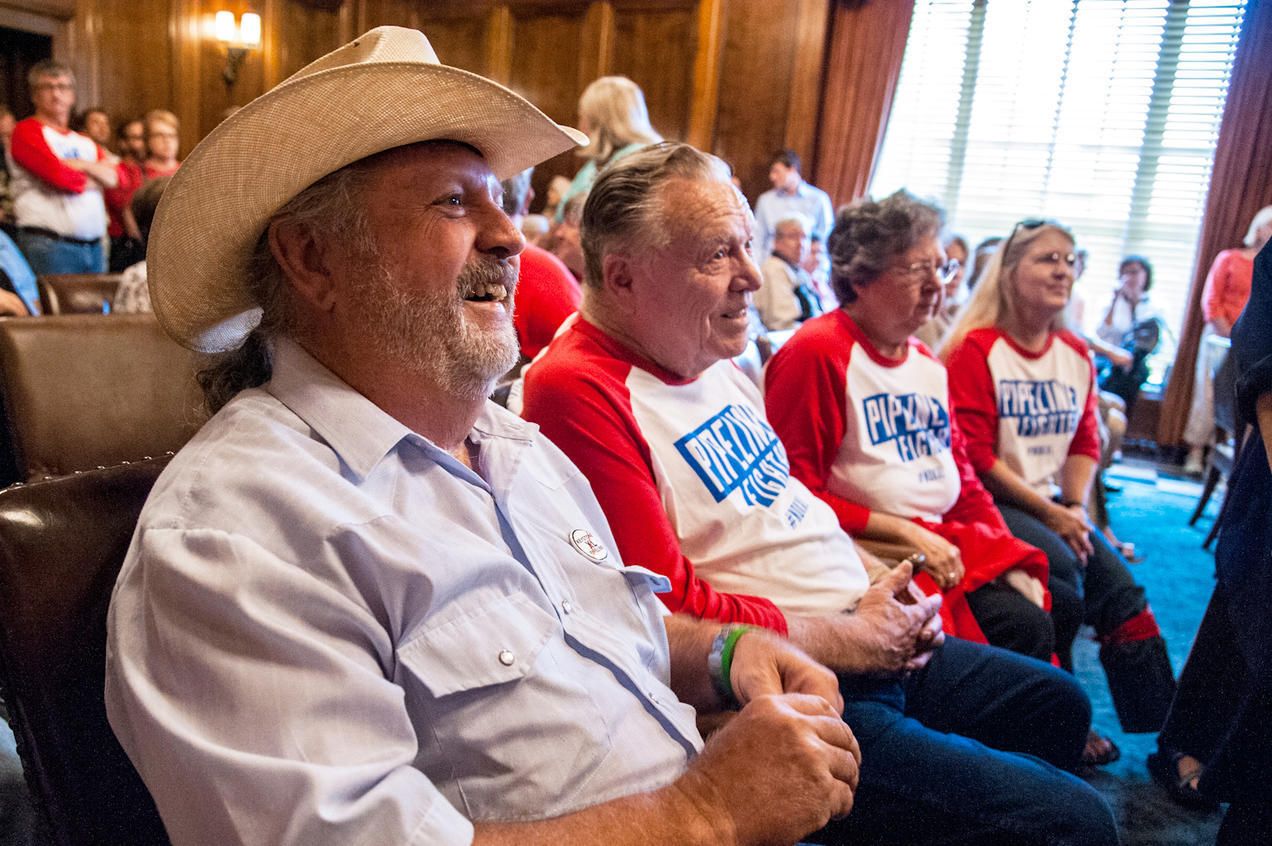 It wasn’t until TransCanada came knocking at Tom’s door that he and his wife, Cathie, realized their land in Atkinson was at risk. “We’d never been activists in any sense of the word,” Tom said. “Sure, we took interest in things and did our voting and hoped for the best. But when this came along, it got our attention and it became a calling. The most powerful realization for him has been that “a lot of landowners don’t feel any different than native people do about honoring the earth—we have a mutual understanding that maybe we didn’t know we had prior to getting together.”

Going to meetings, distributing educational materials, testifying at hearings, joining protests and chairing the landowner collective Nebraska Easement Action Team has been a lot of hard work and, at times, emotionally draining. But Tom considers the experience a privilege, regardless of the outcome. And he remains optimistic that the local resistance he’s helped build will be able to stop Keystone XL once again. “I’m excited to kick TransCanada’s ass one more time,” he said. “We’re having more fun than they are, I’ll tell you that.”

Under the fluorescent lights of a conference room in York in early May, Larry Wright, Jr., chairman of the Ponca Tribe of Nebraska, delivered testimony against the Keystone XL pipeline to a panel of PSC members. The next day, near David City, he joined a 273-mile march through the state in commemoration of the Ponca’s forced removal 140 years earlier. The remembrance walk followed the Ponca Trail of Tears, the path the tribe was made to traverse from its homeland in Nebraska to a reservation in Oklahoma—a route Keystone XL would cross several times in the northern and central parts of the state. “The proposed pipeline is going through what we consider cultural and historic traditional lands,” said Wright. “Even though we don’t physically own those lands today, at one point in our history, that’s where our people were. Our people are buried there.” Some were willing to die to try and move back home from Oklahoma, Wright adds. “That should say what the land means to us.”

In August, the Ponca Tribe of Nebraska will serve as an official intervenor in the review process for KXL’s permit. Wright said the tribe is particularly sensitive to TransCanada’s forceful efforts to use eminent domain. “We know what it’s like to have a foreign entity come in and take our land without just compensation. We empathize with those property owners and we stand with them.”

As Wright retraced the steps of his ancestors, he reflected on the beauty of his home state and the potential dangers the pipeline would bring. “It’s hard to fathom that Nebraska is considering approving this permit, especially when you’re out here and you’re walking. Hopefully we’ll bring a bit of light to that issue.”

The Allpress homestead, 13 miles southwest of Naper on the South Dakota border, lies at the end of a long dirt road that’s unpassable in the rain or snow. Nancy and Bob run cattle and grow corn and alfalfa on these 900 acres, which are a Homestead Act acquisition and owned by Bob’s family since 1886. A century and a quarter later, the land entered TransCanada’s crosshairs as part of the Keystone XL pipeline route revised in 2012. Bob and Nancy Allpress on their land near Naper, Nebraska.J Grace Young/Bold Nebraska

“Our family was in consensus that we did not think it was a good thing for us or for Nebraska,” Nancy said. “We drew that conclusion way before we were notified of it coming through our land.”

The Allpresses are the only family in Keya Paha County that have not signed an easement agreement. Many landowners, without the resources or power to fight the oil company, felt resigned to comply with it, the Allpresses said. “A lot of landowners signed on early out of fear. There were people that signed because they didn’t have all the information. And the lure of some money for your land is hard for some people to pass up, especially in these rural communities.”

But Nancy also sees a steady resistance to the pipeline among people who are confident that fighting back can make a difference. Local history buoys them: in the 1990s, citizens successfully stopped a nuclear waste dump from making its home in nearby Boyd County.

She, too, remains cautiously optimistic. “You can’t come into Nebraska and threaten people with eminent domain. It just doesn’t go over. Nebraskans are strong pioneer stock, very proud people and great stewards of the land.”