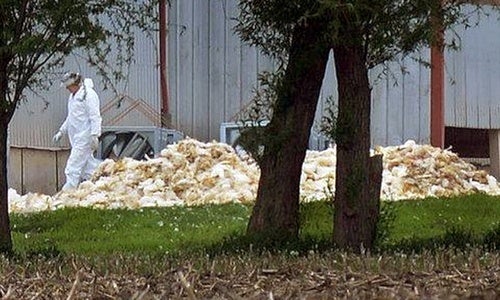 The devastating avian influenza sweeping the Midwest has forced the mass slaughter of nearly 40 million diseased chicken, turkey and wild birds in order to contain the outbreaks, according to the latest grisly numbers from the U.S. Department of Agriculture (USDA).

According to the USDA, since it was first detected in December 2014, there have been several ongoing highly pathogenic avian influenza cases along the Pacific, Central and Mississippi Flyways (or migratory bird paths). The strains in particular, H5N2 and H5N8, have been found in wild birds, as well as backyard and commercial poultry flocks.

This is the worst epidemic of bird flu in the nation’s history. Egg-producers in Iowa, the top egg-producing state, have been hit the hardest, with a shocking 40 percent Iowa’s egg-laying hens dead or to be euthanized.

In a report from Harvest Public Media (via NPR), while some local incinerators are burning dead birds 24 hours a day, other landfills have been turning away the carcasses for fear of contamination and neighbors’ complaints. Listen here:

“I’ve been in the landfill business probably 26 years, and I’ve never ever seen this kind of volume,” said Randy Oldenkamp, director of the Northwest Iowa Area Solid Waste Agency, in the report. “And I hope I never do again.”