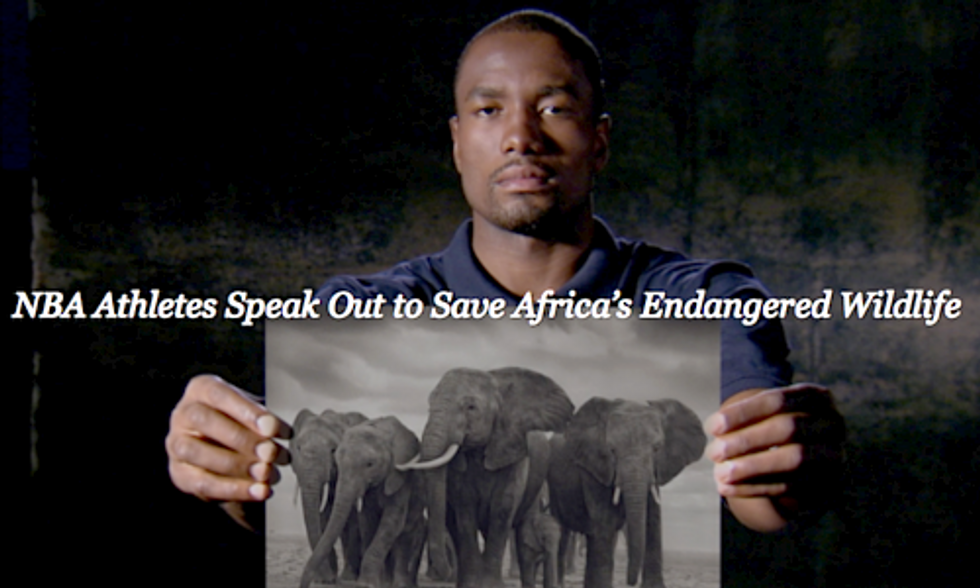 The message includes six NBA players: Pau Gasol of the Los Angeles Lakers, Tyson Chandler of the New York Knicks, Al Horford of the Atlanta Hawks, Serge Ibaka and Thabo Sefolosha of the Oklahoma City Thunder, and Joakim Noah of the Chicago Bulls. Throughout the service message the players hold iconic images of elephants and rhinos from photographer Nick Brandt.

“No Hype” is part of WildAid’s “when the buying stops, the killing can too” campaign led by former NBA star Yao Ming, Jackie Chan, The Duke of Cambridge, David Beckham and other international icons—attributed with drastically reducing shark fin soup consumption in China.

“I don’t think that people realize the harm and the damage that is done to these great animals," said Horford in a behind-the-scenes interview. “We need to put an end to this. The only way to do it is by getting people to stop buying these products.”

The launch of “No Hype” coincides with worsening news from Africa. An estimated 30,000 elephants are killed annually. There is also a staggering growth in the number of poached rhinos, currently outpacing all previous records with over 1,000 killed last year alone in South Africa compared to 668 in 2012 and 13 in 2007.

“You kill those animals and it’s like killing the world,” said Ibaka, a Congonese citizen, who regularly returns home to Africa.

"I saw carcasses of female elephants whose tusks were hacked out of their faces and left the orphaned babies traumatized," said Brandt co-founder of Big Life Foundation. “Please don't buy ivory and rhino horn, and boycott any retailer that sells it."

The message will air during TNT’s doubleheader tonight beginning at 7 p.m. EST when the Houston Rockets take on the Chicago Bulls and again when the Los Angeles Lakers play the Oklahoma City Thunder at 9:30 p.m. EST.

“The demand for endangered wildlife products is not just an issue in Asia,” said Peter Knights, WildAid executive director. “In the U.S., the second largest ivory market, Hawaii and New York legislatures are considering banning sales of products made from elephant tusk. We need to make ivory socially unacceptable rather than making it more legitimate, because when the buying stops, the killing can too.”

Below is a special behind-the-scenes look at the new NBA Cares public service announcement: