U.S. Navy-Trained Dolphins to Round Up Nearly Extinct Vaquita in Controversial Plan 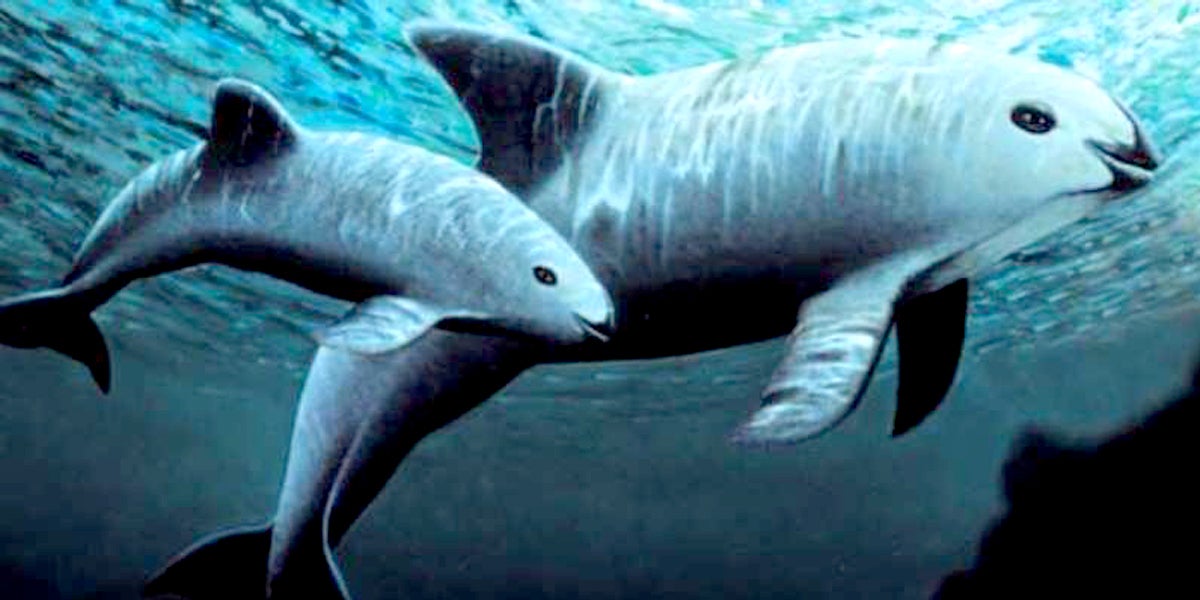 A controversial, last-ditch plan to round up the last remaining vaquitas—a critically endangered porpoise found only in the Sea of Cortez—may get underway this spring with the aid of U.S. Navy-trained bottlenose dolphins. The vaquitas would be placed in a protected enclosure while efforts are made to get illegal fishing in the area under control.

The population of these small porpoises has reached the point where they face imminent extinction. A report by marine conservationists issued in May 2016 estimated that less than 60 vaquitas remain. 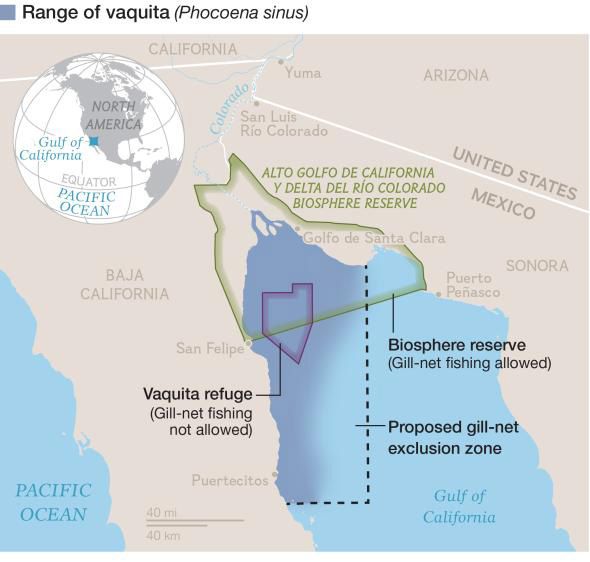 Vaquita refuge established in 2005 where gillnet fishing is prohibited.National Geographic

The Mexican government has been working with local fishermen to save the species. In 2005, Mexico established a refuge off San Felipe in the Gulf of California. Gillnet fishing was banned in the refuge. The government is spending $74 million to compensate fishermen and encourage them to use safer fishing methods.

For a time, it worked. Although the population continued to decline, it did so at a slower rate. Scientists hoped it would soon turn around and begin to recover.

But they didn’t count on China.

The country’s newly-minted millionaires stimulated a demand for dried fish bladders. Called fish maw, they are alleged to possess medicinal properties including the ability to increase fertility. The source of those fish bladders: the Mexican totoaba, a critically endangered fish found in the same waters as the vaquita.

Totoaba bladders are worth up to $5,000 per kilogram and can command as much as $100,000 on the black market in China, according to a 2016 report by the Environmental Investigation Agency. They can be found at retailers in major Chinese cities as well as online sites such as Alibaba. Poachers often take their boats out at night, and use gillnets under the cover of darkness to round up as many totoaba as they can. The vaquita are merely bycatch, caught up in the nets where they often drown or die from stress. 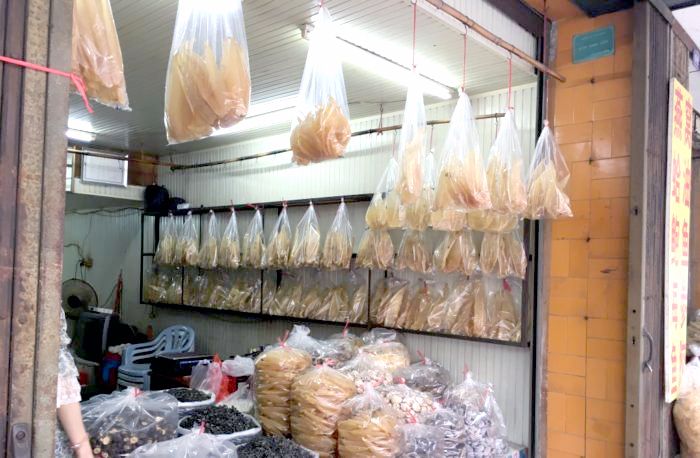 Details of the plan to save the vaquita are still being worked out.

Plans may involve using dolphins from the Navy Marine Mammal Program, which has studied, trained and deployed these highly intelligent animals since the 1950s. Dolphins would be used to help locate vaquitas. They would then be coaxed into lightweight surface gillnets. It’s never been done before with vaquitas, but harbor porpoises in Greenland have been captured safely in a similar manner.

However, vaquitas have never been held in captivity. They are shy creatures, and will swim away if a boat approaches.

“The attempt to capture them and handle them will be really challenging because they are sensitive to stress,” said Dr. Frances Gulland, senior scientist at the Marine Mammal Center in Sausalito, California.

Conservationists differ on their support for the proposal, which is known as ex situ conservation.

“We have no idea how vaquitas will respond,” said Sarah Uhlemann, international program director for the Center for Biological Diversity, which supports the plan. “But we’re in a very desperate situation with vaquitas. We are literally on the precipice of losing the species.”

Others see this as too risky.

“I don’t like this idea at all,” said Omar Vidal, director general of the World Wildlife Fund (WWF) in Mexico. “The risk of killing a vaquita while catching them is very high. With only 50 or 60 animals left, we can’t play with that.”

Sea Shepherd has two boats patrolling the Gulf of California and works closely with the Mexican Navy, which has the authority to arrest those found using banned nets or with contraband fish.

“The vaquita belongs in its natural habitat and both the species and the habitat need to be protected,” Captain Paul Watson, founder of the Sea Shepherd Conservation Society, told EcoWatch. “Removal of the vaquita could stress and kill the animals captured and removal will allow the poachers to intensify their exploitation of the endangered totoaba fish.”

But Gulland points out that this will be a careful process. “It will be a very stepwise process with external review at each point,” she explained. “We’ll catch one, and if it works, we’ll catch two, see how they survive.” During the capture and containment process, veterinarians would monitor the porpoises and release stressed individuals.

Housing the animals in a protected enclosure will not be a long-term solution, and is not, as some have reported, a captive breeding program. As Uhlemann explained, “It’s just to protect them until Mexico can get enforcement under control in their natural habitat.”

Mexico has undertaken a large effort to remove derelict gillnets that have sunk into the sea.

“While the cleanup of the wreckage occurs, some of the animals will be protected so they can be released back into the environment once the gillnets are gone,” said Gulland.

Uhlemann believes that Mexico could do a better job of enforcing the ban against gillnet fishing, as well as upholding its obligation to prevent trade in endangered species. The Center for Biological Diversity has petitioned the Obama Administration twice to hold Mexico accountable and today the Center for Biological Diversity threatened to sue the U.S. government for failing to sanction Mexico over its role in the alarming decline of vaquita. The lawsuit would seek a certification from the U.S. that Mexico’s illegal totoaba fishing and trade violates the 1973 Convention on International Trade in Endangered Species (CITES).

“The United States has the legal authority and the moral duty to take aggressive action against Mexico, including instituting an economically painful shrimp embargo,” Uhlemann said. “The vaquita’s very existence depends on immediate and dramatic action by both nations.”

Uhlemann said they would press the incoming Trump Administration to hold Mexico accountable.

Recovery of the species from such a small population won’t be easy. Vaquitas reach sexual maturity between three and five years of age, and females give birth only every two years.

“Recovery will be many years down the line,” said Gulland. The Marine Mammal Center will lend its veterinary expertise on rescue, rehabilitation and care for the vaquitas.

Most agree that the solution to saving the vaquita is for Mexico to permanently ban gillnet fishing throughout the animal’s range and to stop the illegal trade of totoaba bladders.

“We believe the answer is enforcement of the laws against the poachers and a 100 percent ban on fishing activity in the Gulf of California with compensation for the fishermen to leave their boats and their nets on land,” said Captain Watson. “The habitat needs the vaquita and the vaquita needs it’s habitat.”