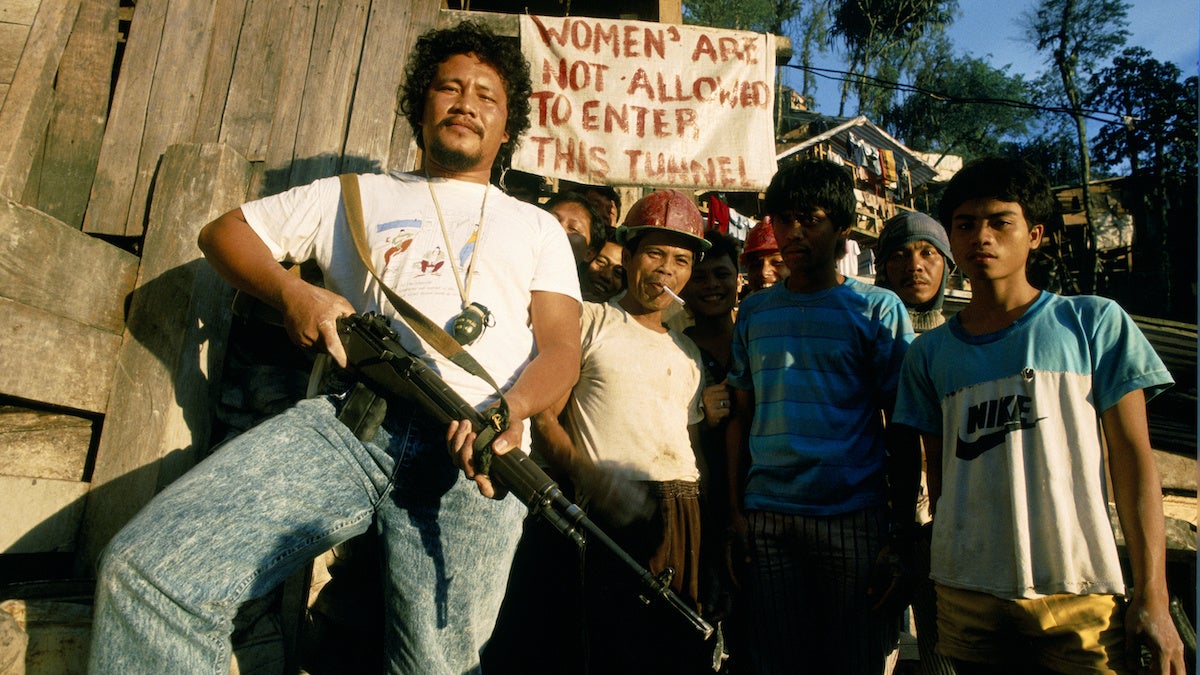 The Diwalwal Gold Mine in Mindanao, Philippines on Feb. 1, 1988. Destruction of the environment by extractive industries is linked to significant threats to women's safety, a new study has found. Patrick AVENTURIER / Gamma-Rapho via Getty Images

Climate action leaders have warned for years that marginalized frontline communities in poor countries are already facing the most destructive impacts of the climate crisis, and a new study confirms those fears, detailing how women in those regions are at greater risk for violence and abuse as the environment is degraded.

The International Union for the Conservation of Nature (IUCN) released its study on Wednesday after conducting more than 80 case studies and speaking to more than 300 sources over the course of a two-year project.

“This study adds to the urgency of halting environmental degradation alongside action to stop gender-based violence in all its forms, and demonstrates that the two issues often need to be addressed together,” said Dr. Grethel Aguilar, IUCN’s acting director-general.

The study is the largest and most comprehensive to ever examine the gender-specific effects of the climate crisis, IUCN says.

Of the more than 300 responses IUCN compiled from international organizations working in developing countries, six in 10 respondents said they had observed gender-based violence directed at female environmental defenders, climate refugees and migrants, and an increase in such violence in areas where the climate crisis and global heating has put a strain on resources.

“As environmental degradation and stress on ecosystems increases, that in turn creates scarcity and stress for people, and the evidence shows that, where environmental pressures increase, gender-based violence increases,” said Cate Owren, lead author of the report.

The publication was praised by women’s rights advocates on social media.

“The fight against the climate crisis will have far more of an impact if represented by those most affected,” tweeted the British Women’s Equality Party.

One more illustration of the need to consider impact on #gender upfront in any policy.

The correlation between increasing #environmental stresses and #genderviolence highlights the imminent need to elect gender equal administrations. The fight against the #climatecrisis will have far more of an impact if represented by those most affected.https://t.co/bo3At6DTj8

The study found that both human trafficking and forced child marriage are becoming increasingly common in places where chronic drought, flooding and heatwaves have caused crop yields to suffer and brought on a scarcity of resources.

“When families struggle to meet basic needs, marrying off young daughters is seen as a way to lighten financial burdens,” the report reads. “There is growing concern around reports of an increase in child marriage associated with conflict and natural disasters and environmental shocks.”

According to The Guardian, about 12 million more young girls are believed to have been married off after extreme weather events increased, while human trafficking increases by 20 to 30% after weather disasters.

“In most parts of the world, women are already disadvantaged and lack land rights and legal rights, so are vulnerable to exploitation,” wrote Fiona Harvey in The Guardian. “When the additional stresses caused by the climate crises bite, they are the first to be targeted.”

The destruction of the environment by extractive industries has significant effects on women’s safety, as an influx of male miners, construction workers and security guards is linked to an increase in gender-based and sexual violence, often with Indigenous women as targets.

“Mining areas, many of which are in Indigenous territories, have seen heavy military presence, resulting in various human rights violations, such as torture, psychological disturbance, destruction and divestment of properties (livestock and crops), as well as violence against women, including rape,” reads the study in a section about the Mindanao region of the Philippines.

Sexual violence is also used to suppress women who attempt to defend their homes and environments from extractive industries, and to intimidate others who may come forward in protest.

“Environmental crimes degrade ecosystems, and also often bring new, worsening patterns of violence against women, minorities, and marginalized communities,” said Jenny Springer, director of IUCN’s global program on governance and rights. “Many Indigenous women in particular face gender-based and other violence as their communities act to defend their territories, resources and rights from such illegal activities.”

Since women in many parts of the world are responsible for gathering water and provisions for their families, they are often at an increasingly greater risk for gender-based violence as they have to travel farther from home, as resources shrink.

IUCN surveyed the Danish Refugee Council, which conducted a study at Doro Refugee Camp in South Sudan regarding dangers faced by residents there. Women in the study identified collecting firewood outside the camp as the biggest risk they regularly took.

“Food insecurity and the lack of firewood forces women and girls to go outside of the camps to collect firewood despite the risks of suffering violence by militias, private forest owners, rangers or other unknown perpetrators,” the report reads. “Many … survey respondents also raised these concerns as one of the major threats in refugee camps as related to emergency responses and protracted crises.”

IUCN’s study was released a day after CARE International published its report “Suffering in Silence,” showing how the climate crisis has exacerbated conflicts and economic and political instability across Africa, making the continent home to nine of the 10 most-overlooked humanitarian crises in the world.

“Environmental degradation now affects our lives in ways that are becoming impossible to ignore, from food to jobs to security,” said Aguilar. “This study shows that the damage humanity is inflicting on nature is also fueling violence against women around the world — a link that has so far been largely overlooked.”