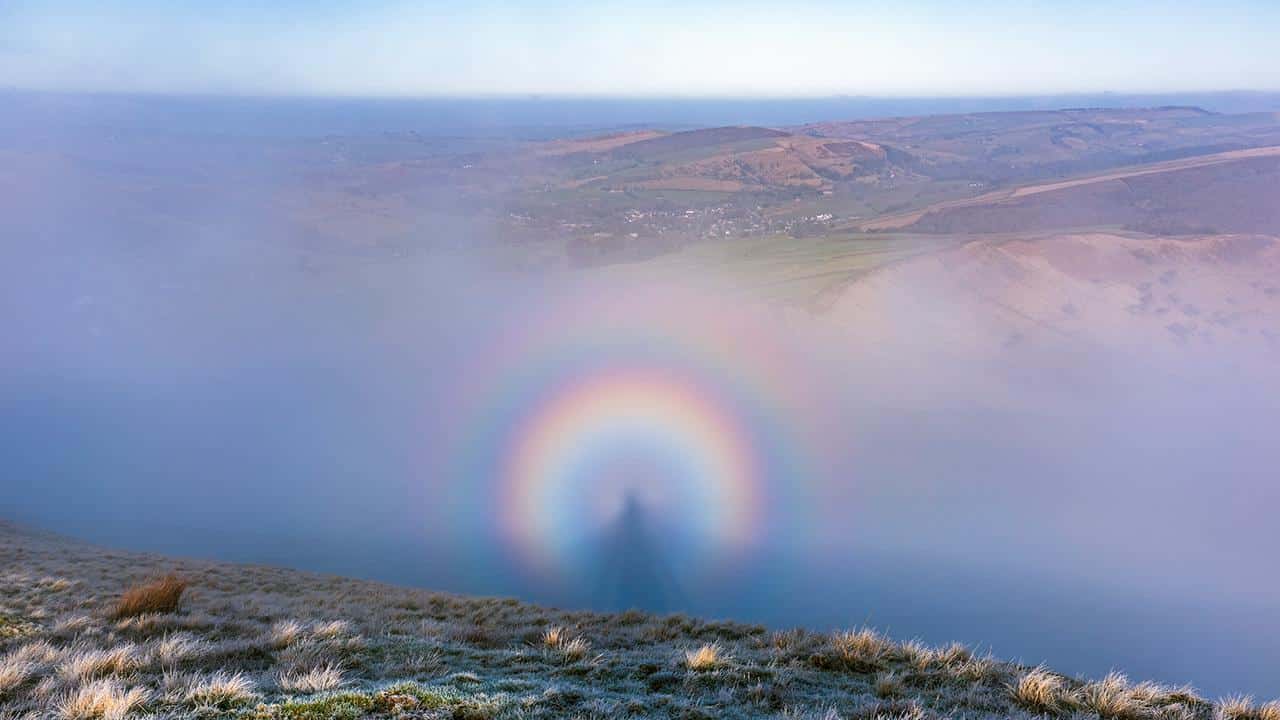 A Brocken spectre above the village of Hayfield in the Derbyshire Peak District. John Finney Photography / Getty Images

We’re all familiar with rainbows, tornados, and shooting stars. Maybe you’ve been lucky enough to see Aurora Borealis, or even bioluminescent waves rolling in from the ocean. Our planet exhibits such awe-inspiring natural phenomena wherever we look: at its highest peaks, deepest ice formations, or right in our own backyards.

Here are a few amazing environmental spectacles that you probably haven’t heard of.

In German folklore, a man walked in the misty mountains, the sun behind him and clouds of fog below, looking down on the haze, he saw a giant, shadowy figure, ringed by a rainbow halo that inspired such terror that he jumped off the mountain to his death.

The Brocken spectre – also called the Brocken bow, mountain spectre, or a mountain glory – luckily presents no real danger to unsuspecting hikers, but has inspired awe in outdoor enthusiasts and artists alike; Carl Jung, C.S. Lewis, and Charles Dickens have all written about this mountain phenomenon. Named after Brocken, the highest peak of the Harz Mountains in Northern Germany where it was first documented, the Brocken spectre appears when the sun is low behind someone – often mountain climbers – who have climbed high enough to look down upon the clouds or mist. The low sun projects their human shadow onto the fog, encircled by a rainbow ring created from the refraction of light within the water droplets.

The spectre is so breathtaking in part due to the seemingly massive size of the human shadow: an illusion borne of the distance it lies from the person, and the way it falls on water droplets of various depths. All reference points are also obscured by the mist, which makes it hard to judge the proportions and size of the shadow.

Airline passengers might also see the Brocken spectre from their windows: the shadow of the plane projected onto the clouds and encircled by a rainbow halo.

A longer exposure of this eruption was created by combining 3 sequential short exposures taken one after the other. The result is as if a longer exposure had been done, resulting in a spectacular eruption photo emphasizing the glowing lava and volcanic lightning. Mike Lyvers / Getty Images

Flowing lava and billowing ash are expected traits of volcanoes, but what about lightning?

These bolts of electricity occur during the early stages of explosive volcanic eruptions where ash, gases, rock, and lava are expelled very quickly. When lava – molten rock developed in the Earth’s mantle or crust – erupts on the surface, ash and soot often join, creating the fodder for volcanic lightning displays.

Lightning is formed in two different places within the volcano: in the clouds of ash close to the ground, and in the high plumes of smoke. Ground-level lightning occurs when the billions of particles of ash and smoke rub together, creating enough friction to transform electrons in the atmosphere into static electricity. The higher, stratospheric lightning is generated similarly to regular lightning; as ash and water vapor rise in plumes out of the volcano, ice begins to form. Like typical lightning, where waves of warm and cold air produce electric charges, so do the collision of ice crystals in these ash plumes.

Mt. Vusuvius’ famous eruption 2,000 years ago is the first recorded instance of volcanic lightning, and was seen when the volcano erupted again in 1944. Some of the best observations of volcanic lightning by scientists occurred in 1980 when Washington State’s Mount St. Helen erupted continuously over several months. It’s also been viewed at Eyjafjallajökull in Iceland, Sakurajima in Japan, Mount Augustine in Alaska, Taal in the Phillipines, and many other volcanoes around the globe.

You don’t need to visit a volcano or climb a mountain to witness breathtaking natural phenomena. Sun halos are a common sight, and can be viewed from your own backyard.

These ghostly white or pale rainbow halos around the sun are created by the interaction of light and ice crystals in the atmosphere. When light from the sun or moon passes through the hexagonal ice crystals in cirrus or cirrostratus clouds, they act as a prism, breaking visible light into its individual component colors. This refraction makes the colors visible to the human eye.

No two halos are alike. A neighbor looking at the same halo from a different vantage point – therefore seeing the crystals from a different angle – might observe entirely different colors. But, no matter how beautiful the halo, make sure not to look at the sun directly.

Cirrus clouds are very high – typically 20,000 feet or more – and usually come before a storm, so sun halos are often a sign that bad weather is approaching, such as rain or snow.

Imagine letting thick, viscous slime drip slowly through a screen, and you’ll have a decent picture of what mammatus clouds look like in the sky.

These bulging, pouch-like protrusions reach downwards from the underside of clouds, and can extend for hundreds of miles. The word “mammatus” comes from the Latin mamma, meaning “breast” or “udder,” which the clouds certainly resemble.

Unlike normal clouds, mammatus are formed by sinking air rather than rising, and are made primarily of ice. They usually form alongside cumulonimbus clouds, with their unstable masses of air. Turbulence within cumulonimbus creates the bulges on the underside of the anvil – the flattened part of cloud – as it descends.

Mammatus are generally associated with bad weather, like hail, rain, or snow; they’re more rarely seen on clouds other than cumulonimbus that produce no rain, or on clouds of volcanic ash.

Large desert rose stone formation and rose flowers in the flower bed next to the road in the Tunisian desert. Anna Chaplygina / iStock / Getty Images Plus

Flowers can grow in the desert, but they’re not always plants; some are made of sand.

Desert roses form over tens of thousands of years (which is very short in the geological world), resulting in an aggregate of disc-shaped gypsum or baryte crystals that include sand grains. The crystals are flat and fan out like petals, giving them a flower-like appearance.

The environmental conditions must be just right for desert roses to grow. Gypsum is an “evaporite,” meaning it forms during the evaporation of water; inflowing water containing calcium sulfate is balanced with the water flowing out by evaporation, leaving these floral formations behind. The “petals” even take on a rusty color if iron oxides are present.

The roses are usually only a few inches wide, but can grow to be three feet tall and over 1,000 pounds. They’re found in desert areas around the world, including many countries in and around Northern Africa, Germany, Spain, Australia, and Mexico, among others. In the U.S., they can be found in Arizona, Texas, and Oklahoma.

In 2014, the first of about 20 confirmed gas emission craters was discovered accidentally by a helicopter flying overhead. The craters are the result of huge gas explosions in the permafrost – a layer of perpetually-frozen ground – in West Siberia, concentrated on the Yamal and Gydan Peninsulas. One such crater is 100 feet deep.

The Arctic is warming faster than any other region on Earth, and scientists have long warned about the effects of climate change on permafrost. Temperatures in the region were nearly 11ºF higher than usual in 2020, and many of these craters were found after such unusually warm summers, suggesting that heat could have led (at least partially) to the explosions

As temperatures rise, permafrost in Arctic regions melts, deforming the Earth’s surface and releasing methane and other greenhouse gases – created from the decomposition of organic matter once frozen in the ice – into the atmosphere. These methane gases also build up beneath the ground, creating pressure and forming hills in the 3-5 years before the explosion. The permafrost’s “caps” become weaker as they thaw, and eventually reach a tipping point when the gas breaks through.

These explosions are expected to continue as permafrost keeps thawing. Geologists are studying the phenomenon and creating models to predict explosions, especially those that might occur near critical infrastructure and populated areas; one has already occurred close to a major pipeline, and another near the Obskaya-Bovanenkovo railway.