Natural Gas Rig Fire in the Gulf, Another Wakeup Call 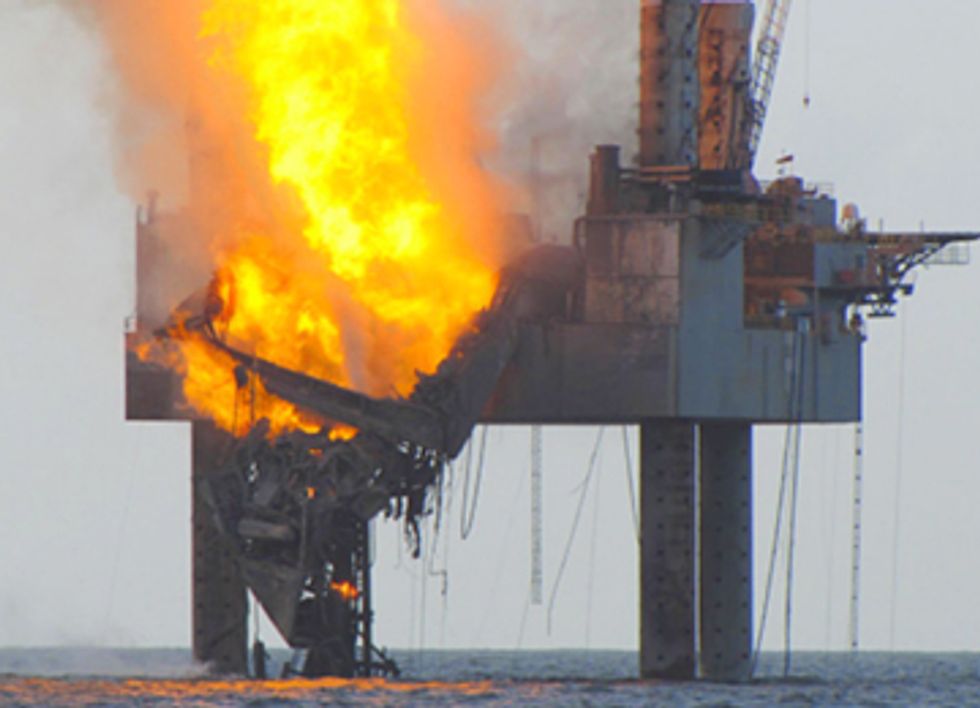 Late last night, a natural gas drilling rig known as Hercules 265 exploded. The rig has now partially collapsed and is burning out of control, too dangerous for firefighters to approach.

This incident begs the question: if the safety recommendations of the National Commission on the BP Deepwater Horizon Oil Spill had been implemented swiftly, would this accident have occurred at all?

It is particularly notable that the blowout preventer appears not to have worked in this instance, just as is it didn’t on the Deepwater Horizon. Whatever the facts of this case turn out to be, accidents like this one are part of a long industry pattern that places profit ahead of communities, local economies and the environment.

There are still many unknowns. For example, we don’t know how much gas is being released or if the well is releasing gas below the surface as well as above.

On Wings of Truth flew over the runaway well yesterday, before the fire, and made this video available:

While natural gas is less toxic than crude oil, when released from a well it can contain smaller quantities of volatile petroleum condensates, like kerosene and gasoline. And natural gas alone can have significant impacts on marine species, particularly when the water is warm. Dr. Irene Novaczek writes:

The gas can rapidly penetrate the bodies of fish, doing direct damage to gills, skin, chemoreceptors and eyes, and filling up the gas bladder, making the fish unable to control its buoyancy. … Shellfish are also killed by exposure to gas. Zooplankton and phytoplankton can tolerate higher concentrations of gas than fish or shellfish can (i.e. they die at two–five mg/l).

If all the hydrocarbons are being released above the surface of the Gulf, then the immediate impacts to marine wildlife would be lessened, as the Associated Press reports:

"Gas being discharged now would not necessarily affect the water system of the Gulf proper,” said Donald Boesch, president of the University of Maryland’s Center for Environmental Science and a member of the federal panel that investigated the BP oil spill. That’s because it’s likely most of the gas is venting directly into the atmosphere given the fire and shallow depth of the well, he said.

Houston-based Walter Oil & Gas Corp is now looking to drill a relief well to stop the flow of gas, an operation that could take days or even weeks. Thankfully, all 44 workers on board the rig were evacuated safely and there does not appear to be any real potential for a disaster on the scale of the Deepwater Horizon.

Whatever ultimately happens with the Hercules 256, it’s clear that it is long past time for Congress and the Obama Administration to reform oil and gas leasing practices and permitting requirements to better safeguard wildlife and the environment.

This not the first wake-up call we have had in the Gulf. Let’s hope our nation’s leaders don’t hit the snooze button this time—as they have so many times in the past.