Why Natural Gas Is Not a Bridge Fuel 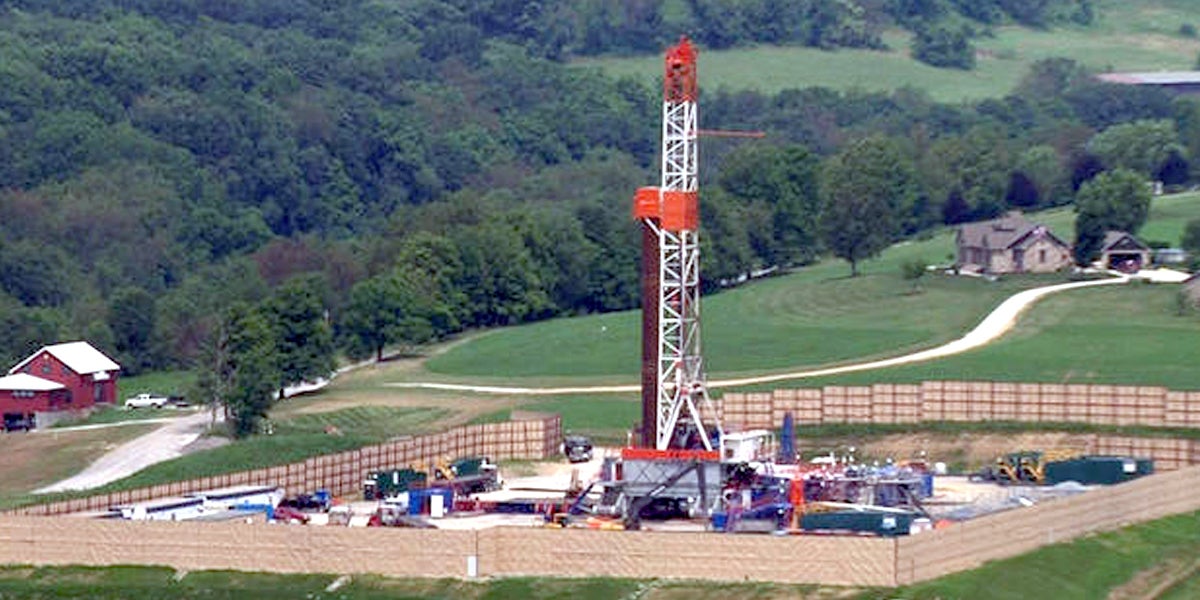 For the past century, coal has been king, providing the majority of U.S. energy for electricity generation.

But a combination of new federal and state environmental policies and a glut of cheap natural gas (mostly from hydraulic fracturing or fracking) have led to a dramatic shift during the past decade, with coal dropping from 50 percent to 32 percent of our electricity generation and gas increasing from 18 percent to 33 percent. 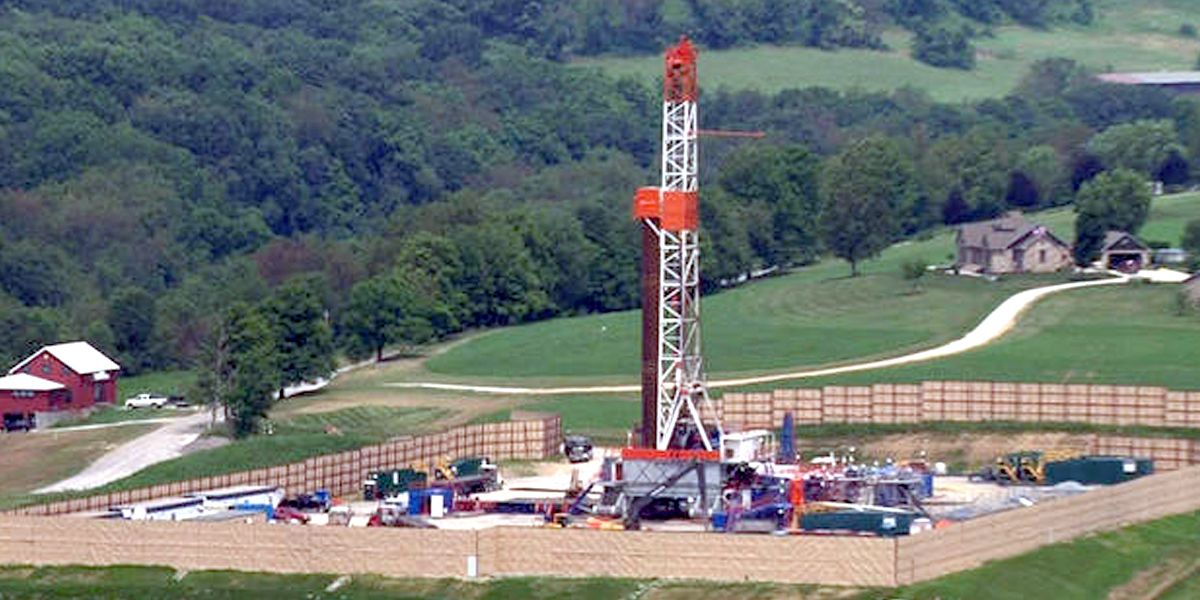 Just under a third of existing coal-based power generation in the U.S. has been shut down and the Obama administration has aggressively embraced the replacement of coal with gas as a key part of meeting its 2030 climate targets. We are quickly traveling down a gas bridge away from coal. But will this shift actually be a good thing for the climate?

Slashing Emissions at the Plant

At first glance, replacing coal with natural gas seems like a good (though not great) step in combating climate change.

Overall, carbon dioxide emissions from new gas power plants are as much as 66 percent lower than those of existing coal power plants. About half of this reduction is due to differing carbon intensities of the fuels (natural gas emits 40 percent less carbon than coal per unit of heat). The other half is due to the higher generation efficiency of natural gas (new natural gas plants convert heat to power at upwards of 50 percent efficiency, while typical coal plants only operate at about 33 percent efficiency).

A way to reduce emissions by as much as two thirds while also saving money seems like a no-brainer for climate policy. But natural gas has an Achilles’ heel that makes the question much harder to answer. 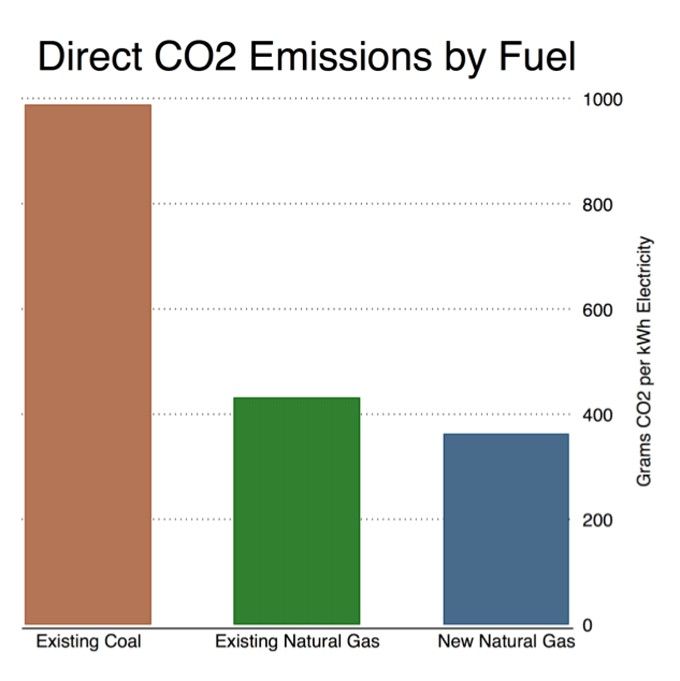 Direct CO2 emissions from electricity generation in grams per kWh. Based on calculations from Hausfather 2015.

Natural gas is predominately composed of methane. When methane is burned to produce electricity or heat, it releases carbon dioxide and water vapor.

But not all natural gas produced is burned. Some of it is leaked at gas wells, in compressor stations, from pipelines or in storage. Methane is a powerful but short-lived greenhouse gas. While it is in the atmosphere, it is around 120 times more powerful than carbon dioxide per ton, but it quickly decomposes through chemical reactions and only about 20 percent of the methane emitted today will remain after 20 years.

Carbon dioxide, on the other hand, has a much longer atmospheric lifetime. About half of the carbon dioxide emitted today will be around in 100 years (and virtually none of the methane will be) and about 15 percent of today’s carbon dioxide will still be in the atmosphere in 10,000 years.

This difference in longevity makes a comparison between the two tricky. Essentially, how much methane emissions today matter for the climate depends largely on the timeframe you are considering. If you care about avoiding warming later in the century (as the United Nations does with its 2C warming by 2100 target), there is relatively little problem with short-term methane emissions, as long as they are phased out in the next few decades. If you care about short-term changes, however, methane is a much bigger deal.

How much methane leaks from the natural gas system is very much an open question. For a long time official U.S. Environmental Protection Agency (EPA) numbers suggested the emissions were small and falling fast, only amounting to around 1.5 percent of total production.

Adam Brandt at Stanford University published a high-profile paper in the journal Science in 2014 summarizing all the research to date. He found that overall emissions were likely between 25 and 75 percent higher than reported by EPA, suggesting that actual natural gas leakage rates are probably somewhere between 2 and 4 percent of gas production. (Some researchers have found leakage as high as 10 percent for individual fields, but there isn’t evidence that those findings are characteristic of the sector as a whole).

How Much Do Leaks Matter?

What do these leakage rates mean for the viability of natural gas as a bridge fuel? Again, it comes down to a question of time frame.

Let’s look at a simple example of a big coal power plant. One option is to leave it alone for the next 30 years, at which point it will be replaced by renewable energy.

Another option is to replace it with gas today and replace that gas with renewables in 30 years. 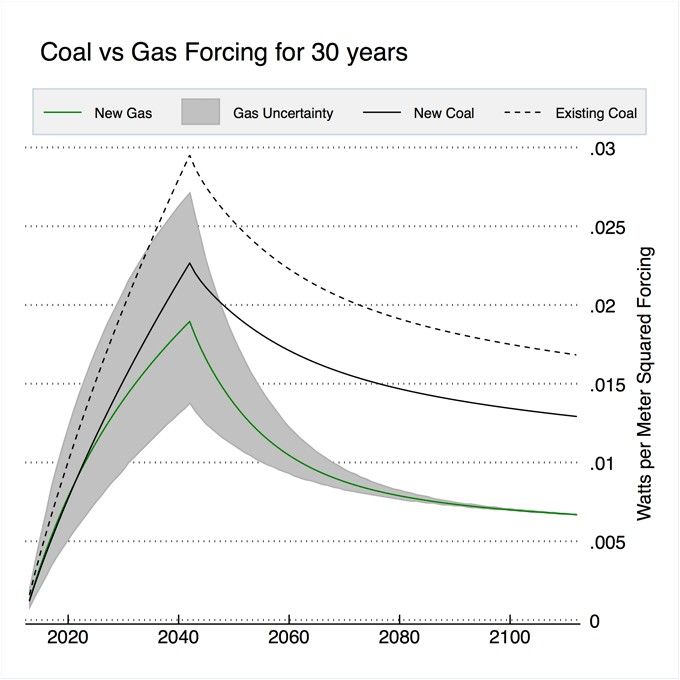 Adapted from Figure 3 of Hausfather 2015.

But no matter what the leakage rate is, gas will still cut the climate impact by 50 percent in 2100 compared to new coal and 66 percent compared to existing coal. So whether switching from coal to gas is beneficial in this simple example depends on how you value near-term or longer-term warming.

The importance of near-term warming is tough to assess. Climate models, by and large, don’t predict any irreversible changes in periods as short as 30 years and potential tipping points in the climate generally depend more on the peak warming that occurs (which in nearly all foreseeable cases would occur after 2050).

But there is much about the Earth’s climate that is still unknown and scientists can’t categorically rule out the potential for shorter-term warming to cause unforeseen impacts.

With longer-term warming, the impacts are much more clear (and generally more dire). By the end of the century, we’d expect around 4C warming in a world where we didn’t take any action to slow emissions. As the damages of climate change tend to increase exponentially with rising temperatures, many economists argue that the biggest impacts of climate change will occur later in the century and that the main focus should be on reducing longer-term warming.

What About Choosing Neither Coal Nor Natural Gas?

There is yet another wrinkle in the comparison of gas and coal. If they were the only two ways we could generate electricity, the analysis would be fairly straightforward.

But there are many zero or near-zero carbon energy sources that are preferable to both coal and gas, including wind, solar and nuclear power. In a perfect world, we would skip the gas bridge entirely and immediately replace all the coal plants with renewables.

The challenge is that although renewables are increasingly cost competitive with coal in some parts of the country, on average, they are still more expensive. Renewables are also often intermittent, producing less power when the sun doesn’t shine or the wind doesn’t blow and incurring additional expenses for energy storage technologies to help balance out the grid, at least once renewables reach a high enough percent of generation.

On the other hand, renewables are getting cheaper and although it might not be practical to replace all coal plants with renewables immediately, it’s definitely possible to do so in the next decade if renewables continue to fall in price. If we replace coal with gas today, we’ve sunk costs into new gas infrastructure that we might be loath to replace a few years later with renewables. In this way, a gas bridge could delay the widespread adoption of renewables.

It comes down to this: If we think that coal plants would stick around for 15 years or more in the absence of gas, its probably better to replace them with gas today. If we think we will have the political will to retire gas plants early, we could also potentially benefit from a gas bridge.

But if we end up locking in gas infrastructure that sticks around and delays renewables, we might be better off eschewing a gas bridge even if it means sticking around with coal a bit longer.

It’s a tough problem with no simple answers, but the one thing we know for sure is that if natural gas is to serve as a bridge away from coal, it had better be a short one.