Why Mauna Kea Needs Your Protection 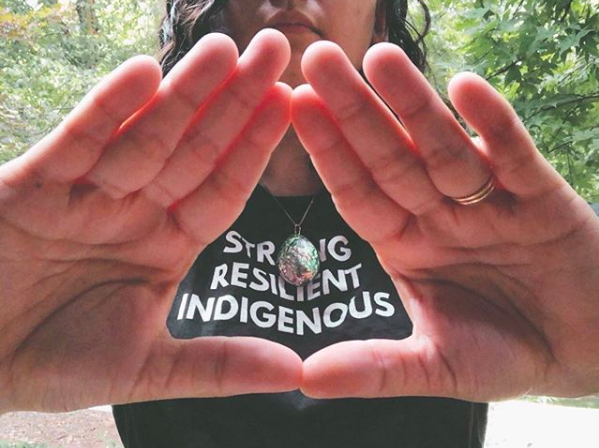 Holding up the sign of the Mauna. Kaitlin Grable

I was born on the island of O’ahu, 98 years after the U.S. supported an illegal coup in my hometown of Honolulu to overthrow Queen Liliuokalani and steal Hawaiian land. I was born in a Hawai’i that is radically and tragically different from the Hawai’i of my ancestors.

The Hawaiian word for land is ‘aina. This word literally translates to “that which feeds us,” which is a beautiful way to describe the sacred kinship that not just Hawaiians, but we all have with the land. It nourishes, it feeds, it gives life and after life it is into the land we return.

But in Hawai’i the continued legacies of colonialism and imperialism are destroying our ‘aina.

Countless Hawaiian sacred sites have been bulldozed, dismantled, developed and even used for military target practice.

Many Kanaka (Indigenous Hawaiians) are passionately fighting to raise awareness about the injustices they face, such as racism and displacement, while seeking to gain back control of their land. And right now, the world is watching as Hawaiians, both Indigenous Kanaka and non-Indigenous Kama’aina, are taking a stand against scientific imperialism in the form of the Thirty Meter Telescope.

These protectors, the Ku Kia’i Mauna, have been steadfast in their presence, creating blockades with their own bodies to prevent road access for weeks now.

To the Kanaka Maoli, Mauna Kea is the most sacred place. It is the tallest mountain in Hawai’i, and the tallest mountain in the world when measured from its bottom on the seafloor of the Pacific all the way to its peak. It is the birthplace of Hawaiian cosmology and the center of the Hawaiian universe, the meeting place of Earth Mother Papahānaumoku and Sky Father Wākea. Historically, only Hawaiian chiefs and religious leaders were permitted to ascend to the Mauna peak.

But this is about so much more than the desecration of sacred lands. This is about dismantling the systems of colonialism and imperialism that have destroyed and exploited our precious natural resources, and continue to do so with no regard for people or planet.

Hulali Kau, a writer and advocate working in Native Hawaiian and environmental law, said it best:

“To anyone that continues to try to frame TMT as a science versus culture argument, I would say that this struggle over the future of Mauna Kea is actually about how we manage resources and align our laws and values of Hawaii to connect a past where the state has subjected its Indigenous people to continued mismanagement of it lands with its uncertain future.”

There are many people who ask, “Why now? There are 13 telescopes up there. Why not one more?”

Beyond the fact that this is sacred Indigenous land, let’s lay out the facts:

I moved away from my Hawaiian homelands at a young age, but the spirit of Aloha has only grown stronger in me. And though I now live on the opposite end of the country, I am standing firmly with my friends and family on the Mauna. This isn’t just their fight, this is all of ours. We must be united for this cause.

Sign the petition, tell the TMT Board of Directors: Keep Mauna Kea a sacred ground — move the construction of the TMT!

Mahalo nui loa for your solidarity.

Until the last aloha ‘aina.

Kaitlin Grable is the Social Media Associate for Greenpeace USA. She is currently based out of Durham, North Carolina on Eno and Occaneechi territory. You can peep her on Instagram @AroundTheWorldInKatyDays.