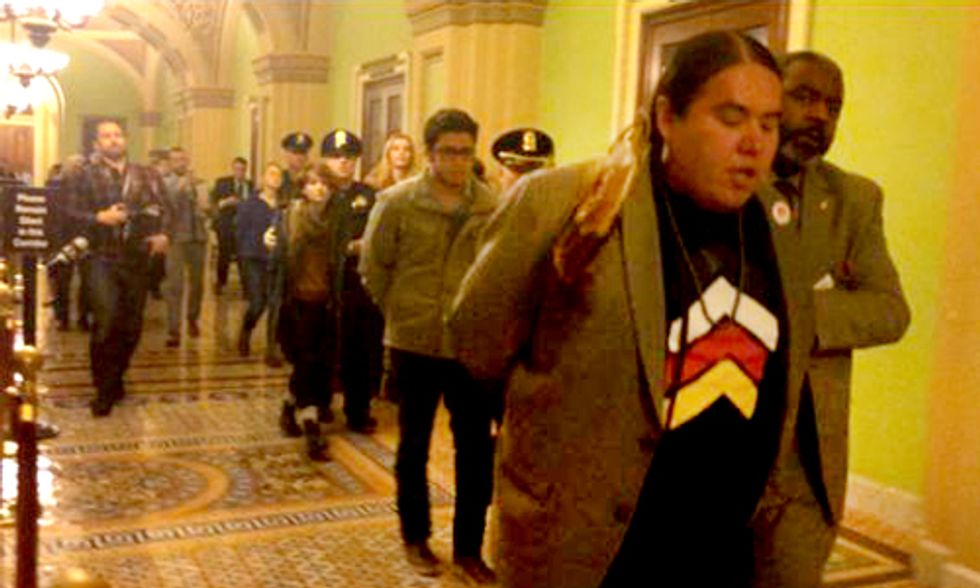 That sound was coming from Native Americans in the gallery, singing a traditional tribal tune. Five of them were removed from the gallery and arrested.

According to Red Power Media, one of the protesters was Greg Grey Cloud of the Rosebud Sioux tribe.

"Grey Cloud, who wore a headdress, continued singing as he was knocked to the floor and pulled to the wall of the hallway," said Red Power Media. "Protesters were handcuffed with plastic zip-ties while standing shoulder to shoulder, facing the wall. They were then paraded down a corridor and one of the protesters began singing again. The group was arrested for 'disrupting Congress.'"

The Rosebud Sioux tribe had already declared the House approval of the pipeline last Friday an "act of war" and said that it would close its tribal borders to pipeline construction.

“The House has now signed our death warrants and the death warrants of our children and grandchildren," Rosebud Sioux president Cyril L. Scott told the Lakota Voice. "The Rosebud Sioux Tribe will not allow this pipeline through our lands. We are outraged at the lack of intergovernmental co-operation. We are a sovereign nation and we are not being treated as such. Authorizing Keystone XL is an act of war against our people.”

The tribe is concerned about the potential for the pipeline to pollute their land which sits on top of the Ogallala Aquifer, one of the world's largest aquifers and a major source of agricultural and drinking water for Great Plains. They assert that a pipeline break and spill polluting the aquifer is virtually inevitable.

"The Lakota people have always been stewards of this land," said Scott. "We feel it is imperative that we provide safe and responsible alternative energy resources not only to Tribal members but to non-Tribal members as well. We need to stop focusing and investing in risky fossil fuel projects like TransCanada’s Keystone XL pipeline. We need to start remembering that the Earth is our mother and stop polluting her and start taking steps to preserve the land, water and our grandchildren’s future.”

The proposed pipeline route crosses Great Sioux Nation Treaty lands and within the current boundaries of the Rosebud and Cheyenne River Sioux reservations, both in South Dakota.