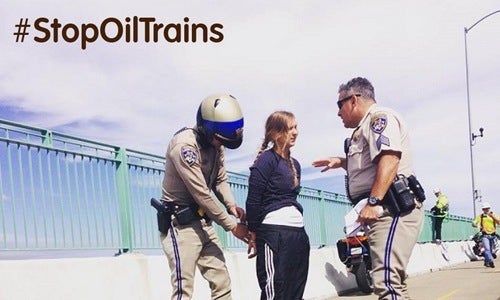 Monday was the second anniversary of the tragic Lac-Mégantic, Quebec, oil train disaster that killed 47 people. Since then, oil trains continue to derail and explode with five already this year. Four of the derailments occurred within just four weeks.

A coalition of environmental and social justice organizations including Sierra Club, Greenpeace, ForestEthics, Oil Change International, Center for Biological Diversity, Rainforest Action Network, 350.org, Friends of the Earth, Food and Water Watch and Earthworks, have launched a week of action to call for an end to crude by rail shipments. The coalition has organized more than 80 events across the U.S. and Canada to call for an immediate ban on oil trains.

Exploding crude oil trains do not belong on the nation’s rails, and 25 million Americans—most of them people of color—do not deserve to be living in a blast zone. The Department of Transportation needs to take responsibility, and rather than put forward wholly inadequate rules that jeopardize the health and safety of communities along rail lines, the administration should ban bomb trains outright.

For the health and safety of all Americans, we need to leave dirty, volatile fuels like tar sands and Bakken crude in the ground. We don’t have to choose between pipelines that spill and bomb trains that explode because we can choose clean energy instead. From Vermont to Oregon, organizers remember those who lost their lives in the disaster.

A Portland, OR, memorial to the 47 people incinerated by a bomb train in Lac Megantic. #stopoiltrains #LacMegantic pic.twitter.com/PYZhO0GQ8y