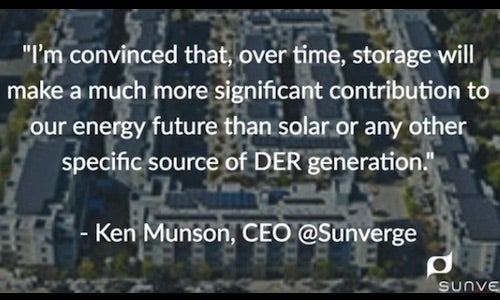 This summer, hundreds of homes Brooklyn and Queens will be recruited in an experiment to create a “clean virtual power plant” that feeds the utility grid with solar energy.

The aim is to build a mini power plant synchronized by a massive fleet of residential solar and energy storage systems. If everything goes to plan, the virtual power plant—which will be operated with cloud-based technology—will have a total capacity of 1.8 megawatts of solar power and 4 megawatt-hours of storage, making it the largest residential energy storage project in the U.S., as Bloomberg reported.

“This ambitious program with Con Edison represents a significant milestone in U.S. energy delivery, demonstrating that combining solar and energy storage can result in a stronger, more resilient grid while providing end customers the opportunity to save on electricity bills,” Howard Wenger, SunPower president of business units, said.

This experiment could mean big things for clean power production in the U.S. “If it all works out,” as CleanTechnica wrote, “New York City—and the New York State power grid—could provide the model for practically every other metropolis to follow.”

ConEd explained in its executive summary of the project that while solar energy has many benefits, from improved air quality to reduction in greenhouse gases, a solar system’s peak generation hours do not coincide with the utility’s peak load hours, which typically occur after 5 p.m. Because of this, high-carbon peaking turbines are still being used in the evenings, negating the environmental benefits of solar. CleanTechnica noted that these speaker plants probably burn natural gas from fracking operations.

But with the implementation of this clean virtual power plant, ConEd will be able to dispatch stored solar power to customers during peak periods instead of electricity generated by fossil fuels. Voltage fluctuations from partly cloudy days are also negated.

Homeowners in the program will receive a 7-9 kilowatt rooftop PV system and a 6 kilowatt/19.4 kilowatt-hour storage system. If a blackout occurs, these homes can tap into the energy stored by their batteries, meaning they no longer have to rely on a central power station.

“When a grid outage occurs, the integrated system will provide the customers participating in this demonstration continued power to critical components in their home automatically,” ConEd said. “This solution offers a simpler, cleaner alternative to the gasoline backup generators available in the market today.”

Batteries, such as the ones manufactured by Tesla for homes, businesses and utilities, are clearly beneficial because they supply power after the sun sets or when the power is out. Beyond that, batteries can potentially help the world transition to a carbon-free grid and ensure a cleaner future.

So how does a homeowner qualify for the program? According to SI Live, “Under the program, qualified participants will have leased high-efficiency SunPower solar systems installed on their homes to help reduce monthly electricity costs … For an additional low monthly payment, participants will have Sunverge Energy battery systems, owned by Con Edison, installed and connected to their SunPower systems. In the event of an outage, solar power stored in a participant’s battery storage system will be available to power certain appliances in the home.”