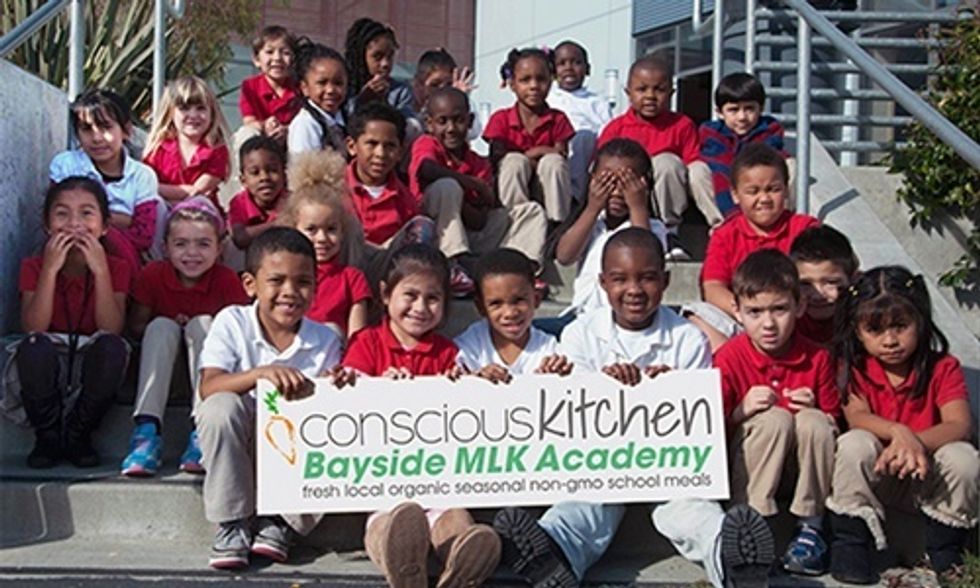 What if we could feed our students the nutritious, delicious and sustainably sourced food they truly deserve?

Well, when schools in the Sausalito Marin City School District open their doors this August, they will do just that, by becoming the first 100 percent organic and non-GMO (genetically modified organisms) school district in the country!

Student helping to serve lunch to his friends as part of the Conscious Kitchen Ambassadors team. Photo credit: Turning Green

“Students everywhere are vulnerable to pesticide residues and unsafe environmental toxins,” says Judi Shils, founder and executive director of Turning Green. “Not only does this program far exceed USDA nutritional standards, but it ties the health of our children to the health of our planet. It’s the first program to say that fundamentally, you cannot have one without the other.”

The Conscious Kitchen rethinks school food based on five foundational terms: Fresh, Local, Organic, Seasonal and Non-GMO, or FLOSN. All food is organic and non-GMO, and more than 90 percent of all produce is sourced from local farmers and purveyors.

This program is the first to take a stand against GMOs. While the long-term effects of GMOs are still uncertain, a growing body of evidence links them to a variety of health risks and environmental damage. An estimated 80 percent of items on most supermarket shelves contain GMOs, and they are ubiquitous in school food programs.

Meals are accompanied by a garden and nutrition curriculum that teaches students about where their food comes from, how it’s grown and why it’s good for them. Through this approach, The Conscious Kitchen hopes to curb childhood obesity while cultivating young champions of sustainable food.

For more information on The Conscious Kitchen, visit www.theconscious.kitchen. Here’s to nourishing our students, one delicious FLOSN meal at a time!