10 Oregon Schools Expand Classroom to Include the Great Outdoors 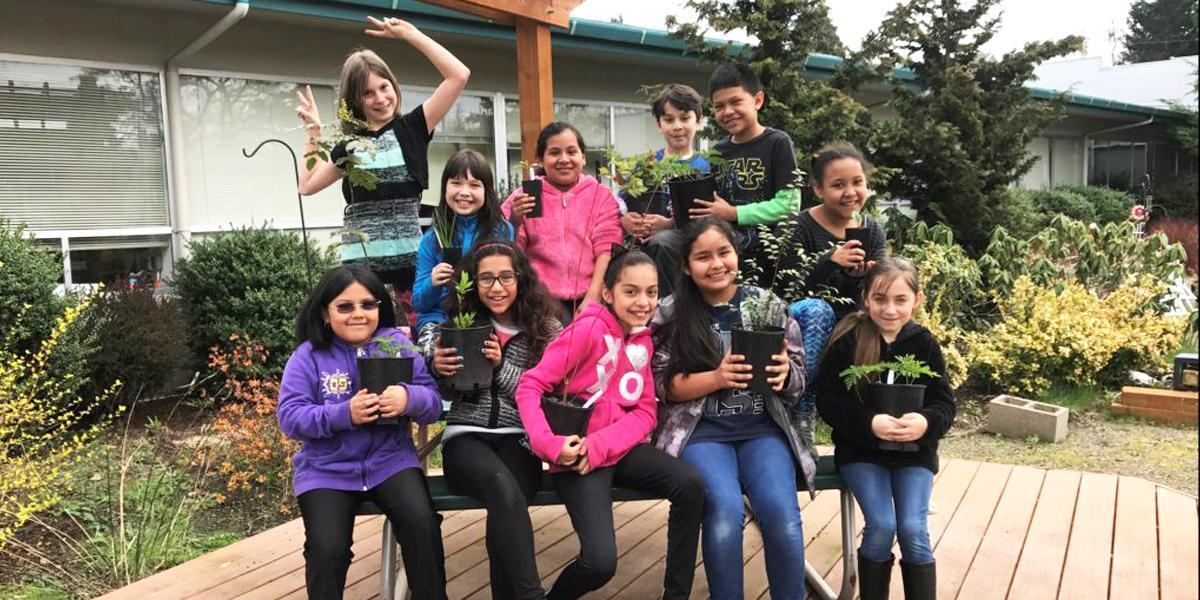 Winter and spring in Oregon can be cold, wet and muddy, but thanks to seed grants from the National Wildlife Federation (NWF), 10 schools in the Portland area are learning the joys of getting outside and getting their hands dirty despite weather conditions.

Part of the NWF’s Eco-Schools USA program, the $1,000 seed grants are funded by the Gray Family Foundation. The grant is used for green school projects like the one at Beaverton School District’s McKinley Elementary School. In fact, McKinley is one of only three schools in Oregon to be awarded native tree seedlings through the NWF’s Trees for Wildlife program this year.

“A lot of students at our school live in apartments,” said ESL teacher Debbie Abel, who works with fourth and fifth graders on several projects. “For some, this is the only opportunity they have to explore outdoors.”

That exploration has included digging for worms and learning about slugs—fun! Students are also identifying native and non-native trees on campus and writing up tags with facts about them. Each tag contains a QR code linked to plantsmap.com, where anyone interested can find out more information.

But the school’s biggest project is yet to come. McKinley is using the seed grant to purchase native plants such as wildflowers, ferns, herbs and shrubs as well as plant tags, ID books, soil, mulch, garden chairs and a mason bee condo. In honor of Earth Day later this month, students, parents, staff and volunteers will be planting 200 trees on the school’s extensive grounds as part of their efforts as a Certified Schoolyard Habitat.

A few miles away at French American International School, science lab instructor Molly Hamill said pathways available through Eco-Schools USA are helping teachers provide the curriculum that connects students to the outdoors and tie together the whole community.

When third graders explore the wooded trail on the school’s property, they are asked to look for signs of wildlife among the trees. Deer, owls, snakes, salamanders, frogs and even coyotes! And yes, all of these species have been spotted in the natural area.

“At the beginning of spring in the forest, the sound of birds is incredible,” said Hamill, noting that they can identify five different kinds of woodpeckers in the area. Students are excited to improve habitat for wildlife like birds and more by planting more than 50 tree seedlings awarded to the French American International School through the Trees for Wildlife program.

Hamill also said information from Eco-Schools USA makes it easy to tie in what’s being taught in the classroom to further learning. “We have freedom to pull in ideas and involve kids and go from there,” she said, explaining that it’s a lot more interesting and effective when you can teach kids about the parts of a flower, and then help them plant milkweed and watch the butterflies show up when those flowers bloom.

Yet some of the biggest buzz on campus, said Hamill, was generated by a project the seed grant made possible. Fish Eggs to Fry, a program administered by the Oregon Department of Fish and Wildlife with help from the NWF’s Oregon affiliate, the Association of Northwest Steelheaders, provided Hamill with trout eggs to nurture until they hatched and could be released into a local waterway.

In February, Molly Orr, AmeriCorps member with the Association of Northwest Steelheaders, and NWF delivered 500 rainbow trout eggs to the 20-gallon aquarium the school purchased with grant funds. For two weeks, Hamill said the aquarium became the most popular site on campus, providing learning opportunities for both students and adults. “We had kids checking the pH, temperature and the conditions of the fish,” said Hamill. “First graders journaled about the progress and recorded changes in what they saw.” Those first graders, she said, also learned that not all fish grow up to be clownfish, like Nemo.

The interest extended to the headmaster and other staff, who Hamill said stopped by the aquarium regularly, and parents who came in when they dropped their kids off in the morning.

When the trout were large enough, staff released them into a local pond approved by the Oregon Department of Fish and Wildlife. Now that the school has the equipment, Hamill hopes to sign up for the program again in the fall, when Chinook salmon eggs will be available.

That kind of enthusiasm and continuity of learning is exactly what Morgan Parks, Oregon education coordinator for the NWF, loves to hear. “School budgets are stretched thin,” said Parks. “Because the (Eco-Schools) pathways are linked to curriculum standards, it can help take the load off teachers.”

Parks said other schools receiving grants are working on a variety of pathway projects, including removing invasive species and replacing them with native plants, creating monarch butterfly gardens and community gardens, performing energy and waste audits and developing a bioswale on school grounds.