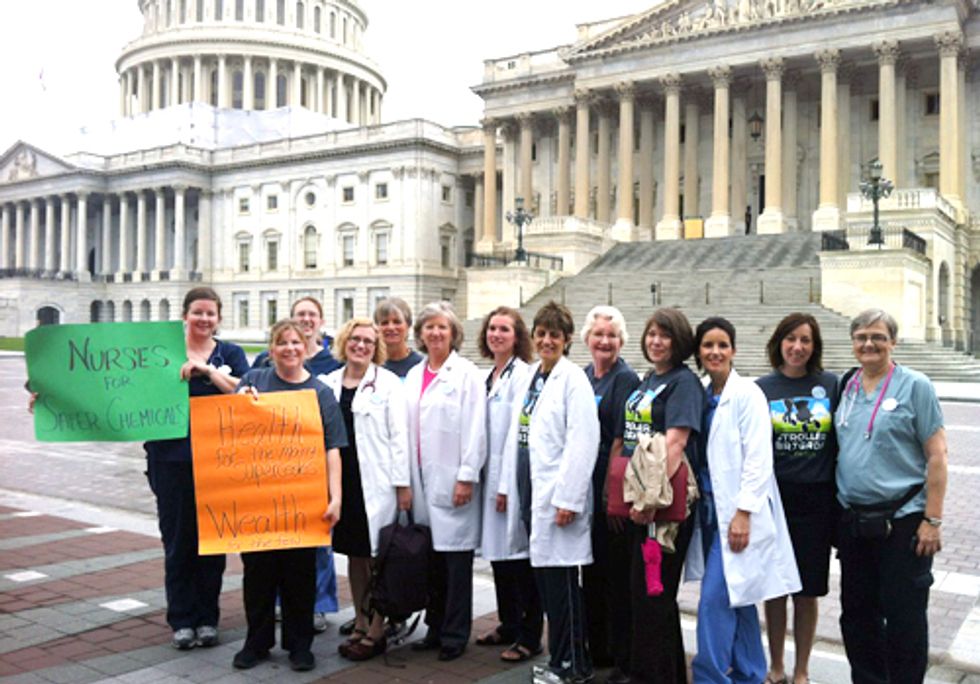 “If there is one overwhelming message from years of science, it’s that exposure to toxic chemicals early in our lives is responsible for some of the cancer, infertility and other health problems that affect millions of Americans,” said Andy Igrejas of Safer Chemicals, Healthy Families. “However, Congress has been paralyzed. We’re here to break the gridlock and demand common sense limits on toxic chemicals.”

The National Stroller Brigade builds on 30 local events in support of the Safe Chemicals Act, in locations as diverse as Little Rock and Omaha. Hundreds of moms—many with children in tow—flew or bused into Washington to deliver 130,000 petition signatures to their senators.

Moms turned out in large numbers in response to an investigative series by the Chicago Tribune, which exposed the chemical industry’s deceptive lobbying tactics to protect toxic chemicals. The moms divided up by state to deliver the thousands of petition signatures asking their senators to support the Safe Chemicals Act.

Polly Schlaff, a mother of three boys and a widow, told her compelling story about losing her high-school sweetheart to cancer at the age of 35. “My husband’s cancer had no genetic links, a fact both reassuring and troubling to a single mother bent on protecting her children from illness. No genetic flaw predisposes my sons to Ewing’s sarcoma, yet every day they, along with millions of other American children, are exposed to known and suspected carcinogens. This is unacceptable,” she said. Polly is a resident of Western Michigan and planned to visit Sen. Debbie Stabenow (D-MI) in the afternoon.

Matthew Zachary, a young adult cancer survivor and Founder of Stupid Cancer also joined the Brigade, “I am here so that no young adult has to go through what I went through. The feelings of isolation, fear and stigma are something no child should face, and if there is an opportunity to prevent future cases of cancer, we must.”

Last year, Jessica Alba joined leading public health experts on Capitol Hill to ask key Members of Congress to co-sponsor the Safe Chemicals Act, and now she sends her support to today’s event. Alba, an entrepreneur, actress, and Safer Chemicals, Healthy Families spokesperson said, “I hear stories from parents across the country every day—they are frustrated with the lack of transparency and honesty about the safety of the chemicals in consumer products. I stand in support of the parents in Washington asking for stronger laws that protect our babies. We deserve the peace of mind of safe and healthy products.”

The event shows the diverse support for the Safe Chemicals Act, bringing together people from more than 30 states and with varied political backgrounds. The Safe Chemicals Act is awaiting a vote in the Senate Environment and Public Works Committee. Participants at today’s event hope to add urgency and pressure to this pending vote.

“It’s shocking that toxic chemicals end up in everyday consumer products, and in our bodies, without anyone proving that they are safe.  The stroller brigade is carrying an important message to Congress that we're not going to stand by and let our kids continue to be exposed to chemicals that make them sick.  Concerned moms are the best weapons we have in this fight.  With their help, I will keep advancing the Safe Chemicals Act to reform our broken toxic chemical laws and provide a healthier future for our families," said U.S. Senator Frank R. Lautenberg (D-NJ).