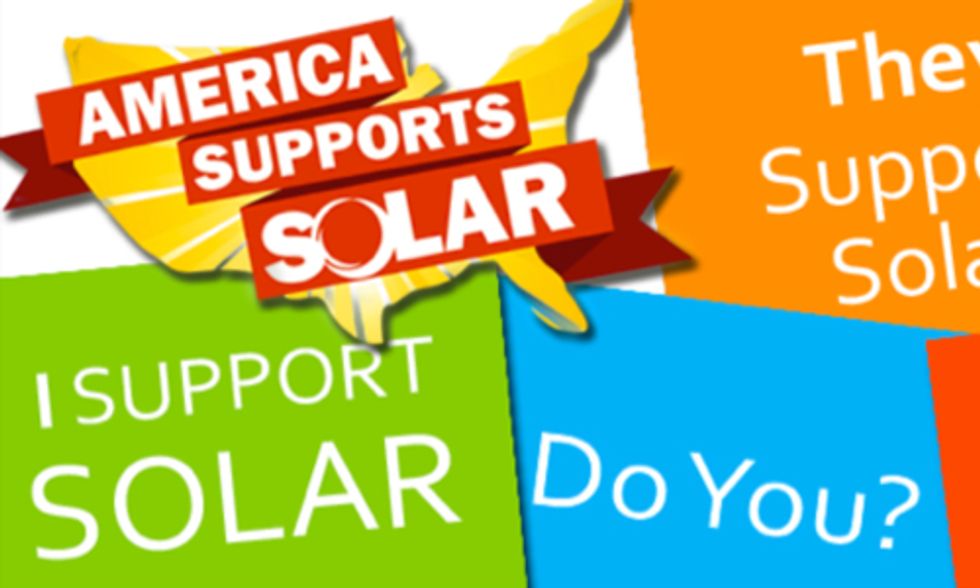 On January 24, 1974—with Richard Nixon in the White House, but embroiled in the Watergate scandal—five people met in the noisy basement of the Washington Hilton to discuss the possibility of establishing an association for the nascent solar energy industry.

They agreed to create "a broad-based trade association supporting prompt, orderly, widespread and open growth of solar energy resources." This was the beginning of the Solar Energy Industries Association’s (SEIA) four decades of successful advocacy.

Today, there are nearly 120,000 Americans employed by the U.S. solar industry at more than 6,100 American companies—with SEIA leading the fight over the years to expand markets, remove market barriers, strengthen the industry and educate Americans about the benefits of solar energy.

In recognition of this tremendous success, hundreds of thousands of people from across the United States and around the world are expected to take part in National “Shout Out For Solar” Day—set for Friday, January 24—and taking place on Facebook, Twitter and other social media platforms. This first-of-its-type event is being enthusiastically supported by hundreds of businesses and environmental groups nationwide.

The event coincides with SEIA’s 40th anniversary as a national trade association and the “voice” of solar energy in America. It will also mark the launch of a new “America Supports Solar” campaign, which will highlight solar energy’s explosive growth across the United States, as well as its record-shattering year in 2013. It’s estimated that the U.S. now has 13 gigawatts of installed solar capacity—enough to power more than 2 million American homes. What’s more, when all of the numbers are in, solar is expected to account for more electric capacity in the U.S. in 2013 than any other renewable energy source.

While 2013 was a record-breaking year, 2014 may be even better with 30 percent growth being forecast. Part of this unprecedented growth is due to the fact that the average price of a solar system has dropped by more than 50 percent since 2010, benefitting consumers, businesses, schools and government entities.

Every day via social media, millions of people around the world voice their support for solar energy and the enormous opportunities it provides for the future. National “Shout Out For Solar” Day will help to showcase this passion and excitement.

In recent years, the U.S. solar energy industry has helped to create thousands of new American jobs, save money for consumers, boost the economy and reduce pollution.  That’s a success story worthy of shouting from every rooftop in America—and around the world, too.