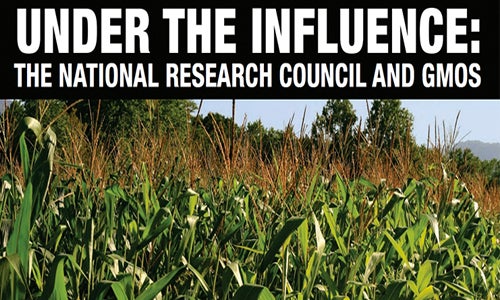 One day before the National Research Council (NRC) is scheduled to release a multi-year research report about genetically engineered (GMO) crops and food, Food & Water Watch has released an issue brief detailing the far-reaching conflicts of interest at the NRC and its parent organization, the National Academy of Sciences.

Under the Influence: The National Research Council and GMOs charts the millions of dollars in donations the NRC receives from biotech companies like Monsanto, documents the one-sided panels of scientists the NRC enlists to carry out its GMO studies and describes the revolving door of NRC staff directors who shuffle in and out of agriculture and biotech industry groups. The new issue brief also shows how NRC routinely arrives at watered-down scientific conclusions on agricultural issues based on industry science.

While companies like Monsanto and its academic partners are heavily involved in the NRC’s work on GMOs, critics have long been marginalized. Many groups have called on the NRC many times to reduce industry influence, noting how conflicts of interest clearly diminish its independence and scientific integrity.

More than half of the invited authors of the new NRC study are involved in GMO development or promotion or have ties to the biotechnology industry—some have consulted for or have received research funding from, biotech companies. NRC has not publicly disclosed these conflicts.

The NRC’s own conflicts-of-interest policy acknowledges its responsibility for conducting balanced science and the organization frequently trumpets its role in providing policy makers with independent, objective scientific advice on topics like GMOs. Congress chartered the parent organization of the NRC, the National Academy of Science, to offer objective guidance to the government that could be used to shape rules and regulations.

Food & Water Watch found similar industry influence in NRC’s work on other agricultural topics. The new issue brief documents conflicts of interest and industry bias in a 2015 NRC report on animal agriculture, authored by industry representatives from Monsanto and Smithfield Foods and funded by industry groups like Tyson Foods and the National Pork Board. In April 2016, the NRC began a new, in-depth study on improving regulations of GMOs that, once again, is very heavily biased toward industry perspectives.

Agribusiness companies like Monsanto have an outsized role at our public universities, at peer-reviewed journals and the NRC. We won’t have good public policy on new technologies like GMOs until these rampant conflicts of interest are addressed.

In response to the industry influence at the NRC, Food & Water Watch calls for the following changes: