As summer enters into full bloom, it’s time to celebrate all the birds, bees and bugs that make the fruits and flowers possible. From June 18 to 24, Pollinator Partnership (P2) is celebrating National Pollinator Week, which was designated by the U.S. Senate 11 years ago and has grown into an international event.

Pollinators are birds, bees, butterflies, beetles, bats and other small mammals that help plants reproduce by moving pollen grains from the male to female part of a plant. Plants can also self-pollinate or be pollinated by the wind, but one third of every bite of food we eat is thanks to animal pollinators, P2 reports.

You can support pollinators by creating a habitat for them in your yard, planting native or non-invasive plant species and avoiding pesticides, among other actions.

Here are some unique pollinators listed as endangered species in the U.S. to celebrate and protect this National Pollinators Week. 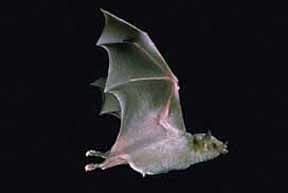 While fellow agave-pollinator the lesser long-nosed bat was removed from the endangered species list this spring, the population of the Mexican long-nosed bat is still declining. These bats spend the winter in Mexico’s Central Valley feeding on a variety of flowers. In the spring, mother bats and their babies move north, some of them crossing the border into Texas and New Mexico to feed on agave and cacti. They then follow late-blooming agave south again in the fall, according to the Texas Parks and Wildlife website.

According to a Center for Biological Diversity report, the bat is one of 93 endangered, threatened or candidate species likely to be harmed by President Donald Trump’s proposed border wall, and its migration patterns serve as a reminder that borders are artificial, not natural, barriers. In addition to opposing the border wall, if you live in Texas or New Mexico, you can support the Mexican long-nosed bat by avoiding entering caves or other potential roosting sites where bats may be resting, refraining from cutting plants the bats may depend upon and planting agave in your yard, Texas Parks and Wildlife advises. 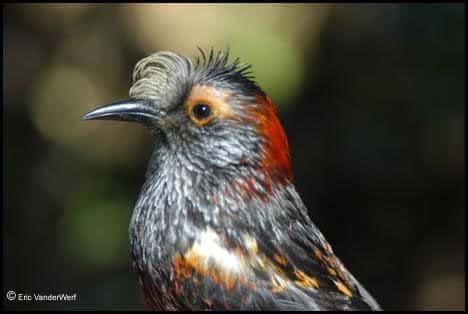 The ‘Ākohekohe, or crested honeycreeper in English, is the largest bird of its type on the island of Maui. It used to have a range of 485 square miles on both Maui and Moloka’i but now just inhabits five percent of its historic territory, living mostly on the Haleakala volcano. It pollinates the `ōhi`a plant, which is also its main food source, according to its U.S. Fish and Wildlife Service (USFWS) page.

Long threatened by deforestation and invasive species, the ‘Ākohekohe is now further at risk as climate change expands the range of malaria-carrying mosquitoes into Maui’s mountains, the Audubon Society reported in 2015. Scientists are working to reduce the mosquito population by removing larvae and introducing sterilized mosquitoes.

In 2017, the rusty patched bumble bee became the first wild bee species in the continental U.S. to be listed under the Endangered Species Act, Reuters reported. The species has declined by 87 percent in the last 20 years, according to its USFWS page. The USFWS blames disease, climate change, pesticides, habitat loss and intensive agriculture.

The USFWS also provides tips for backyard conservationists. It is important to plant a range of native, flowering plants that bloom from April through October. Here is a list of species the bees have been known to favor. Avoiding pesticides is also crucial. Because bees and other pollinators need safe places to nest and winter, the USFWS further recommends leaving part of your yard unmowed during the summer and some leaves unraked during the fall. 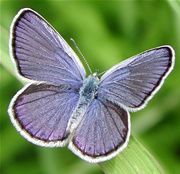 The Karner blue butterfly depends on specialized habitats in the Midwestern and Northeastern U.S. where wild blue lupine bloom, since Karner blue caterpillars only feed on wild blue lupine leaves, according to the species’ USFWS page. Wild blue lupine grow in the sandy parts of pine barrens, oak savannas and lakeshore dunes and usually require fires or other disturbances to open sunny spots for them.