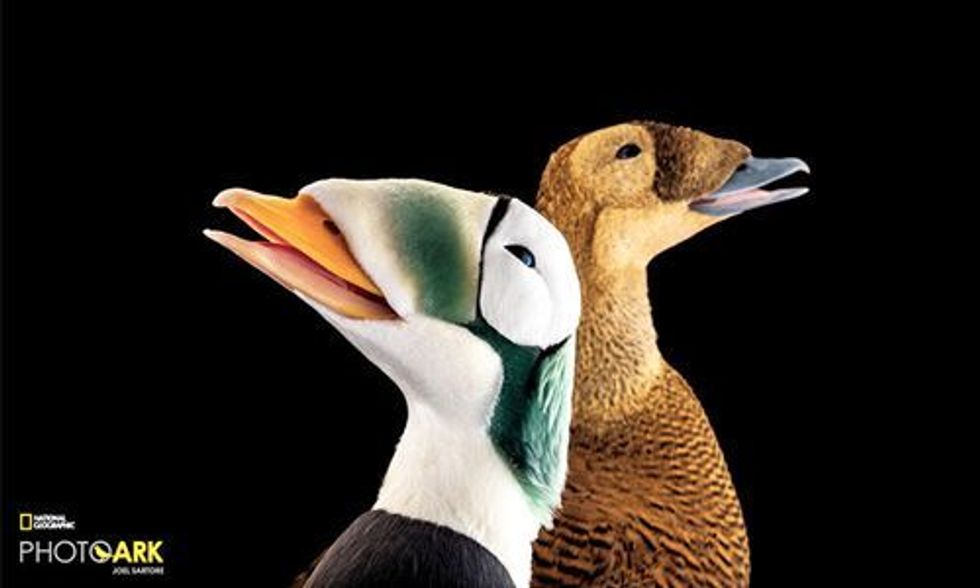 Every species adapts to its environment over time (or dies out trying), but climate change is simply happening too fast for most plants and animals to get their evolutionary bearings. Extreme weather, shifting seasons, changes in food availability and emerging diseases are just a small sampling of how global warming is wreaking havoc on wildlife—especially species that are already having a rough go of it.

But there's a minority of creatures actually thriving (for now, anyway) under the same conditions making life impossible for so many others. In the November issue of National Geographic, dedicated solely to climate change, journalist Jennifer Holland shows us which animals are adapting and which ... well, not so much. The photos and captions used in this article are excerpted from her article.

All the images come from the Photo Ark, photographer Joel Sartore's ambitious project to take portraits of the world's 12,000 captive species. So far, Sartore has documented about 5,000 and he's still busy clicking away—his goal is to inspire people to stop the extinction crisis before his subjects are gone in a flash.

Spectacled Eider: Specialized needs put these northern ducks at risk. In winter, the birds gather in a small, cold, nutrient-rich area of the Bering Sea to dive for clams and other marine life. But as ice retreats, spectacled eiders’ habitats and access to food resources in their wintering grounds are changing. Meanwhile coastal changes are altering the ducks’ breeding habitat on tundra wetlands. Alaska Sealife Center, Seward. Photo credit: Joel Sartore / National Geographic
Merriam’s Kangaroo Rat: This pair takes the heat in stride. In the southwestern U.S. and Mexico, kangaroo rats are already well-adapted to arid conditions, and they’ve stayed robust during previous temperature hikes. The rodents are quick and flexible reproducers, and their diet of diverse seeds and occasional insects gives them wiggle room if some plant and bug species fizzle in the heat. Fort Worth Zoo, Texas. Photo credit: Joel Sartore / National Geographic
Arctic Fox: As tundra habitat melts, this snow-loving fox will find fewer seal carcasses left on ice by polar bears and fewer lemmings—food for fox pups—whose numbers peak in the coldest winters. It may also face competition as the more adaptable red fox expands north. Great Bend Brit Spaugh Zoo, Kansas. Photo credit: Joel Sartore / National Geographic
American Dog Tick: Ticks are faring well. Climate affects the critter's life cycle, influencing the intricate dance among the arachnid, its infected hosts, and the diseases it spreads (for the American dog tick, that includes Rocky Mountain spotted fever and tularemia). But the consequences of changing climate patterns are complex and inconsistent: Disease transmission to humans may go up in some areas, down in others. Meanwhile, in the eastern U.S. certain species, like the black-legged tick, are emerging weeks early from their winter slumber to feed—and are adapting well to the new schedule. Lincoln, Nebraska. Photo credit: Joel Sartore / National Geographic
Peninsular Pronghorn: Some wild pronghorn have shown marked recovery with protection, but this subspecies remains at the edge. Existing only on the Baja California Sur peninsula, fewer than 100 wild peninsular pronghorn survive, along with a herd of captive animals used to help bolster the wild population. The ungulates are adapted to desert conditions, but further warming and reduced rainfall will affect both their winter and summer forage. Los Angeles Zoo, California. Photo credit: Joel Sartore / National Geographic

White-Fronted Lemur: Over the next 70 years, lemur species on Madagascar could lose about 60 percent of their habitat due to climate change. If climate were the animals’ only foe, perhaps the white-fronted lemur could survive; climate change won’t shrink its lowland and montane habitat. But other factors may—chief among them, slash-and-burn agriculture and a growing human population. Naples Zoo, Florida. Photo credit: Joel Sartore / National Geographic
American Bullfrog: This native of North America—a voracious predator and tough competitor that spreads amphibian disease—has made its way onto other continents and spread like an army, especially in South America. It is by leaps and bounds one of the worst (most successful) invasive species on the planet. Climate change will slow its advance in some areas, but other highly biodiverse habitats will become more bullfrog friendly, meaning further raids against native species. Bennet, Nebraska. Photo credit: Joel Sartore / National Geographic
Bengal Tiger: Wild tigers are in drastic decline, with perhaps 3,000 left. Eventually they’ll need scuba gear to live in the mangrove-dominated Sundarbans of Bangladesh. A World Wildlife Fund–led study reports that a predicted 11-inch rise above sea levels from the year 2000 would destroy most tiger habitat in that region. Better news in Bhutan: As forests move upslope, tigers will likely shift with them, heading deep into northern parklands along major river valleys. Sadly, they would displace or prey on already struggling snow leopards. Alabama Gulf Coast Zoo. Photo credit: Joel Sartore / National Geographic
The November issue of National Geographic is dedicated to climate change.