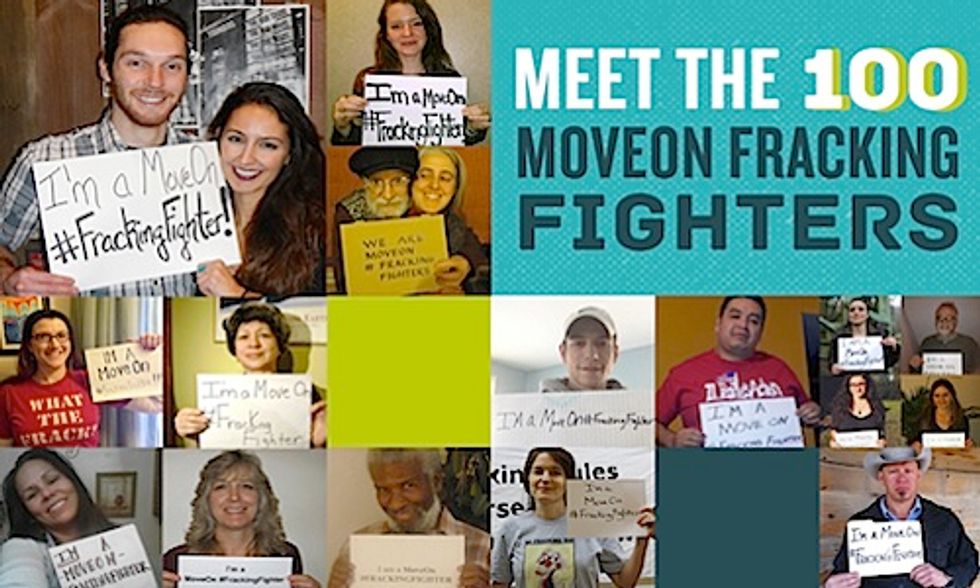 As the national movement to ban fracking picks up steam, MoveOn.org Civic Action is announcing a new #FrackingFighter initiative to support 100 grassroots activists who are working to ban fracking in their local communities. MoveOn is awarding a total of $50,000 to the Fracking Fighters, along with materials, training and strategic support.

The initiative seeks to slow down the fracking boom that is anticipated to occur across the U.S. in 2014 and beyond. Natural gas production in the U.S., led by fracking, is predicted to increase by 56 percent over the next 26 years—propelling the country ahead of Russia and Saudi Arabia as the world’s top oil and gas producer. One major oil and gas producer, Antero Resources, whose wells are located in the Appalachians, is expected to increase its output by 76 percent in 2014, and 47 percent the year after. Antero Resources uses up to six million gallons of water to frack a single well.

Despite these troubling trends, a number of communities have successfully halted fracking at the local level over the last year--demonstrating that campaigns to ban fracking at the local level can be effective. In New York, the Erie County legislature voted overwhelmingly to ban fracking on county-owned property after being pressured by local activists. In Colorado, MoveOn members contributed to four successful referendums that banned or placed moratoriums on fracking in local communities.

A few #FrackingFighter campaigns are highlighted below:

Susan Weber, Siena, NY: "The goal of my campaign is to increase the pressure on our elected leaders, primarily Governor Cuomo, to make it impossible for him to approve fracking,” explained Susan Weber. “People's health is compromised, lands are forever ruined, property values are trashed without compensation and there is no way to completely mitigate or safely manage these impacts.”

Ashley Williams, Ottawa, IL: "The goal of my campaign is to stop the proliferation of the frac-sand industry in my community,” explained Williams. “Sand mining for the purpose of hydraulic fracturing will result in calamitous long-term repercussions for Starved Rock State Park’s tourism, local residents, and the environment. I want to see a greener, more energy independent horizon for LaSalle County, and for Illinois."