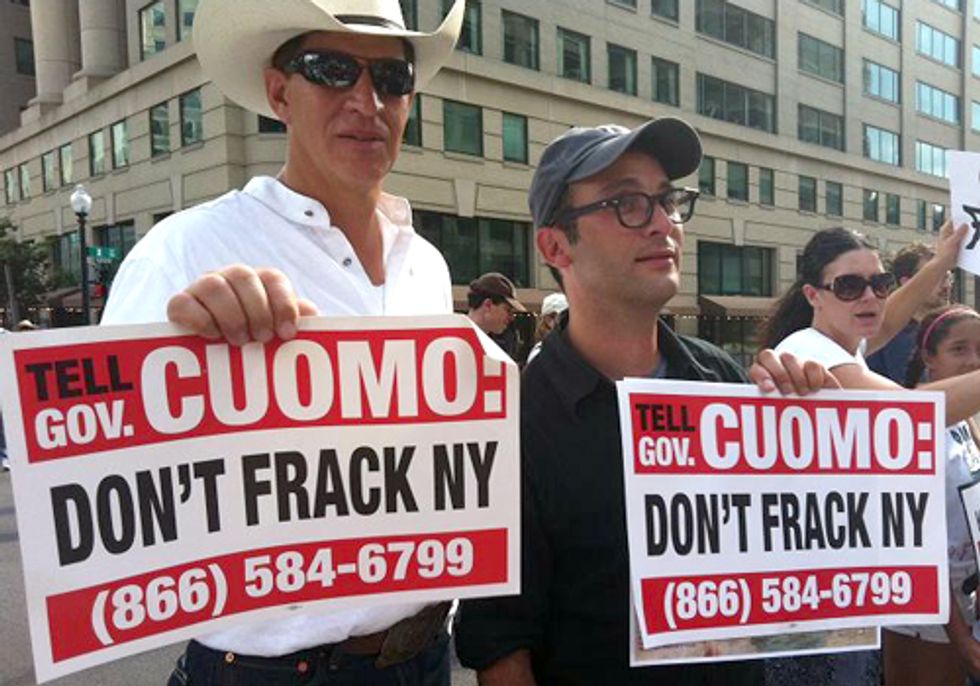 On July 28 at the Stop the Frack Attack rally on the National Mall in Washington, D.C., you could easily have convinced yourself you were at an anti-fracking rally in Albany, N.Y. There were so many signs urging people to call Gov. Andrew Cuomo that it is clear concerned citizens across the country have their eyes on New York.

And it wasn’t only New Yorkers at the rally saying that if Gov. Cuomo allows fracking in New York he will never be president. Folks from across the country are looking to Gov. Cuomo as our best chance to stop the spread of fracking.

Washington, D.C. may be four hours from New York, but in some ways it wasn’t surprising that so many activists from other states are concerned about what Gov. Cuomo will do. Fracking is a drilling process that pumps millions of gallons of water laced with chemicals into the ground to obtain oil and natural gas. By now, many across the country are familiar with the risks fracking poses to our drinking water, our air and our quality of life. Further, many have seen the disturbing images from Pennsylvania of people who can light their tap water on fire.

It’s no secret to activists from all over that New York is our best chance to make a real stand against the oil and gas companies. Unlike Pennsylvania or Ohio, New York isn’t controlled by extreme right-wing politicians. Perhaps more importantly, the oil and gas companies are not yet completely entrenched in all layers of government in the state like they are in so many other parts of the country. Given all this, it should make banning fracking in New York a pretty simple proposition.

There’s just one problem. Gov. Cuomo has presidential aspirations in 2016. If there is one thing we all know about running for president, it’s that it takes a lot of money. The governor thus finds himself in a classic dilemma. On the one hand he doesn’t want to go against the oil and gas companies, because he'll need their money to run a viable presidential campaign. On the other hand, he can’t afford to completely alienate his base and still win the nomination.

The message in D.C. this weekend was clear. The progressive base in New York, and across America, is adamantly opposed to fracking. It’s time for Gov. Cuomo to realize that some things are more important than money.

He may think he can’t afford to anger the oil and gas companies just four years before he runs for president, but the reality is he can’t afford to enrage the progressive base by accepting fracking. Gov. Cuomo must not allow fracking in any part of New York.