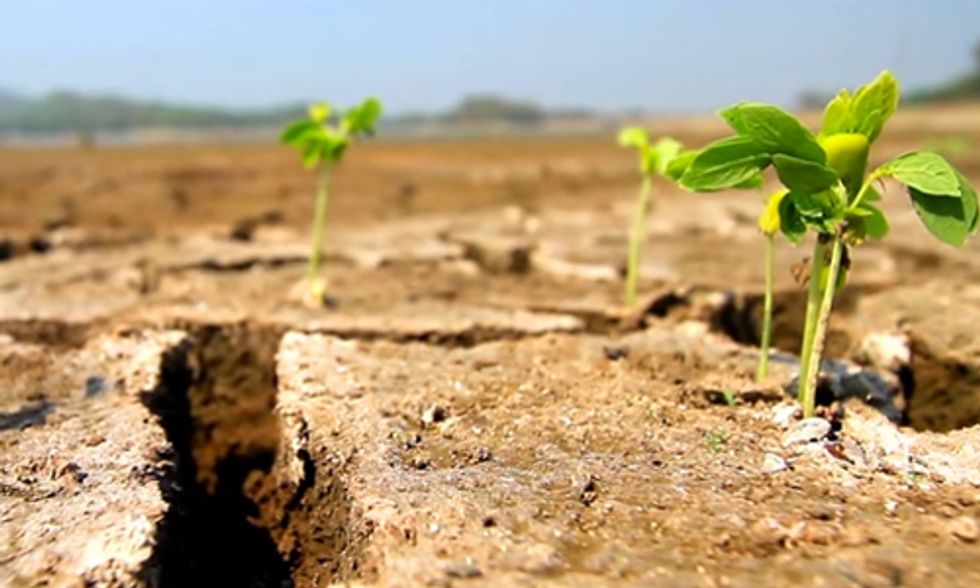 The drought in California, going into its fourth year, has been in the news, especially since California produces much of the country's food. But a new NASA study, published this week in the journal Science Advances, suggests that the U.S. could be looking at much worse. It predicts multi-decade "megadroughts" of more than 30 years by the end of the 21st century if we don't significantly reduce greenhouse gas emissions.

"Recent droughts such as the ongoing drought in California or the Southwest, or even historical droughts such as the Dust Bowl in the 1930s, these are naturally occurring droughts that typically last several years or sometimes almost a decade," said the study's lead author Ben Cook, a climate scientist at NASA's Goddard Institute for Space Studies and Columbia University's Lamont-Doherty Earth Observatory. "What we're seeing is that with climate change many of these types of droughts will likely last for 20, 30, sometimes even 40 years."

How bad these droughts will get is tied to how much greenhouse gas emissions humans generate in future years. Cook and his colleagues say the current risk of a megadrought is 12 percent. If greenhouse gas emissions stop increasing by the mid-21st century, they project the risk at more than 60 percent in the second half of the 21st century. And if they continue to rise at current rates, the researchers say, there is an 80 percent chance of a megadrought in the Southwest and Central Plains between 2050 and 2099. "Alternatively, if the world were to take aggressive actions to reduce emissions, the model still showed drought but the trends would be less severe," they found.

Cook said this study is more robust than previous research, which used fewer drought indictors and few climate models. This study used 17 different climate models, all of which showed a drier planet "thanks to human-induced climate change," says NASA.

"What I think really stands out in the paper is the consistency between different metrics of soil moisture and the findings across all the different climate models," said climate scientist Kevin Anchukaitis of Woods Hole Oceanographic Institution, who was not involved in the study. "It is rare to see all signs pointing so unwaveringly toward the same result, in this case a highly elevated risk of future megadroughts in the United States."

This is also the first study to compare future drought projections to droughts over the last 1,000 years, using tree-ring information to estimate droughts beyond the last 150 years. The researchers looked at megadroughts of 30-50 years that occurred in North America between 1100 and 1300 and compared them with projected late 21st-century droughts. They found that whether greenhouse gas emissions stop increasing or continue to increase at the current rate, the likelihood of drier conditions and droughts lasting 30 years or more is greater.

"We can't really understand the full variability and the full dynamics of drought over western North America by focusing only on the last century or so," said Cook. "We have to go to the paleoclimate record, looking at these much longer timescales, when much more extreme and extensive drought events happened, to really come up with an appreciation for the full potential drought dynamics in the system."

Megadroughts could require adaptations well beyond anything the U.S. has ever faced. Image credit: NASA

Anchukaitis agreed that comparing medieval-era droughts with projected ones is useful.

"Those droughts had profound ramifications for societies living in North America at the time," he said. "These findings require us to think about how we would adapt if even more severe droughts lasting over a decade were to occur in our future."

Those adaptations would be more challenging than anything we've seen in the past, says Cook.

"The droughts represent events that nobody in the history of the U.S. has ever had to deal with," he said. "Even in the modern era, droughts such as the ongoing droughts in California and the Southwest, these normal droughts act as major stressors on water resources in the region. So we expect that with these much longer droughts, it's going to be even more impactful and cause even more problems for agriculture and ecosystems in the region."