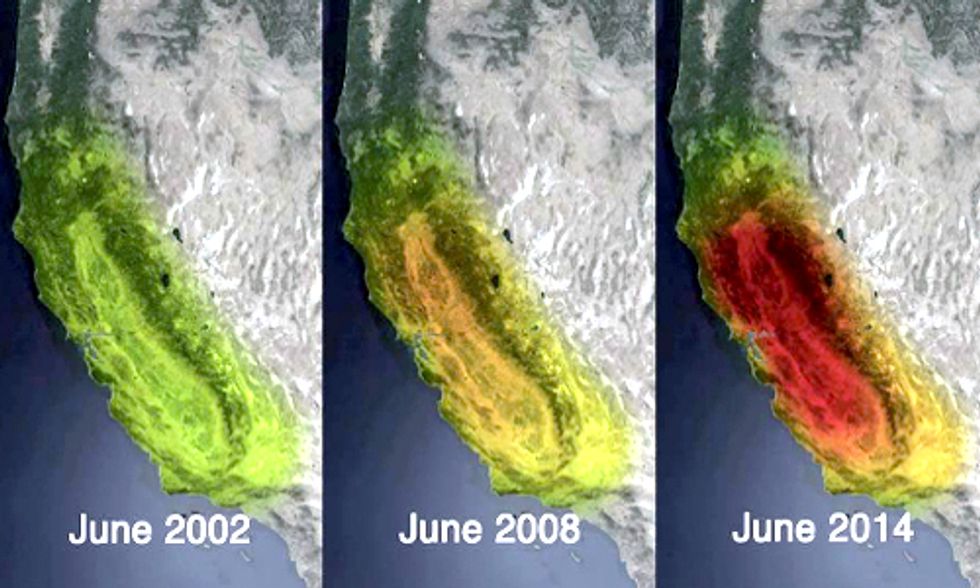 NASA's Gravity Recovery and Climate Experiment (GRACE) program has released a series of satellite images, taken in June 2002, June 2008 and June of this year, showing the stunning groundwater loss in California which is in its third year of record drought.

California's rapidily disappearing groundwater was tracked by NASA and its partners over a period of 12 years. Image credit: NASA/JPL-Caltech/University of California, Irvine

The prolonged drought has impacted everything from agriculture to fisheries to residential use, worsened and prolonged the wildfire season and created conflicts over the use of water resources. That has included calls for banning water-intensive fracking and disputes over the diversion of river water for the state's even more water-intensive agriculture sector, primarily in its fertile Central Valley.

"California's Sacramento and San Joaquin River basins, including the Central Valley, have suffered the greatest losses, in part due to increased groundwater pumping to support agricultural production," said NASA. "Between 2011 and 2014, the combined river basins have lost 4 trillion gallons of water each year, an amount far greater than California's 38 million residents use in cities and homes annually."

Gov. Brown declared a state of emergency in January after the state had its lowest recorded rainfall in its history.