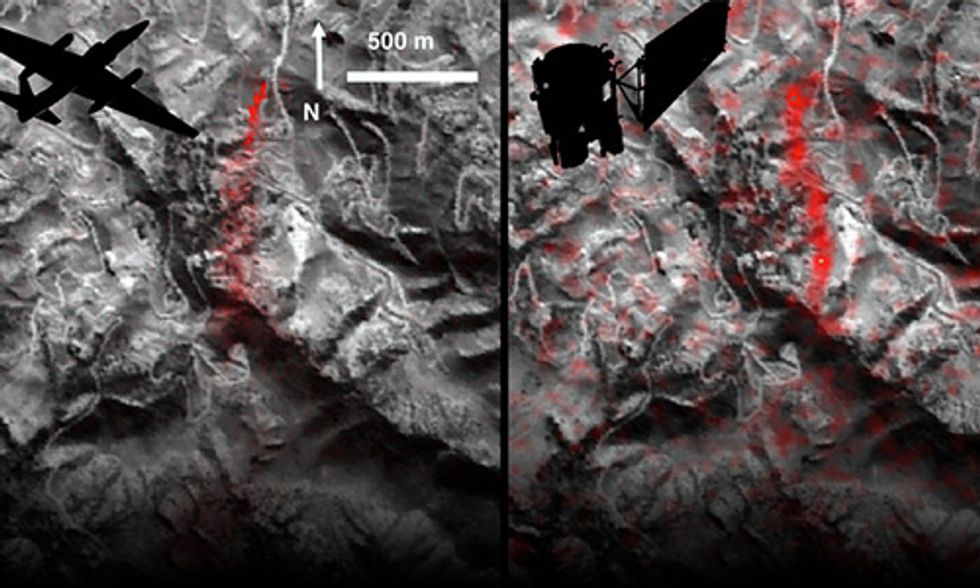 California's 2015 methane leak was so large it could be seen from space, according to a National Aeronautics and Space Administration (NASA) statement released Tuesday.

Aliso Canyon's methane leak in Porter Ranch in October 2015 marked the first time an orbiting spacecraft measured a leak from a single facility on Earth. The leak was spotted by the Hyperion spectrometer on NASA's Earth Observing-1, according to a study by David R. Thompson, of NASA's Jet Propulsion Laboratory, recently published in the Geophysical Research Letters journal.

NASA's statement explained: "The observation ... is an important breakthrough in our ability to eventually measure and monitor emissions of this potent greenhouse gas from space."

The Hyperion spectrometer was able to detect methane on three separate occasions, Thompson's paper states. NASA said the research was part of an investigation into the accidental leak, which released 94,500 tons of methane into the atmosphere, according to the latest data. The orbit observations were consistent with airborne measurements, NASA reported.

Developing more instruments with similar capabilities to the Hyperion, or with even better ones, will help scientists understand the amount of methane produced by human activities and spot areas on Earth's surface that are big releasers.

"The percentage of atmospheric methane produced through human activities remains poorly understood," Thompson said. "Future instruments with much greater sensitivity on orbiting satellites can help resolve this question by surveying the biggest sources around the world, so that we can better understand and address this unknown factor in greenhouse gas emissions."

The Hyperion spectrometer measures discreet wavelengths of light. It scans in "many hundreds of wavelengths," Thompson told The Washington Post, allowing scientists to identify specific gases.

“Every gas leaves its fingerprint on the light that passes through it," he said. “So what the algorithms we applied do is they examine the imagery from the spacecraft to see the very unique spectral signature of methane, and then map it over wide locations."