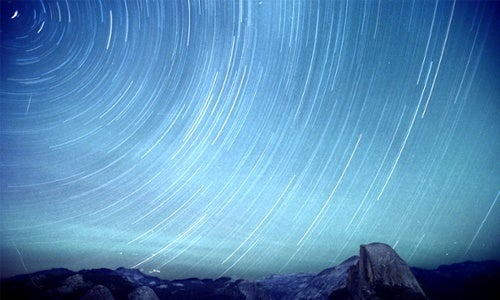 One of the best meteor showers of the year—the Perseids—will delight stargazers this week. “If you see one meteor shower this year, make it August’s Perseids or December’s Geminids,” NASA says. “The Perseids feature fast and bright meteors that frequently leave trains, and in 2015 there will be no moonlight to upstage the shower.” Plus, August is a lot warmer than December for those of us in the Northern Hemisphere.

View the Perseid meteor showers in the super-early morning hours of Aug. 11-13. Where to go: http://t.co/Gm0I6ILDyI pic.twitter.com/PHj7NCm3NN

The Perseids can be best seen during the pre-dawn hours from Aug. 11 through Aug. 14, according to Earth Sky, with the best show on the 13th. The slender waning crescent moon won’t obstruct the views for those hoping to catch a glimpse of the show. The moon “is not the meteor watcher’s friend,” says NASA. “Light reflecting off a bright moon can be just as detrimental to good meteor viewing as those bright lights of the big city.”

During peak meteor activity, there could be up to 100 meteors an hour, says NASA. But be sure to keep your eyes peeled because they will be traveling at 37 miles per second. The Perseids, like all meteor showers, derives its name from the constellation that it radiates out of. The Perseids gets its name from the constellation Perseus, just to the left of the Pleiades, the Seven Sisters constellation. But fret not, newbie stargazers. “You don’t need to know Perseus to watch the shower; instead, the meteors appear in all parts of the sky,” says Earth Sky.

So just what is the shower anyway? “Every year, the dust particles from the tail of the Swift-Tuttle comet pass the Earth orbit and burn in our atmosphere (about 70 miles above us) from mid-July to the end of August,” explains Vincent Perlerin at the American Meteor Society.

“The meteors are in fact glowing columns of air resulting from the burn of these particles,” he says. “When the dust and ice hits our atmosphere at around 37 miles per second, they disintegrate high up in the atmosphere after making a brilliant flash of light. Most of these particles are the size of sand grains, while a few are as big as peas. They can streak across the sky in a flash, or persist for several seconds before vanishing.”

Watch this awesome footage of the Perseids meteor shower in 2013: