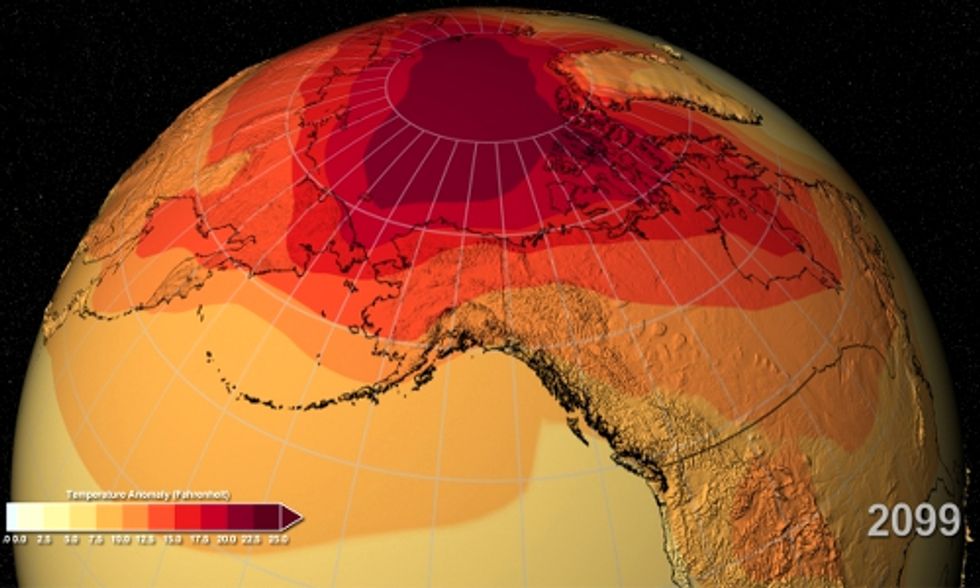 NASA says we should expect the planet to become even warmer than researchers thought in the past.

According to new research, Drew Shindell, a climatologist at NASA's Goddard Institute for Space Studies in New York, says the planet could become 20 percent warmer than previous estimates. The image included in a briefing on the study shows temperature-increase estimates for 2099.

A new NASA study suggests that the Earth will warm by about 20 percent. Graphic credit: NASA Scientific Visualization Studio/NASA Center for Climate Stimulation

According to a statement on the study from NASA, researchers developing warming estimates by calculating the Earth's "transient climate response." This measure determines how much global temperatures will change as carbon dioxide's atmospheric presence grows at about 1 percent per year until the total amount of atmospheric carbon dioxide has doubled. Transient climate responses have range from near 2.52 degrees in recent research, to the Intergovernmental Panel on Climate Change's (IPCC) estimate of 1.8 degrees. Shindell's study estimates a transient climate response of 3.06 degrees. He says it is unlikely values would cool below 2.34 degrees.

His study also considers how aerosols, or airborne particles contribute to climate change in the Northern Hemisphere. Aerosols are produced by both natural sources like volcanoes and wildfires, as well as by manufacturing, driving automobiles, producing energy  and more. Some aerosols cause warming, depending on their components, while some create a cooling effect. According to NASA, it is necessary to account for atmospheric aerosols in order to understand the role carbon dioxide emissions have on global warming.

"Here, I analyze results from recent climate modeling inter-comparison projects to demonstrate that transient climate sensitivity to historical aerosols and ozone is substantially greater than the transient climate sensitivity to carbon dioxide," Shindell wrote in an introductory letter to the study, which was published in Nature Climate Change journal. "This enhanced sensitivity is primarily caused by more of the forcing being located at Northern Hemisphere middle to high latitudes where it triggers more rapid land responses and stronger feedbacks."

Temperatures around the world have increased at a rate of 0.22 degrees per decade since 1951, according to NASA. Since 1998, the warming rate decreased to 0.09 degrees per decade, despite the rise of carbon dioxide, which is the most significant greenhouse gas generated by humans.

"Working on the IPCC, there was a lot of discussion of climate sensitivity since it's so important for our future," said Shindell, who served as lead author of the IPCC Fifth Assessment Report's chapter on anthropogenic and natural radiative forcing. "The conclusion was that the lower end of the expected warming range was smaller than we thought before. That was a big discussion. Yet, I kept thinking, we know the Northern Hemisphere has a disproportionate effect, and some pollutants are unevenly distributed. But we don't take that into account. I wanted to quantify how much the location mattered."

Shindell's research indicates reducing greenhouse gas emissions is the surest way to withstand "the most damaging consequences of climate change," according to NASA.

"I wish it weren't so," Shindell said, "but forewarned is forearmed."