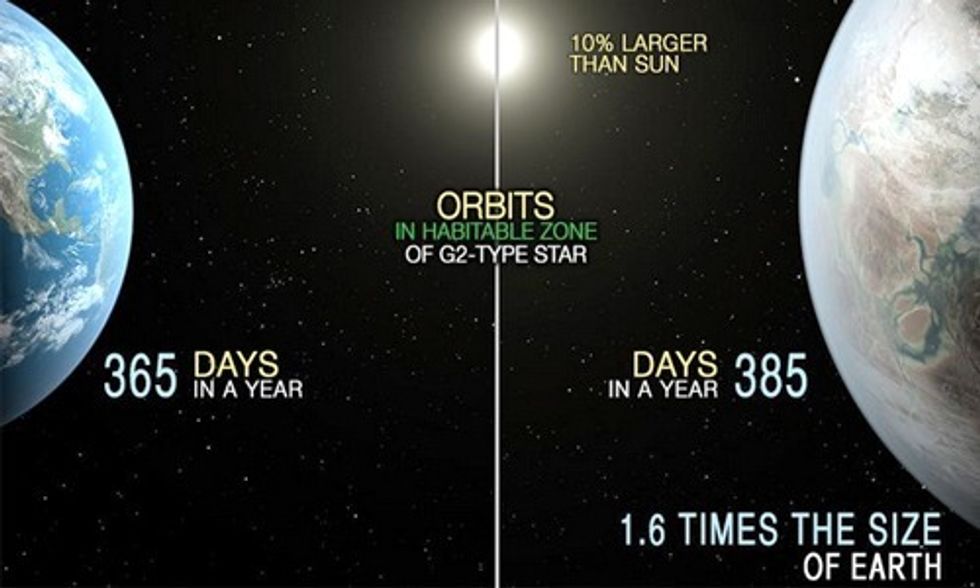 NASA announced yesterday that its Kepler spacecraft has discovered "the first near-Earth-size planet in the 'habitable zone' around a sun-like star." NASA believes there may be up to another 11 other "new small habitable zone candidate planets," marking "another milestone in the journey to finding another 'Earth,'" according to the agency's press release.

The $600 million Kepler mission started in 2009 to survey the Milky Way for habitable planets. To date, it has discovered more than 1,000 planets. "Twelve of the new planet candidates have diameters between one to two times that of Earth, and orbit in their star's habitable zone. Of these, nine orbit stars that are similar to our sun in size and temperature," says NASA.

A "habitable zone" is "the area around a star where liquid water could pool on the surface of an orbiting planet," or put in simpler terms, it's the Goldilocks zone—not too hot and not too cold, so water neither freezes nor boils. "Though NASA can't say for sure whether the planet is rocky like ours or has water and air, it's the closest match yet found," reports CNN.

Scientists say the planet has a "good chance of being rocky" and a visitor would experience gravity twice that of Earth's. "On the 20th anniversary year of the discovery that proved other suns host planets, the Kepler exoplanet explorer has discovered a planet and star which most closely resemble the Earth and our Sun," said John Grunsfeld, associate administrator of NASA’s Science Mission Directorate. “This exciting result brings us one step closer to finding an Earth 2.0."

The new planet, Kepler-452b, is an "older, bigger cousin to Earth, providing an opportunity to understand and reflect upon Earth’s evolving environment," NASA scientist Jon Jenkins said. The planet, which is 60 percent larger than Earth, is located 1,400 light-years away in the constellation Cygnus. "Because it's spent so long orbiting in this zone—6 billion years—it's had plenty of time to brew life," Jenkins said. "That's substantial opportunity for life to arise, should all the necessary ingredients and conditions for life exist on this planet."

Check out this video from NASA explaining the newly discovered planet: