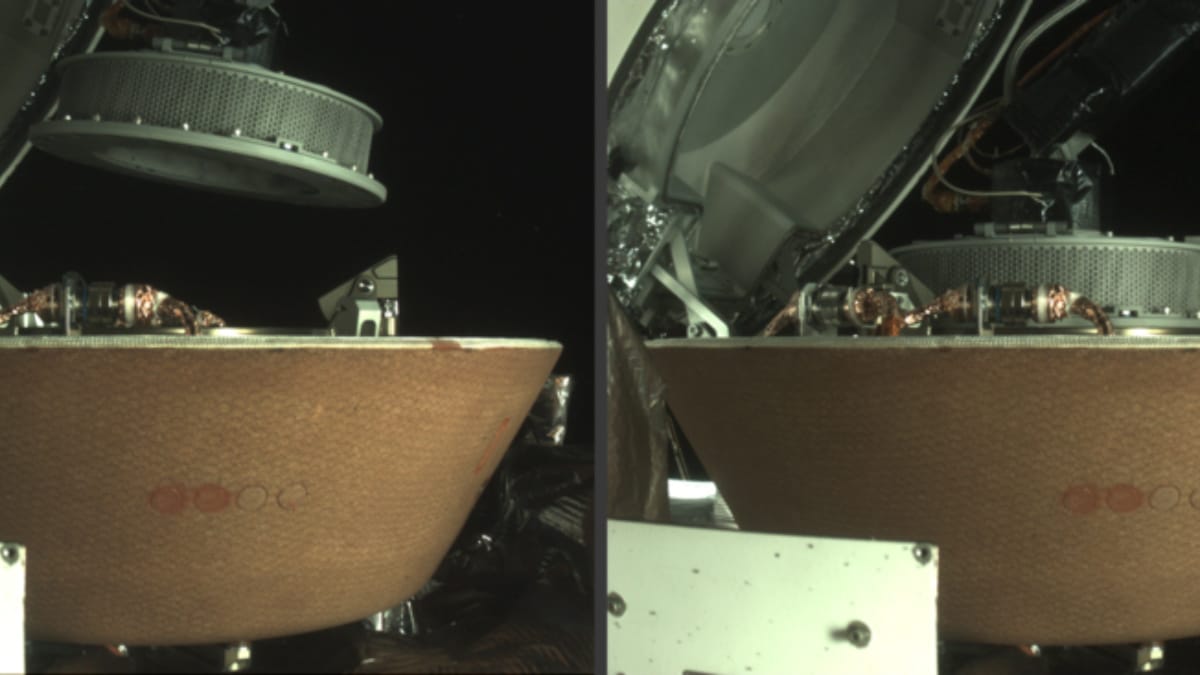 The left image shows the OSIRIS-REx collector head hovering over the Sample Return Capsule (SRC) after the Touch-And-Go Sample Acquisition Mechanism arm moved it into the proper position for capture. The right image shows the collector head secured onto the capture ring in the SRC. NASA / Goddard / University of Arizona / Lockheed Martin

A NASA spacecraft has successfully collected a sample from the Bennu asteroid more than 200 million miles away from Earth. The samples were safely stored and will be preserved for scientists to study after the spacecraft drops them over the Utah desert in 2023, according to the Associated Press (AP).

The asteroid is round and black and larger than the Empire State Building. It is one of the most threatening to Earth, as it has a 1-in-2,700 chance of colliding with the planet, the AP reported.

OSIRIS-REx initially had trouble with the lid after it grabbed more asteroid material than had been required. According to the AP, scientists believe the spacecraft took about four pounds of rock when the minimum requirement was about an ounce. A significant amount of that initial haul drifted away.

“Even though my heart breaks for the loss of sample, it turned out to be a pretty cool science experiment and we’re learning a lot,” said lead scientist Dante Lauretta of the University of Arizona, the AP reported.

The mission team had to work around the clock for two days to ensure a successful sample collection and storage process. They then had to carefully calibrate the alignment of the lid and capsule to keep the sample properly sealed.

The scientists decided not to weigh the sample, but based on visual images, Lauretta estimates that at least two pounds of sample made it into the capsule, CBS News reported. “But of course, we have to wait till 2023 to open up the [capsule] and be sure,” Lauretta said.

“This achievement by OSIRIS-REx on behalf of NASA and the world has lifted our vision to the higher things we can achieve together, as teams and nations,” NASA Administrator Jim Bridenstine said in a NASA statement. “Together a team comprising industry, academia and international partners, and a talented and diverse team of NASA employees with all types of expertise, has put us on course to vastly increase our collection on Earth of samples from space. Samples like this are going to transform what we know about our universe and ourselves, which is at the base of all NASA’s endeavors.”

OSIRIS-REx will now linger by Bennu until at least March 2021. Its return trip hinges on the asteroid and Earth aligning in order to maximize fuel efficiency, CNN reported.