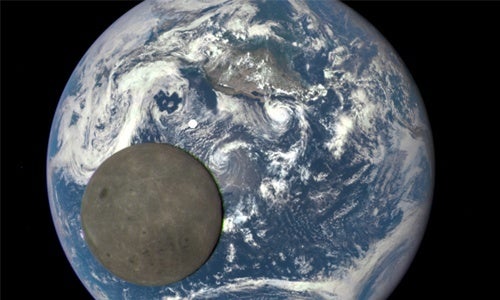 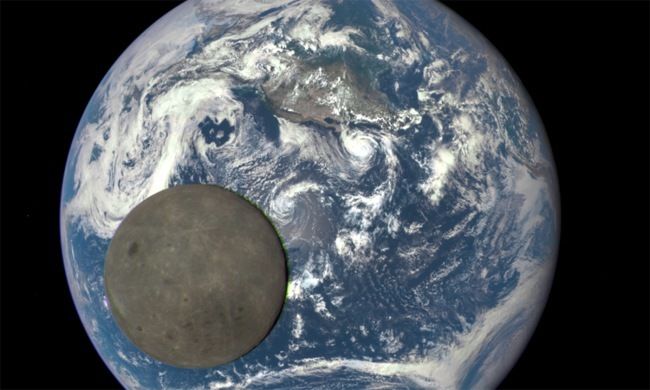 The dark side of the moon was captured by a NASA camera as it crossed the face of the Earth. Photo credit: NASA

The DSCOVR studies the solar wind (in layman’s terms: space weather) so that NASA, the National Oceanic and Atmospheric Administration (NOAA) and the U.S. Air Force can better predict weather from activities like solar flares. But a side benefit is the breathtaking images of Earth’s surface that it snaps from its location about a million miles from Earth. The moon last month entered EPIC’s frame and the spacecraft caught the moon’s backside on camera. This is not the first image of the far side of the moon, which was captured by the Soviet Luna 3 spacecraft in 1959. Since then, several NASA missions have captured the moon’s far side “in great detail,” said NASA in a statement.

Michael Brown, an astronomer at Monash University, called the images “captivating.” He told The Guardian, “It’s unusual because you need a spacecraft that has gone beyond the moon to get a picture of the moon like this … We don’t normally get that perspective.”

A million miles may sound far away, but it’s much closer than the May 2008 image of the lunar far side, which was shot from 31 million miles away. “It is surprising how much brighter Earth is than the moon,” said Adam Szabo, DSCOVR project scientist at NASA’s Goddard Space Flight Center. “Our planet is a truly brilliant object in dark space compared to the lunar surface.”

If you’re wondering why we can’t ever see the far side of the moon, it’s because “the same side of the moon always faces an earthbound observer because the moon is tidally locked to Earth,” explains NASA.

Once EPIC begins regular observations next month, NASA will provide daily color images of Earth. These images, showing different views of the planet as it rotates through the day, will be available 12 to 36 hours after they are acquired.

And just like with the “Blue Marble” image of Earth that grabbed everyone’s attention last month, President Obama tweeted this image, too:

Pretty incredible time lapse of the dark side of the moon passing Earth from @NASA. American ingenuity at work! pic.twitter.com/JKep9bcxGQ