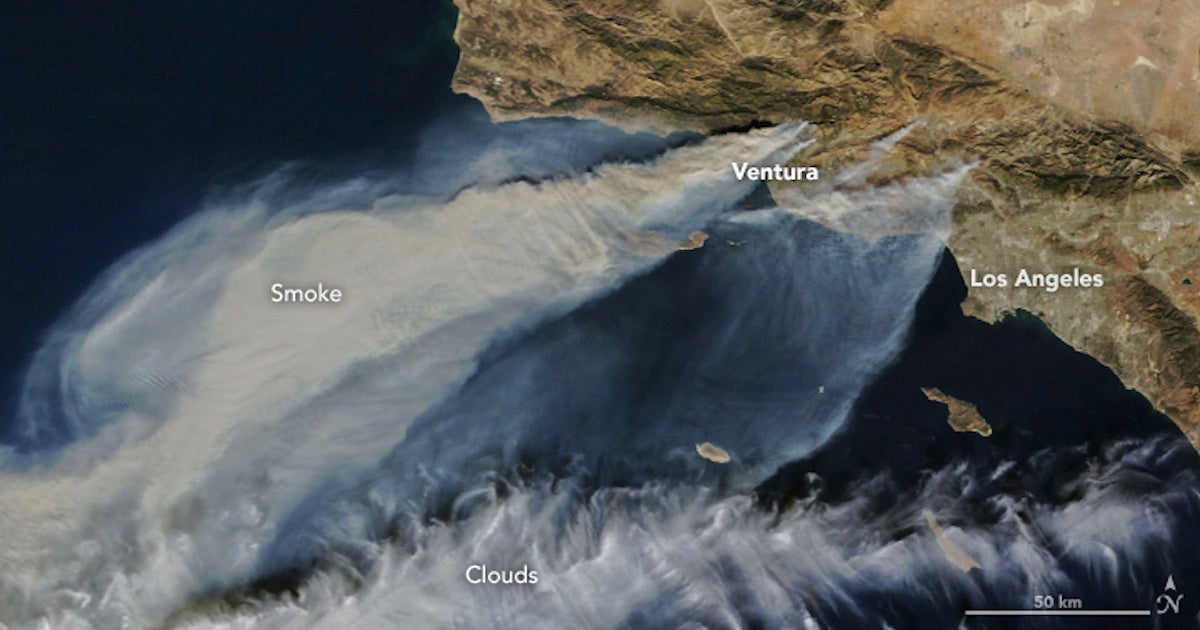 The Moderate Resolution Imaging Spectroradiometer on NASA's Terra satellite captured this natural-color image in the afternoon on Dec. 5, 2017. NASA

NASA’s Terra satellite captured an image that shows the billowing smoke from three
wildfires raging in Southern California on Tuesday.

The stunning photo shows the
Thomas fire in Ventura County, the largest of the ongoing blazes, as well as the smaller Creek and Rye fires in Los Angeles County.

According to the latest updates from Cal Fire, the fast-moving Thomas Fire has burned an estimated 65,000 acres and 12,000 structures are threatened. The Rye fire and the Creek fire have charred 5,000 acres and 11,400 acres respectively.

The latest outbreaks come not long after October’s string of devastating wildfires in Northern California that killed 44 people—
the deadliest in state history.

ABC7 News reported that the Golden State has been experiencing a higher frequency of intense wildfires in recent years, with 13 of the largest 20 wildfires in state history breaking out since 2000.

“Our, if you want to call it, seasons have been elongated by upwards of 40-50 days over the last 50 years and continues to do so,” Cal Fire Deputy Chief Scott McLean explained. “We had the five years of drought. A lot of trees died, over 102 million trees died.”

Scientists have linked California’s fires to rising temperatures as well as years of epic drought that dried tree canopies, grasses and brush that spark wildfires.

“There’s a clear climate signal in these fires because of the drought conditions connected to climate change,” Daniel Swain, a climate scientist at UCLA, told InsideClimate News.

“As long as there’s fuel to burn, your chances of having large fires increases when you increase temperatures. It’s that simple,” added Park Williams, a bioclimatologist at the Lamont-Doherty Earth Observatory at Columbia University.

As NexusMedia reported, the years 2014, 2015 and 2016 have been the third, second and first hottest years on record to date, and each of these years hosted its own record-breaking fire in the state.

The ongoing flames have also been whipped by hot, dry and powerful winds. The National Weather Service said Monday that the area is experiencing the strongest and longest Santa Ana wind event it has seen so far this season.

Critical Red Flag conditions will persist over most of Los Angeles and Ventura through Friday.