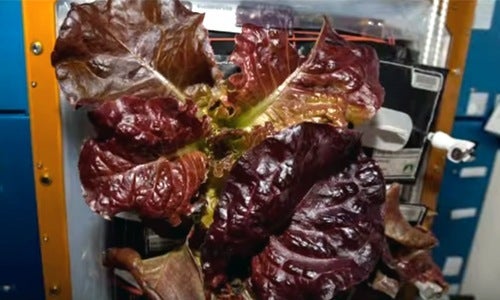 3 astronauts will harvest and taste space-grown lettuce today at 11:15am on @NASA TV… http://t.co/C7LVQGyw5P pic.twitter.com/kFNvikrV2z

Expedition 44 crew members, including astronaut Scott Kelly who’s on a special year-long mission in space, will be dining on a crop of “Outredgeous” red romaine lettuce from the Veggie plant growth system that’s sitting on the station itself.

Called the Veg-01, the experiment aims to “study the in-orbit function and performance of the plant growth facility and its rooting ‘pillows,’ which contain the seeds,” according to a NASA press release.

The Veggie unit, which is expandable and collapsible, contains a light bank that features a flat panel red, blue and green LEDs for plant growth and crew observation (which explains why the plants are glowing pink in some photos). Half of the harvest, which was plucked 33 days after it was initially planted, will be eaten. The other half will be packaged and frozen on the station until it can be sent to Earth for analysis.

NASA said that the idea behind the out-of-this-world fare is to provide future astronauts with sustainable food supplements especially for long-distance trips, like to Mars.