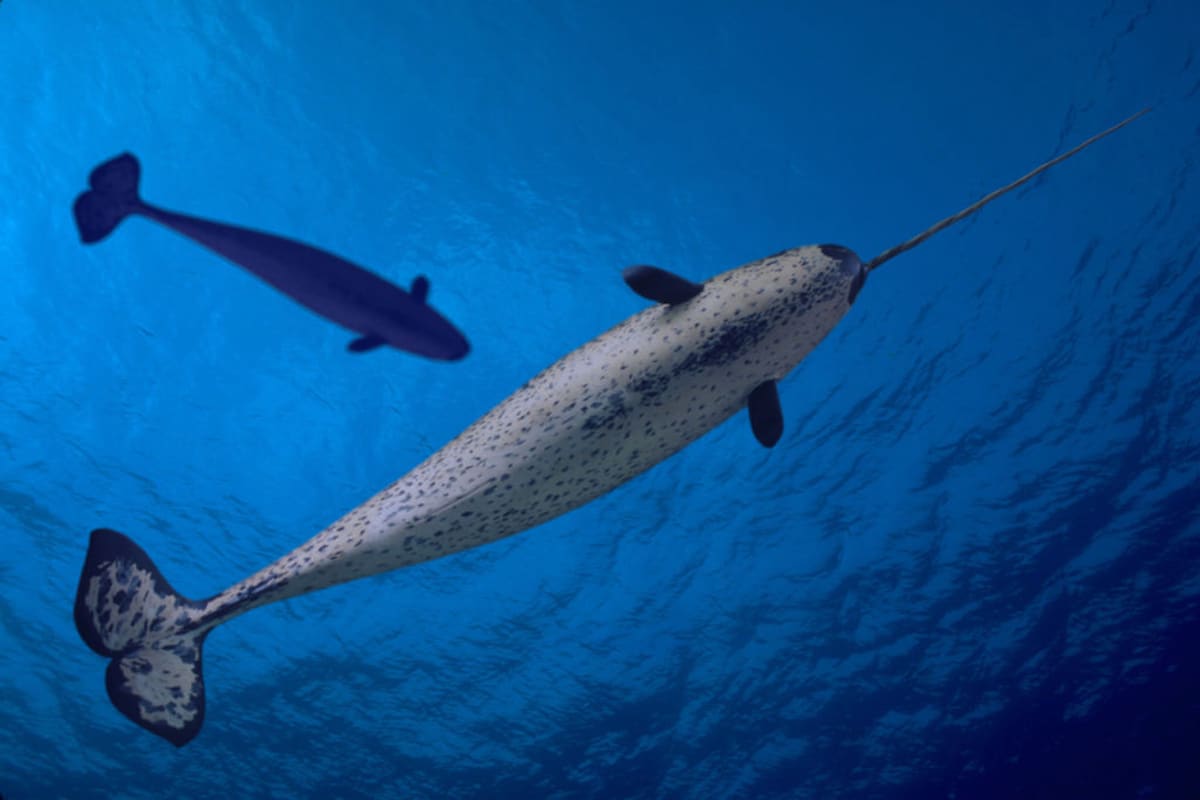 The Arctic is a vast expanse of blue and white that holds still in perpetual hushed simplicity. This frozen universe, mostly undisturbed by humans for thousands of years, has retained the pristine quietness of Earth when it was born. After millennia of natural protection by virtue of its extreme climate, the Arctic has the majesty of still peaks, remote places where humans rarely go. Its grandeur is illustrated by the creatures who have been protected for so long from our tumultuous and destructive wake.

As the Arctic becomes more habitable due to global warming, it also becomes more vulnerable. The region has been invaded by equipment to conduct seismic surveys and blasts from mining operations, not to mention cruise ships, and with them new sounds have been introduced — foreign sounds in a pristine world. And for some creatures, sound is everything.

At the depths narwhals hunt — up to 1800 meters, or nearly 6,000 feet — there isn’t any light, so sound is very important to them. They navigate by echolocation like bats, by emitting click sounds. From far away, the hammering of human activity may sound like a soft “puh,” like dropping a bag of grain, but to narwhals these sounds are the equivalent of being inside a loud, clanging bell; completely disorienting.

One of many mystical creatures in this region, narwhals (Monodon monoceros) have a long tusk that has led them to be referred to by some as the unicorns of the sea. Their tusk is actually a large tooth with as many as ten million nerve endings inside and can grow as long as ten feet, according to the World Wildlife Fund. The tusk may be used as a sensory organ for the detection of everything from temperature to water pressure and motion, according to the Exchange for Local Observations and Knowledge of the Arctic. It is also flexible and can move about a foot in all directions.

A group of researchers has conducted experiments with narwhals showing that the stress response is so extreme to sounds even many miles away that it can cause them to stop feeding. The research was published in a paper, “Narwhals react to ship noise and airgun pulses embedded in background noise,” in the journal Biology Letters.

“The narwhals’ reactions indicate that they are frightened and stressed. They stop emitting the click sounds that they need to feed, they stop diving deep and they swim close to shore, a behavior that they usually only display when feeling threatened by killer whales. This behavior means that they have no chance of finding food for as long as the noise persists,” explained one of the study’s researchers, Outi Tervo, a marine biologist with the Greenland Institute of Natural Resources, Phys.org reported.

As marine biologist Dr. Susanna B. Blackwell — who is also a research associate at the University of California, Santa Cruz, and senior scientist at Greeneridge Sciences, Inc. — told EcoWatch, the stress responses are normal for mammals in situations where they’re confronting something unfamiliar and unsettling, which the presence of humans and their activities certainly are in the Arctic.

“If you are eating your dinner and suddenly you hear a noise that puts you on alert (like somebody is in your yard or house, for example), would you not stop eating? Narwhals are mammals and we can only assume they react similarly to other mammals in similar situations,” Blackwell explained to EcoWatch.

Historically, narwhals have been difficult to study because they live in what is referred to as the High Arctic — a region covered by ice. The researchers tagged the members of a narwhal herd in East Greenland’s Scoresby Sound fjord system and exposed them to the noise of a ship’s engine, as well as to that of a seismic airgun. With the assistance of the University of Copenhagen, the Greenland Institute of Natural Resources (Pinngortitaleriffik) analyzed the research data found through these experiments.

“Our data shows that narwhals react to noise 20-30 kilometers away from a noise source by completely stopping their clicking sounds. And in one case, we could measure this from a source 40 kilometers away. It is quite surprising that we can measure how something so far away can influence whale behavior,” said Susanne Ditlevsen, a professor in the University of Copenhagen’s Department of Mathematical Sciences, who was in charge of the statistical analyses of the research data, reported Phys.org.

“Even when a ship’s noise is lower than the background noise in the ocean and we can no longer hear it with our advanced equipment, the whales can hear and distinguish it from other sounds in their midst. And so, to a degree, their behavior is clearly affected. This demonstrates how incredibly sensitive narwhals are,” Ditlevsen added.

Narwhals’ sensitivity to sound may have genetic as well as environmental components. Most of them have never been exposed to the harsh sounds of industrial human activity.

“To some extent, the ability to adapt to a new environment with new sounds likely has a genetic basis. For example, in bird species that can be found in the same environment, some are tolerant of anthropogenic disturbance while others are not,” Blackwell told EcoWatch. “The other factor that plays for narwhals is the fact that until recently, and throughout their evolutionary history, narwhals have been very isolated from anthropogenic sounds and activities. Therefore, they have not had a chance to develop a tolerance towards such sounds and to think of them as part of their environment.”

Another danger for narwhals is that, as researchers observed, when the whales are fleeing a boat they make more strokes with their tails, which drains vital energy and oxygen needed to dive to the depths they do to feed, Phys.org reported.

Researchers observed that, after a week of the sonic tests, the narwhals returned to their normal behavior. But, as Tervo explained, if the whales are exposed to disruptive sounds over an extended period, such as regular boat traffic from a nearby port, they might have difficulty hunting effectively for a longer amount of time, which “could become quite serious for them,” said Tervo, as Phys.org reported. “In this case, we fear that it could have physiological consequences for them and impair their fitness.”

Tervo went on to say that the Arctic is changing so quickly that the researchers fear narwhals won’t be able to adapt without increased efforts to put protections in place.

“Knowing how sensitive a species is to disturbance allows for management decisions to be made to minimize impacts on the whales. For example, disturbing sounds could be limited to areas or seasons during which the whales are not present, or locations that are known not to be important feeding grounds,” Blackwell told EcoWatch.