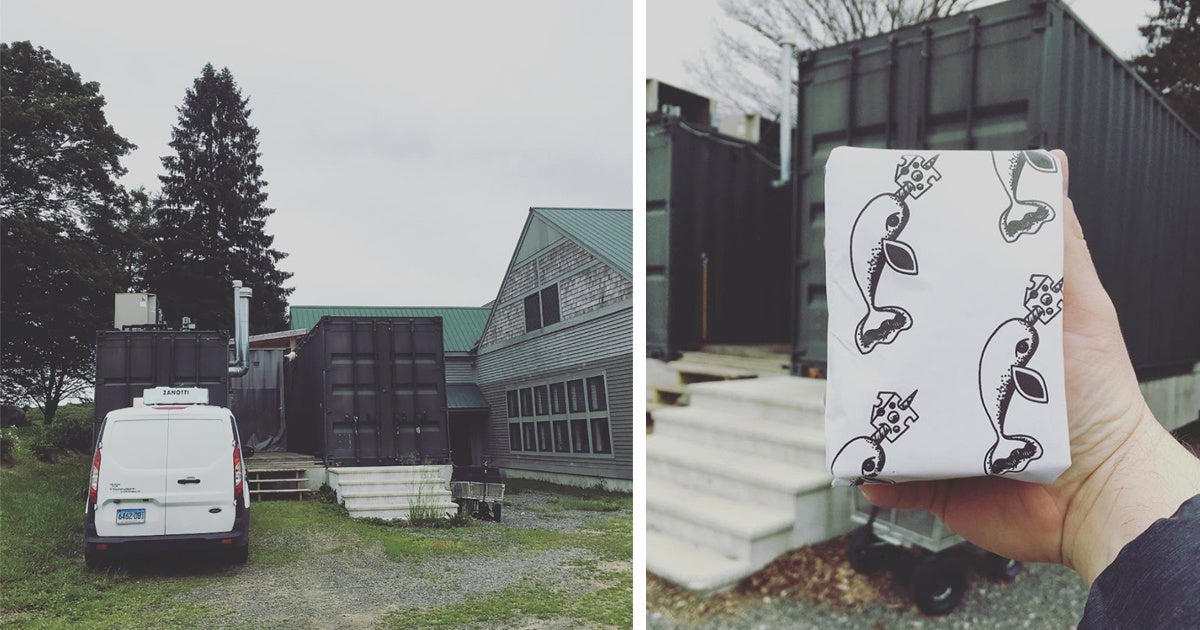 The so-called “cheese pods” that have helped the Mystic Cheese Co. grow are actually upcycled containers, now being used by food producers across the country.

On a 900-acre family-run dairy farm in Lebanon, Connecticut, two shipping containers sit among the barns and fields. Inside, in what is probably one of the smallest cheese-production facilities in the country, Brian Civitello creates cheeses that are winning the hearts of professional and home chefs alike.

Soft-ripened and buttery, with a mildly sweet yet tart taste, Mystic Cheese Co.’s signature product, Melville cheese, is a kitchen workhorse. Great in pastas, grilled cheese sandwiches and any dish that calls for melty cheese, it can be found in restaurants and specialty markets throughout the United States. But this cheese, along with four other types that the company now produces, wouldn’t exist without the upcycled shipping containers that Civitello fondly refers to as “cheese pods.”

“We never would have been able to grow without the pods,” said Civitello. “They allowed us to test the waters and focus on developing the brand.”

Across the country, people now use upcycled shipping containers to grow mushrooms and herbs and even serve as restaurants. But when Civitello and his business partner, Jason Sobocinski, began Mystic Cheese Co., in 2013, their use in food production was relatively new. “We were just throwing spaghetti against the wall,” said Civitello.

The containers let them keep costs and production time low. By taking milk directly from cows on the farm for cheese production, they have been able to age 30,000 pounds of cheese a year on average. The process blends Civitello’s love of technology with lessons learned from a childhood growing up on a small family farm. After spending his early 20s as a DJ, Civitello was inspired by his Italian grandfather to study cheesemaking in Italy. He learned how to make cheese over an open fire in a copper pot from a cheesemaker in the Alps and studied industrial production from some of the larger cheesemakers.

“I like technology, and I don’t mind industrial production,” said Civitello. “I thought if this guy is in the mountains, doing it by hand, how are these guys making it? What I learned is that there are parts they keep their hands on and parts that can be done by more efficient systems. Cheesemaking is a mix of science and art.”

Yet, when Civitello returned from Italy, producing cheese was an afterthought. He started a consulting business for cheesemakers but grew tired of doing what was essentially damage control on mistakes made during the construction of production facilities. Wanting to make a mobile infrastructure he could build and send to cheesemakers, he created the pods that became Mystic Cheese Co. “Mystic Cheese Co. took off so fast that we disbanded the consulting business,” said Civitello.

This fall, the company will more than double their production capacity by moving into a 4,000-square-foot facility. There, they’ll not only ripen cheese but also open a full-service cheese shop and café that will connect to a brewery in the same building. Not bad for a company that started out of two eight-by-40-foot containers.

From Mushrooms to Meat Processing

Over the past few years, the use of upcycled shipping containers in the food industry has exploded. Here are just a few of the ways they are being used.

In shipping containers in Brooklyn, Smallhold has a mushroom nursery that grows the vegetables until they’re ready to be put into miniature farms at restaurants throughout New York City.

A Solution to Filling the Food Gap

To create a year-round food supply, the Community Food Bank of Eastern Oklahoma installed a vertical farm in two eight-by-40-foot shipping containers that can produce up to 1,800 heads of lettuce and other leafy greens every 45 days.

A number of restaurants, including the Miami-based Charcoal, call shipping containers home.