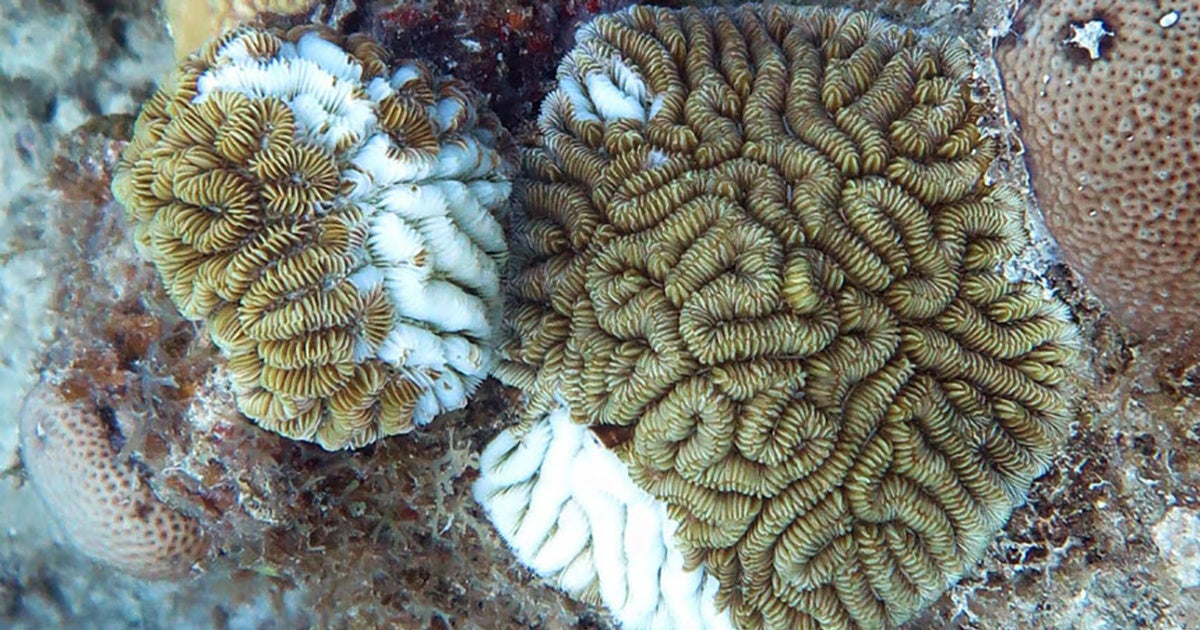 Lesions (white) eat into the tissue of maze corals on Flat Cay reef, near St. Thomas in the U.S. Virgin Islands. The lesions are caused by a new and deadly disease that's spreading through the Caribbean. Marilyn Brandt

Marine biologists are dealing with a mystery. What’s killing the coral reefs in the Caribbean?

The scientists first noticed a deadly outbreak earlier this year off the coast of St. Thomas in the U.S. Virgin Islands. Big white lesions were breaking up the colorful tissues of stony corals. Some corals died the next day, bleaching completely. Others suffered for weeks, but within four months, more than half the reef died off from the mysterious disease, as Science News reported.

Researchers estimate that the mysterious disease is now affecting around a third of the Caribbean’s 65 reef-building species, but they remain unsure if the disease is microbial, bacterial, viral or something else.

“Whatever the cause, it’s annihilating whole species,” said Marilyn Brandt, a coral ecologist at University of the Virgin Islands, leading a research team studying the outbreak, as Medical Daily reported.

Brandt’s team is trying to figure out what is causing the disease by looking at the corals’ microbiomes — the colonies of microbes that live in and on the corals. The researchers have to perform the arduous task of figuring out what normally belongs on corals and what doesn’t, according to Science News.

So far, the prime suspect in the outbreak is stony coral tissue loss disease, known by its catchy nickname skittle-D, which was discovered near Florida five years ago when it triggered one of the deadliest coral disease outbreaks on record, according to Science News. That outbreak has continued for five years off the coast of Florida and spread over 580-kilometers, surprising scientists since outbreaks usually die off after a few months.

“Anomalously high water temperatures, associated with climate change, are increasing the global prevalence of coral bleaching, coral diseases, and coral-mortality events,” said a study on the outbreak published in the journal Scientific Reports. It went on to say that coral bleaching and disease outbreaks are a consequence of warming sea temperatures.

Warming sea temperatures are a double whammy for corals since it both stresses and weakens corals immunity to disease while also improving conditions for pathogens to survive. Add in pollution and overfishing weakening corals and pathogens are having an easier time taking hold in reefs, as Science News reported.

“Coral reefs just can’t catch a break,” said Brandt. “I feel like we’re playing whack-a-mole,” addressing one challenge after another.

In the U.S. Virgin Islands’ outbreak, skittle-D is merely a prime suspect. The researchers need more time to investigate the cause with the hopes of putting a stop to it.

However, they will need to work fast. Past outbreaks of other coral diseases near St. Thomas took over a year to infect about half the coral cover. This new disease has inflicted the same amount of damage in half the time — spreading faster and killing more corals than any outbreak on record, said Brand, as Science News reported.

“It marches along the reef and rarely leaves corals behind,” said Brandt. “We’re pretty scared.”

Researchers are struggling to keep pace with where and how the disease is spreading, since stony coral tissue loss disease has also been recently reported on reefs off the east coast of Mexico, Jamaica, St. Maarten and the Dominican Republic.