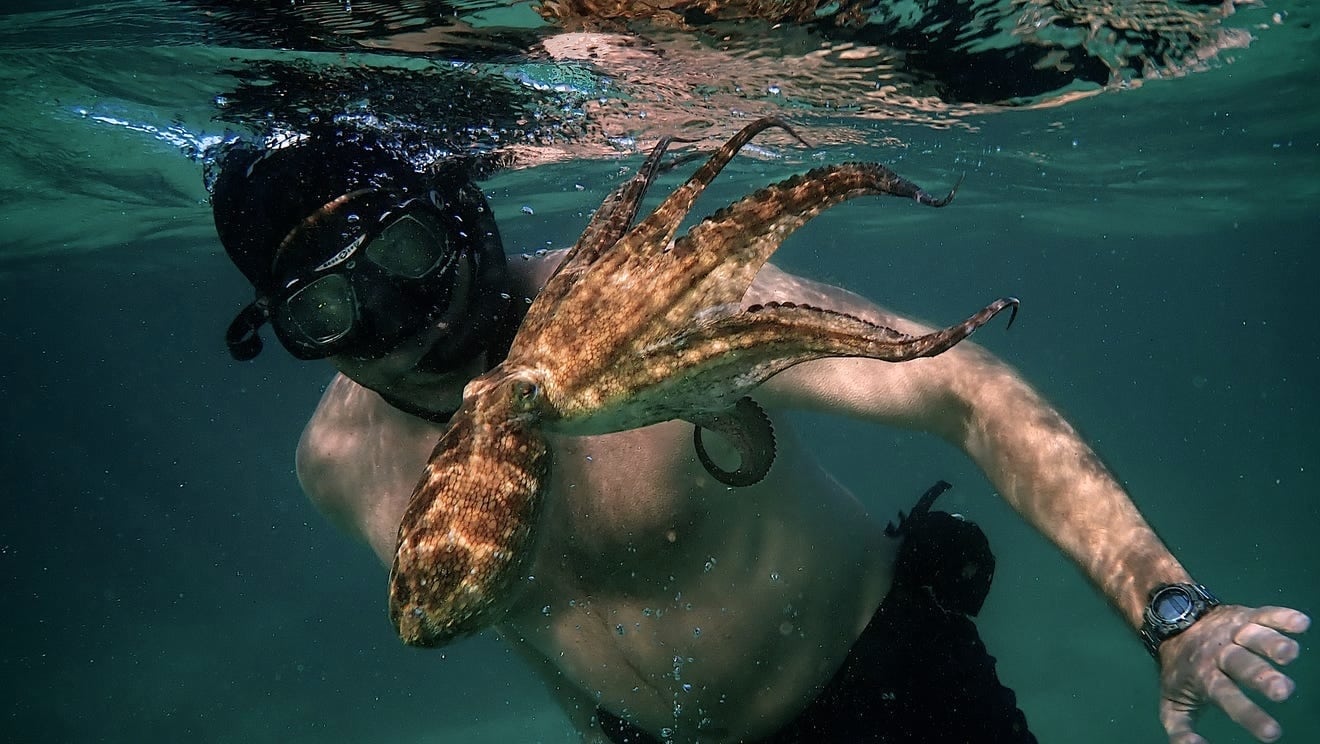 In 'My Octopus Teacher,' Craig Foster becomes fascinated with an octopus and visits her for hundreds of days in a row. Netflix

In his latest documentary, My Octopus Teacher, free diver and filmmaker Craig Foster tells a unique story about his friendship and bond with an octopus in a kelp forest in Cape Town, South Africa. It’s been labeled “the love story that we need right now” by The Cut.

As noted by CNN, the film follows Foster as he battles career exhaustion and depression by going for daily swims in the frigid South African coast.

He becomes fixated upon a common octopus, freediving daily to visit and observe her in her natural habitat. He’s amazed by her ability to find clever ways to evade predators and adapt to her environment.

“Before the viewer’s eyes, the octopus adapts her crab-hunting strategy for lobster, evades a pyjama shark by climbing onto its back, shape-shifts to resemble seaweed and rocks, and otherwise applies her intelligence and creativity to survive,” the NewScientist observed.

Foster’s fascination and curiosity with her are matched by hers with him, according to a review by Vulture. The unlikely relationship between them is a mentorship on the fragility of life and man’s connection to nature, reported The Cut. Their interaction culminates when the octopus swims up to Foster and lands on his chest, in a display of inter-species connection, the review said.

Throughout the film, Foster tracks the octopus’ movements and thereby transports viewers into the octopus’ natural world and point of view in a way that has rarely been done before, reported BizNews. It brings a “level of consciousness few have experienced before him” to the life of the cephalopod, and some celebrities have vowed never to eat octopus again after watching it, according to the news report and USA Today.

“If you gain the trust of that animal over a period of months, it will actually ignore you to a certain degree and carry on with its normal life, and allow you to step inside its secret world,” Foster told CNN. “The octopus showed me many behaviors that were completely new to science because this animal trusted me.”

Foster told CNN that the greatest lesson the octopus taught him is that humans are part of the natural world and not simply visitors.

The film was backed by the Sea Change Project, an NGO Foster co-founded to create awareness about the South African sea forest. The ecosystem stretches for 800 miles along the coasts of Namibia and South Africa, according to VOA News.

“Our group, our whole idea is to try and get this great African sea forest, kind of the home of the octopus teacher, recognized as a global icon, like the Serengeti or the Great barrier reef, because nobody really knows about it and no one realizes just how important this ecosystem is in terms of biodiversity, in terms of how important it is for the planet,” Foster said, reported BizNews. “People have sort of forgotten that the biodiversity of nature is our life support system.”

Several international publications have listed My Octopus Teacher as a must-see, including The Washington Post, Hollywood reviews, and even scientific articles, according to BizNews. It has already won several prestigious awards, including best feature at the EarthX Film Festival.