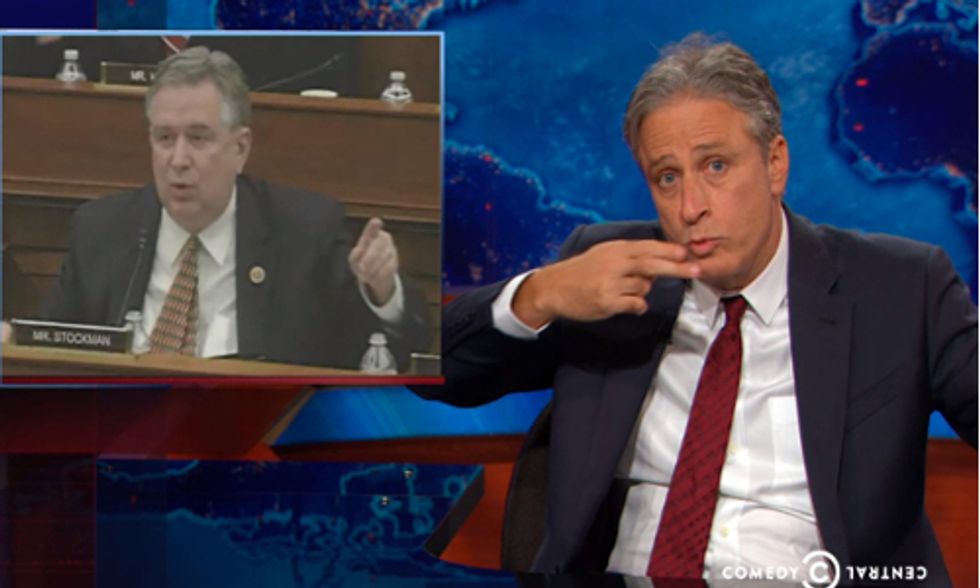 In last night's segment of The Daily Show, host Jon Stewart commented on Sunday's People's Climate March in New York, asking, "You may be thinking, do we really need a march to raise awareness of global climate change? I mean, it's an accepted scientific phenomena pretty much everywhere."

"Here's why you need the march," he says, answering his own question. "It's accepted pretty much everywhere—but there's one place called the U.S. House of Representatives Committee on Science, Space and Technology." He illustrates his point with jaw-dropping clips of House members on that committee interviewing John Paul Holden, President Obama's senior advisor on space and technology issues.

In one clip, Texas Congressman Steve Stockman explains that he doesn't believe in rising ocean levels, saying, "When your ice cube melts in your glass, it doesn't overflow—it's displacement!" "How far back to the elementary school core curriculum do we have to go to get someone on the House Committee on Science, Space and Technology caught up?" exclaims Stewart, pounding on his desk in exasperation. "Do we have to bring out the papier-mâché and soda so you can make a %#$^&$ volcano?"

In another clip, Indiana Congressman Larry Bucshon offers that climate change has been disproved because "there's public comments out there that that question has been asked and answered saying no." "You should look at the scientific literature rather than the public comments," offers Holdren. "With all due respect, Rep. Bucshon," says Stewart, "I suggest you get the Journal of Applied Meteorology and Climatology as opposed to the YouTube comment feed of Obummerlies1776."

It wouldn't help. Bucshon goes on to say, "Of all the climatologists who depend on the climate changing to keep themselves publishing articles, I could read that but I don't believe it." Stewart then reveals who Bucshon's three biggest campaign contributors are. You won't be surprised to learn their identities.