Must-See: 'Racing Extinction' Exposes the Secrets Others Don't Want You to See 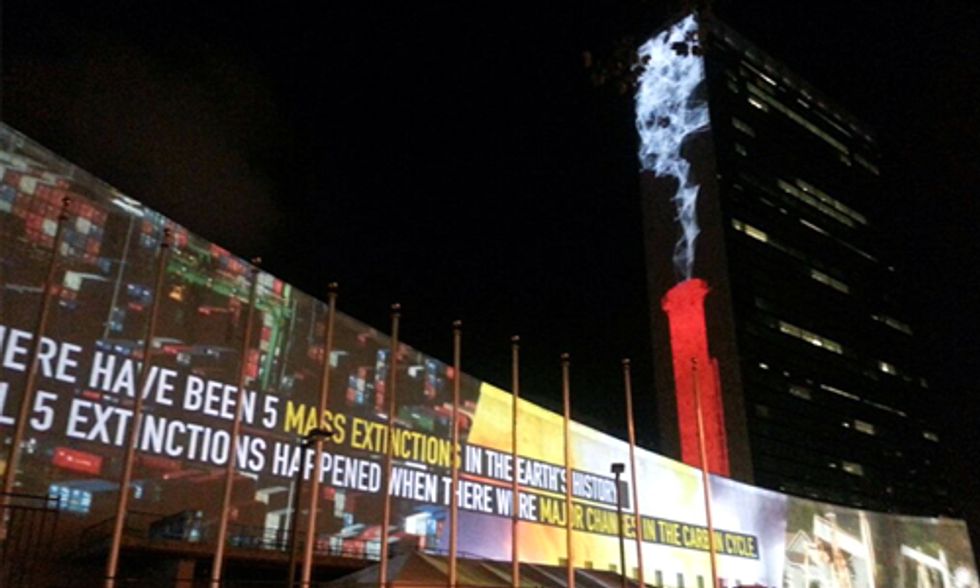 “Better to light one candle than curse the darkness.” —Shawn Heinrichs in Racing Extinction

In September of 2014 at around 10 p.m., I stood outside the United Nations building in New York City and watched a massive film being projected across the buildings in front and above me. Endangered species—from small invertebrates to large charismatic megafauna—world groove music and massive flowing images of nature streamed down the side of the 39-story building. Amidst the serene images were also scenes of environmental holocaust—smoke stacks, ecological decay and the threat of extinction to the web of life.

In September 2014, an 11-minute segment of the movie Racing Extinction was shown on the outside of the United Nations building in New York City, two days before the UN Climate Summit and one day before the People's Climate March.

The UN building projection was the filming of the last scene in the documentary, Racing Extinction, just released a few weeks ago by the Oceanic Preservation Society (OPS), the same filmmakers who brought us the Oscar-winning documentary, The Cove.

Earlier this month, I sat in the Boulder Theater in Boulder, Colorado, and watched the Colorado premier of Racing Extinction. The same kind of large-scale effort that projected the film across the UN building permeates the entire documentary. It’s a racing, jet-set, epic kind of film—one that takes on the big problems at a worldwide scale literally racing all over the planet to find, face and fix extinction.

The most intense scene in Racing Extinction is when the film crew gets on board a small manta ray fishing boat in Indonesia. A village fisherman stands on the bow of the boat with a long harpoon in his hand searching the water below. A giant manta ray, maybe 12 feet across and nearly flying through the ocean, surfaces just ahead of the speeding boat. A second later the fisherman lunges into the water, his full bodyweight on the harpoon as it stabs the giant manta ray in the back. Blood fills the water as the ray fights and flails. The film jumps an hour forward as the huge dead animal is hauled atop the boat.

What Racing Extinction does before and after this scene is what sets the film apart from other documentaries such as its predecessor, The Cove. Back on shore, the filmmakers show scenes of dozens and dozens of dead manta rays in just one day of fishing on this Indonesian island—it is an apocalypse, a type of species genocide, that is played out day after day on manta rays and other endangered species across the planet. The film jumps to other scenes of tens-of-thousands of shark fins in Chinese markets, bags and bottles full of endangered species body parts and oils for sale in markets worldwide, all while discussing the holocaust that humans are wreaking on the non-human world across the planet.

Racing Extinction then goes a step farther than just chronicling how human avarice and greed are purposely killing and profiting from the endangered species trade. The film delves deeply into the climate crisis and how it will likely lead to making many of Earth’s species endangered, especially those in the increasingly acidic oceans. Coral reefs dissolve and die before your eyes on the screen and hi-tech carbon-dioxide-sniffing cameras film the exhaust of the millions of planes/trains/automobiles polluting the oceans.

More importantly, Racing Extinction does not just chronicle the potential apocalypse, it also offers some hopeful outcomes and a path forward for everyone to take action. The same genocide that occurred with manta rays on the Indonesian island is now being replaced with a tourism industry that focuses on protecting and restoring the ocean and its species. The OPS team has been helping to educate children in that Indonesian fishing village and develop a tourist trade to replace the slaughter. Further, the entire film and its website is a call to action for people to engage and make a difference.

The two main people on the screen in Racing Extinction are Louis Psihoyos who is the Oscar-winning director of The Cove, and Shawn Heinrichs who is an internationally renowned oceanic photographer and owner of Blue Sphere Media. Another prominent person in the film is Leilani Munter, the “carbon free girl” race car driver who drives the Tesla that is fitted with extremely powerful film projectors that bring the images to life on the side of the U.N. building and wherever the filmmakers go. All three were on hand at the Boulder screening and were extremely gracious to visit with every person who came to see the sold-out event. Behind the scenes were dozens of producers, filmmakers and directors who helped bring the documentary to life.

In the trailer to the film, Louis Psihoyos says, “If you can reach people, you can change them." Racing Extinction is a big-screen attempt to reach people—not just environmentalists and the eco-choir—but also reach children, adventure seekers, educators, decision-makers and people who care of all ages.

As this film races across America and the world, try to catch it in your town or on the Discovery Channel which swiftly picked up the distribution rights. In fact, the CEO of the Discovery Channel said that the channel’s goal with this film and others is to “dump all the pseudo stuff and instead have programming that would impact people to do something.”

Stopping extinction is a race that we can win if we all run together—Let’s Go!

Gary Wockner, PhD, is an environmental activist and writer based in Colorado. Contact: [email protected].

Al Gore at SXSW: We Need to ‘Punish Climate-Change Deniers’ and ‘Put a Price on Carbon’