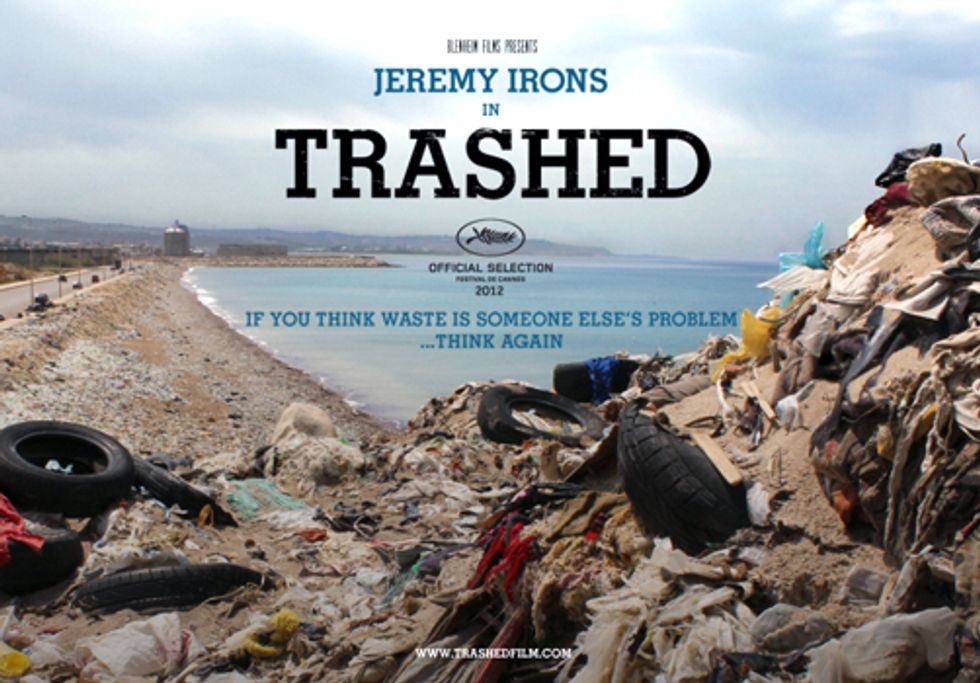 is a documentary featuring its executive producer, actor Jeremy Irons. It examines the encroaching problem of global waste.

Director Candida Brady, who describes herself as a childhood asthmatic and a concerned mother, builds a trajectory that illustrates the impact of waste on land, air and water. We see how marine life is impacted after ingesting toxins from billions of plastic items that do not breakdown after being discarded. Humans, in turn, eat the fish—retaining these contaminants in their systems.

Landfill and incineration emissions accelerate global warming. Referencing the philosophy of Barry Commoner, one expert notes that 150 years ago, waste was comprised of natural elements like wool, paper and wood. Nature was able to break them down. Now, we are left with poisons that get into the food chain. Incinerators spew bottom ash and fly ash. The Arctic is revealed as one of the most polluted places on earth. Iceland has been criticized by its neighbors for being lax with their incinerator standards. It is with justified consternation that Irons observes, “We are at the tipping point.”

Featured is an assessment of the effects of dioxins and how they are transmitted from a mother to her fetus. It takes six generations before toxins are eliminated from the human system. Perhaps the most devastating sequence shows images of the dire ramifications of Agent Orange—sprayed on the South Vietnamese landscape by the U.S. military. The population has suffered ongoing birth defects.

Watch the trailer to learn more:

I reached out to Brady with questions about the documentary:

Why did you get involved in this project?

My interest in waste as an issue was cumulative. It happened over a long period of time and for many reasons—from being influenced by my grandparents’ generation who made everything last, nothing was wasted—to looking into incineration and its effects on communities, ultimately learning about the staggering amount of rubbish in the North Pacific gyre and the work of Captain Charles Moore.

Can you speak to how the effects of having asthma as a child and being a mother have impacted your concern with the issue of global waste?

I think anyone who has spent time battling to regain good health can not help but be profoundly affected by it. When I was a child, my parents were told by one specialist I would be lucky to make it to being a teenager [because] my asthma was so chronic. My father often had to carry me from my bed to the bathroom, and I was a regular at Hospital A & E. I wanted to do everything I could to prevent my children [from] having the kind of experiences I have had. I have said this before, but I am shocked by the amount of kids who now have asthma. I knew one other kid who had asthma when I was growing up.

Like the thousands of scientists, including Nobel Prize winners who signed the Paris Appeal—an international statement on the dangers and effects of chemical pollution—along with hundreds of thousands of other signatories, I am also shocked by the rise in autism and cancer. I see families struggling to cope with so many different health issues, ones that I never encountered growing up. The experts say that we need to address the causes of these illnesses, not just try and belatedly find cures.

You include simple steps to change the trash equation. Do you think a bottom up shift in attitudes can be achieved?

Yes. I completely believe in a bottom up shift, I think we underestimate the power we have as communities and consumers. We all have the power to say, "NO." Grassroots, zero waste, [and] recycling organizations all over the world have been leading the way for years, defeating plans for new incinerators and landfills and so on—showing us how we can all change. People on the ground can also empower the politicians. There are many significant changes happening all over the world. Concord, Massachusetts has just banned the sale of bottled water in units smaller than one liter to reduce waste. Ireland has had tremendous success by not banning plastic bags, but by taxing them instead. Within weeks, bag use had fallen by 95 percent. Encouraging shoppers to provide their own bags, rather than offering them alternatives, makes disposable bags in any form a thing of the past.

At the screening I attended, where Irons was present, he clarified how he wanted to go beyond the problem … to the solution. He hopes the information the film imparts will be an impetus for change on an individual level. He is showing Trashed to legislators in Washington in February. “I think we can change habits,” he said. “It’s just a mental attitude.” He pointed to the fact that New York City recycles only 15 percent of its trash, while San Francisco just reached the 80 percent mark. The key mantra for Irons was, “If each of us does something small … ”