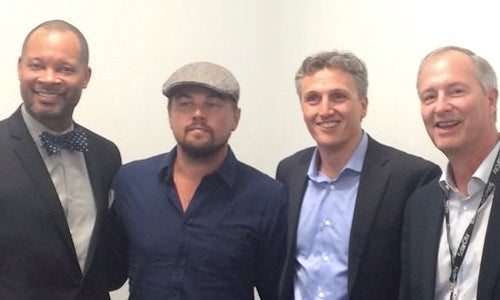 As the battle over Nevada’s solar-killing fees wages on, state lawmakers, government officials and prominent renewable energy advocates descended upon Tesla’s Gigafactory near Reno this week to discuss the future of clean energy in the Silver State.

At Wednesday’s event, attendees were given a tour of the still-in-construction Gigafactory. Once complete, the massive $5 billion battery plant will be 100 percent powered by renewable energy sources, with the goal of achieving net zero energy.

The Associated Press reported that actor and environmental activist Leonardo DiCaprio was also at Gigafactory the same day to film a documentary he is directing on green energy. He was not part of the program but reportedly interviewed Tesla CEO Elon Musk for the film and met with some organizers and attendees, including Nevada Senate Minority Leader Aaron Ford (D-Las Vegas).

The event was organized by Musk and SolarCity CEO Lyndon Rive to advance the development of solar energy in Nevada and to discuss how Tesla’s suite of in-home batteries works in tandem with a residential array. As Vegas Inc reported:

[Rive’s presentation focused] on how energy storage batteries and rooftop solar can work to reduce strain on the grid and help utilities operate more efficiently. The batteries, which are already being produced at the Tesla Gigafactory, can store solar-generated power so that it can be used at night or during times of peak power usage.

According to a copy of his presentation, Rive will encourage the lawmakers to look differently at the grid and embrace disruptive technologies, such as rooftop solar and home energy storage.

Though it wasn’t explicitly said, Rive’s comment takes aim at Nevada’s Public Utilities Commission (PUC), which voted in December to increase a fixed monthly fee for solar customers by about 40 percent while simultaneously reducing the amount customers get paid for excess power they sell to the grid.

A fierce net metering battle has since ensued and is framed by media as a showdown between Warren Buffett—whose Berkshire Hathaway Energy owns NV Energy, the state’s largest utility—versus Musk, the chairman and largest shareholder in SolarCity.