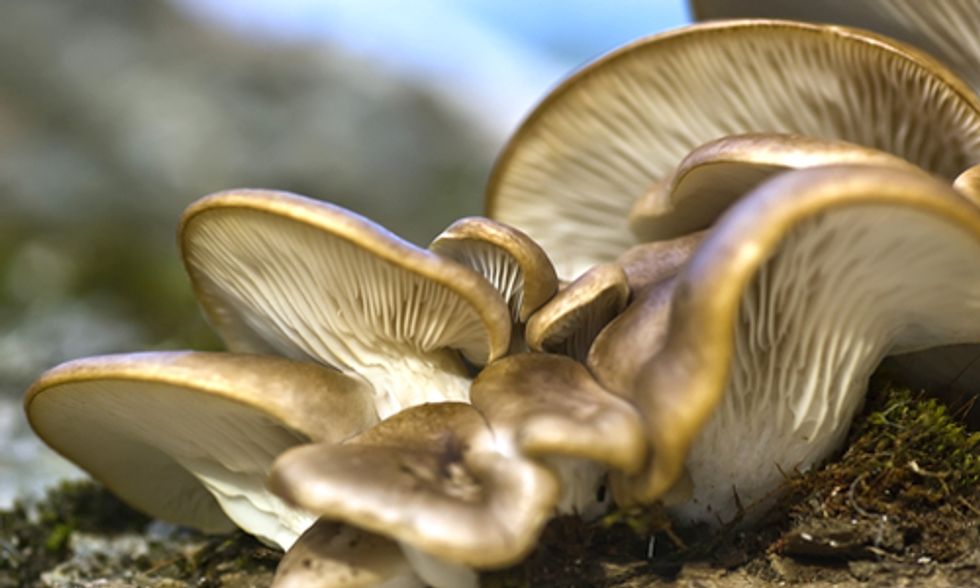 Putting ideas into action, an Oregon-based restoration nonprofit group, Ocean Blue Project, is harnessing the power of mushrooms to clean up pesticides and other pollutants that plague Oregon and national waterways. Yes, mushrooms.

These oyster mushroom have the filtering potential to break down oil, pesticides and harmful bacteria.
Photo courtesy of Shutterstock

The test project launched Sunday, Jan. 19 on the banks of Sequoia Creek, a tributary to the Willamette River. Using recycled burlap bags filled with used coffee grounds, straw and yellow oyster mushroom spawn, the purpose of the unusual potpourri will be to harness the extremely effective filtering capabilities of mycelium.

A kind of root system for fungi, mycelium demonstrate a wide variety of biological powers, from breaking down oil, pesticides and harmful bacteria to acting as natural pesticides against some of the most problematic pests.

Paul Stamets, a leading expert on the power of mushrooms and former speaker at Beyond Pesticides' National Pesticide Forum in 2006, has a word for the natural properties of fungi to fight human-made pollution: mycorestoration. As Mr. Stamets explained to Discover Magazine in 2013, “Oyster mushrooms, for example, can digest the complex hydrocarbons in wood, so they can also be used to break down petroleum byproducts. Garden Giants use their mycelia to trap and eat bacteria, so they can filter E. coli from agricultural runoff."

Richard Arterbury, president of the Ocean Blue Project, agrees. Mr. Arterbury explained to reporters at Corvallis Gazette-Times, that the technique could potentially be a low-cost way to use biologic processes to reduce pollution in waterways. Mr. Arterbury thinks the project has huge potential. “If you put enough of these bags by the Willamette River it could potentially change the river," he said.

And change is needed not just in Oregon. Waterways in the U.S. are increasingly imperiled from various agents, including agricultural and industrial discharges, nutrient loading (nitrogen and phosphorus), and biological agents such as pathogens. Pesticides discharged into our nation's rivers, lakes and streams can harm or kill fish and amphibians.

These toxicants have the potential to accumulate in the fish we eat and the water we drink. As pesticide use escalates and waterways and drinking water become increasingly polluted with unregulated contaminants like pesticides and other toxicants, low-cost and natural alternatives for restoring waterways are desperately needed.

Discussing innovative new practices and alternatives to address pesticide contamination will be just one of the many exciting topics at this year's 32nd National Pesticide Forum, Advancing Sustainable Communities: People, Pollinators and Practices. Please join Beyond Pesticides, Northwest Center for Alternatives to Pesticides and Portland State University's Institute for Sustainable Solutions April 11-12, 2014 in Portland, OR, to help communities everywhere make strides in reducing pesticides and moving communities everywhere towards a more sustainable future.

Visit EcoWatch's BIODIVERSITY and WATER pages for more related news on this topic.