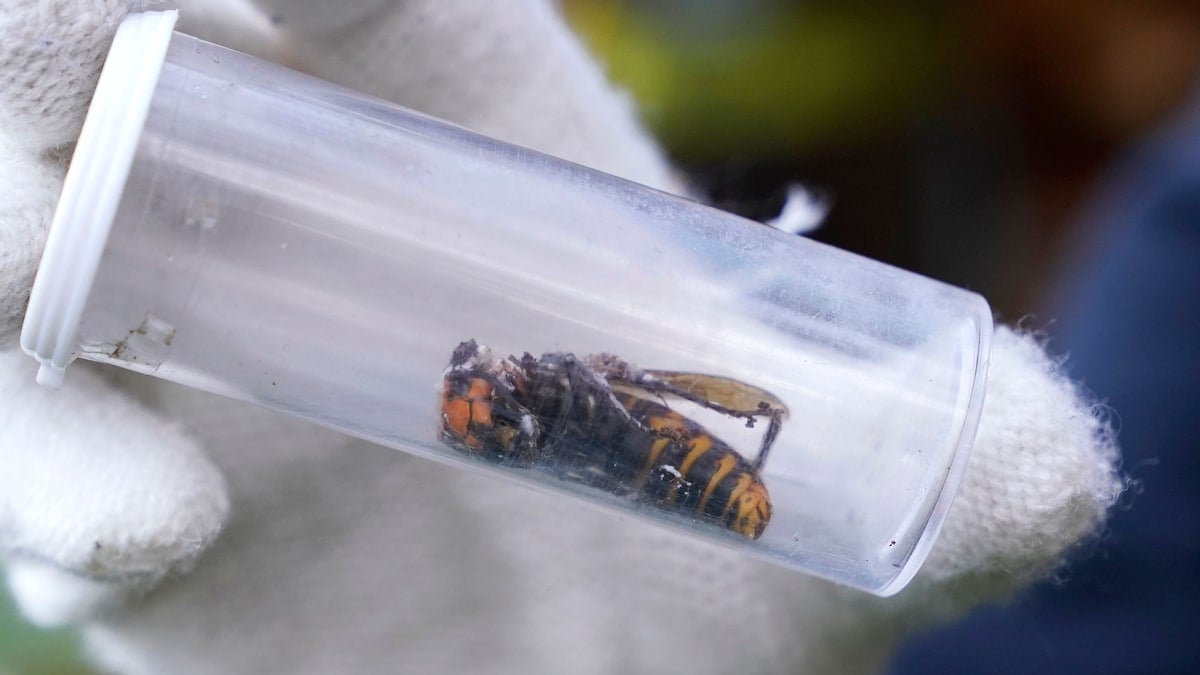 An Asian giant hornet taken from the first U.S. nest to be discovered. ELAINE THOMPSON / POOL / AFP via Getty Images

The first U.S. “murder hornet” nest has been discovered and eliminated.

“Murder hornets,” or Asian giant hornets as they are officially called, first emerged as a concern after four sightings of the bee-slaughtering insects were verified in Washington State in December 2019. Since then, the Washington State Department of Agriculture (WSDA) has been working to prevent the invasive species from establishing a presence in the state, and they made headway towards that goal Saturday when they removed a nest newly discovered near Blaine, Washington.

WSDA workers vacuumed the hornets out of the tree cavity where their nest was found and into canisters, The Associated Press reported. They donned protective gear thick enough to defend them against the hornets’ six-millimeter long stingers. The suits also included face shields because the hornets can spit venom.

The tree will now be cut down and the nest searched for newborn hornets and to see if any queens have already left. Scientists think there may be other murder hornet nests in Washington State.

Quite a morning shooting Asian giant hornets and our WA Ag workers taking them out in Blaine. Love those sting-resistant suits they wear! #MurderHornets pic.twitter.com/K2ZmASinUs

Murder hornets earned their nickname because they attack in groups and can inject a victim with as much venom as a snake bite. They are native to China, Japan, Thailand, South Korea, Vietnam and other Asian countries, where they kill as many as three dozen people every year.

While that may sound like a lot, species of wasps, hornets and bees already common in the U.S. kill an average of 62 people a year, The Associated Press pointed out.

The main danger that Asian giant hornets pose is to honeybees: A small group of them can kill an entire hive within hours, the WSDA said.

Honeybees in Japan have evolved to surround invading hornets and vibrate until they cook the intruder alive, The Guardian reported. But North American honeybees have not evolved with Asian giant hornets, so they would not have any such defense strategies. Farmers are concerned that the hornets could devastate U.S. honeybee populations if they were to spread. This would also have serious consequences for all the foods that bees pollinate.

The WSDA discovered the first U.S. Asian giant hornet nest around 4 p.m. on Oct. 22. The nest was located after the WSDA tied radio trackers to some captured hornets with dental floss, The Associated Press reported.

The rumors are true – our entomologists located the first-ever #AsianGiantHornet nest in the U.S. late yesterday. Press conference at 2 p.m. pic.twitter.com/oXuE6urXff

The first Asian giant hornet was trapped in the U.S. in July, the WSDA said. Since then, its entomologists have been working to locate and eliminate any nests.